Elephants can add a cuddly new cousin to their family tree

A new species of tree hyrax has been discovered. 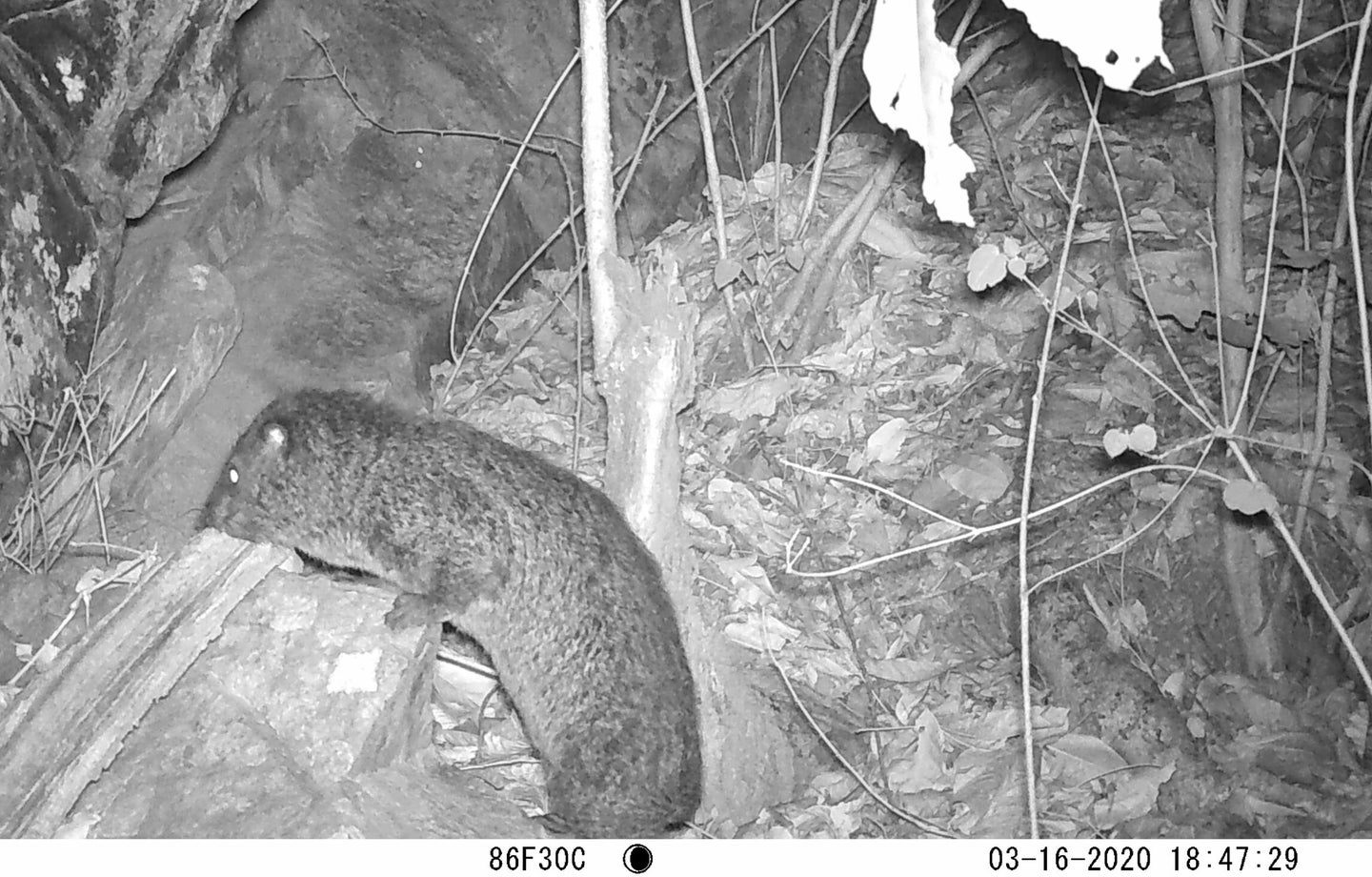 A new species of tree hyrax has been described in west Africa.

Hyraxes are a cuddly-looking group of small mammals that also happen to be the closest living relatives of elephants and manatees. They’re found across much of Sub-Saharan African and parts of the Middle East. Currently, five distinct hyrax species are recognized. The proposed new species would be a sixth and inhabits the forests between the Niger and Volta rivers, in an area encompassing parts of Ghana, Togo, Benin, and Nigeria.

The findings were published June 15 in the Zoological Journal of the Linnean Society, and help to shed some light on these rarely researched, mysterious tree-dwelling critters.

“These are very little-studied animals,” says John Oates, an anthropologist and primate ecologist at the City University of New York who led the research. ”There’s a hell of a lot we do not know, still, about tree hyraxes,” he adds. In decades of studying the animals living in west African forests, Oates says he’d never actually seen a tree hyrax in the wild until he and a colleague installed camera traps and caught one on tape. 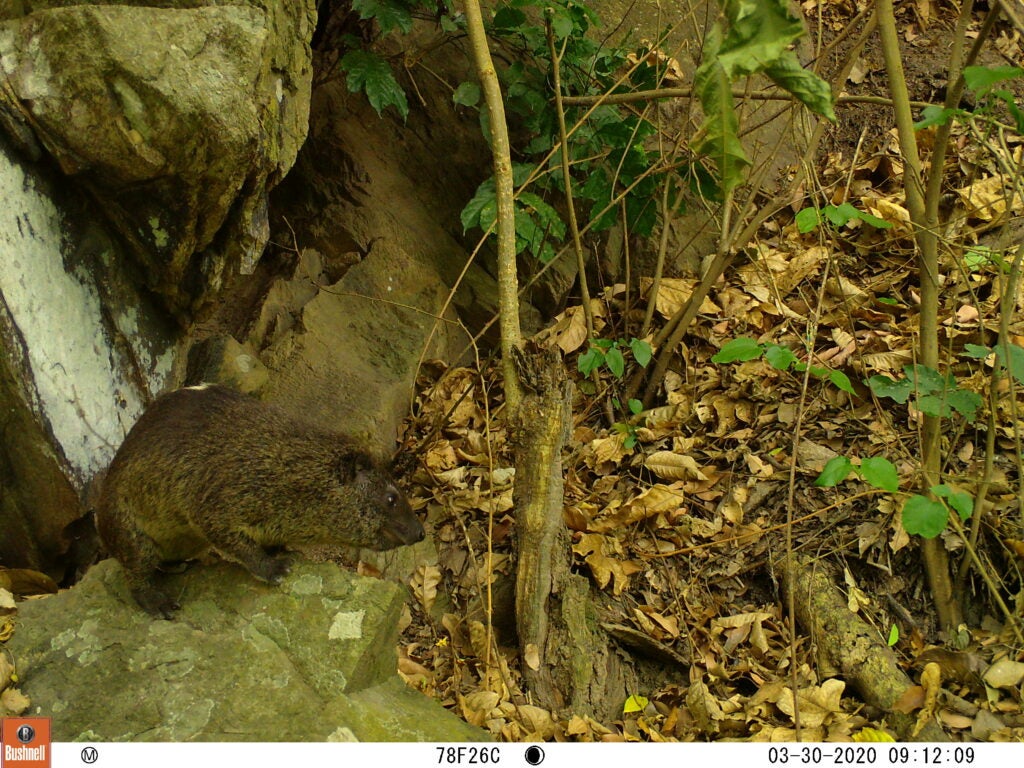 John Oates suspects this picture shows the same Dendrohyrax interfluvias individual as the photo taken at night. Oates was surprised to see the tree hyraxes were active during the daytime as well as at night.

Yet, even unseen, their unique sound gave the previously undescribed species away. Named Dendrohyrax interfluvias, the chunky furball may appear similar to other hyraxes, but has a call that’s very distinct—more bark-like than the expected shrieking call from tree hyraxes in nearby areas.

Simon Bearder, a co-author on the study and an emeritus professor at Oxford Brookes University in the UK, first became interested in the odd call in 2009. He was researching bush babies in western Nigeria with Oates when he noticed an unfamiliar sound in the night. It was a hyrax call, but unlike the ones he had heard on the other side of the Niger river.

With decades of experience studying the sounds of nocturnal mammals in the region, Bearder says he knew right away that he was hearing something unique from other tree hyraxes. “It was immediately obvious to me. The calls were so different, they couldn’t be just closely related, they had to be completely different species.”

Calls are often important for members of a species to recognize each other, find mates, and defend territory, says Oates. “The call will say, as with bird calls, ‘I am here, this is the kind of thing I am…’ If it’s a male bird singing, it may be saying both ‘this is my territory, don’t come here’, if you’re another male, or if you’re a female, ‘look, what a wonderful song I have. Please come and be my partner.’”

[Related: How to decode the secret language of birds]

To confirm Bearder’s initial theory, he and Oates assembled an interdisciplinary team. The researchers analyzed hundreds of hours of call recordings, but also differences in museum specimen’s physical features, as well as hyrax DNA samples collected from local hunters and markets. They found that the skull features, fur color, call sounds, and genetic markers of hyraxes from between the Niger and Volta rivers differed significantly from other western tree hyraxes.

In 2020, Bearder helped another research group identify a different, suspected distinct tree hyrax species in the Taita Hills in Kenya, also through analyzing vocal calls. The more recent—and more comprehensive— 2021 study provides a path forward for the Kenya research group and others, says Hanna Rosti, a nocturnal mammal researcher at the University of Helsinki who lead the 2020 study. “I’ve been reading it with fascination because I can see that this is what we have to do.”

Rosti fell into hyrax research while studying primates, and went from viewing the animals as “weird rodents in the trees” to understanding their true evolutionary uniqueness. “They’re really extraordinary,” she says. “I call them fat balls because they look like a fat ball moving in a tree and their feet are so tiny,” says Rosti, “[their feet] look like small sausages, and they can still climb unbelievably well. I can’t understand how they can climb so elegantly with these sausage-like toes and very round bodies.” 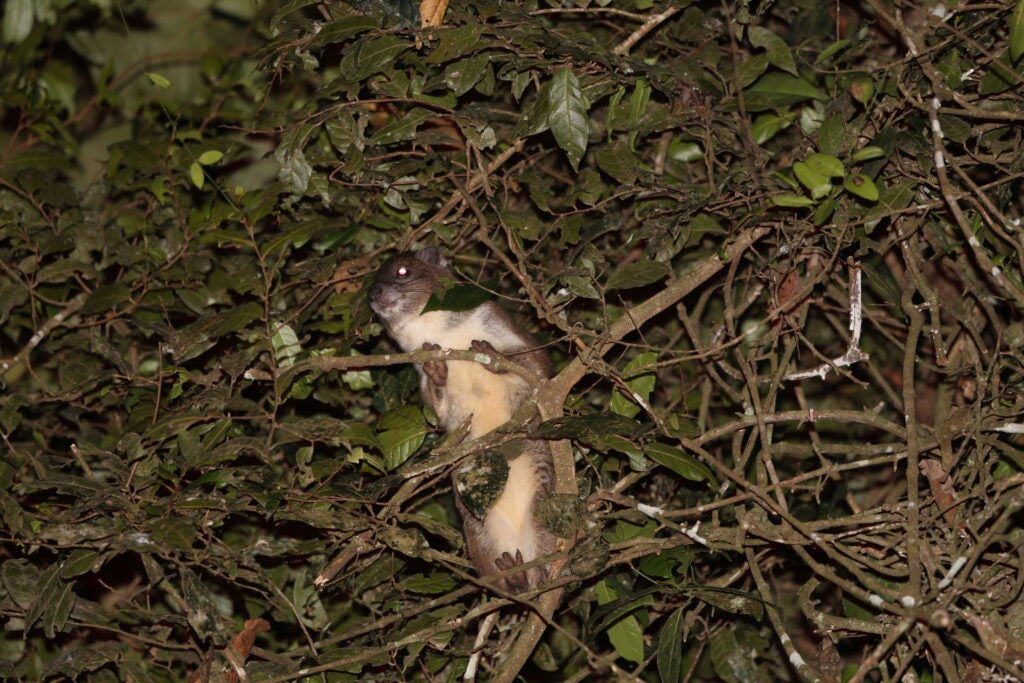 Another proposed new tree hyrax species described by Hanna Rosti and her colleagues in 2020 is found in the Taita Hills of Kenya. Here, its sausage-toes are on display.

As comprehensive as the new study is, though, it isn’t perfect. “[The researchers have] done a really great job in terms of just the number of different angles from which they approached this,” says Paulette Bloomer, a professor of genetics at the University of Pretoria in South Africa who researches hyraxes and was not involved in the study. But she points out that their genetic sample size of 21 individuals is small, contains some gaps, and the portion of genome the researchers looked at likely isn’t telling the whole story.

The new study focused only on mitochondrial DNA, which is passed down through the maternal line. Because mitochondrial DNA is inherited only from one parent, it undergoes less mixture and recombination than other parts of the genome. That makes it better than nuclear DNA for gaining insight into what may have been happening thousands or tens of thousands of years ago, explains Bloomer, but provides less information about more recent patterns. And mitochondrial DNA doesn’t offer much information about the level of difference within a population or species—-only difference between very distinct groups. Because so much variation gets buried, it can be challenging to determine the boundaries of species. “Mitochondrial DNA is only a part of the picture,” says Bloomer. “But it’s a good first picture to get.”

She adds that, although the vocal call data is very strong and the physical analysis also supports the findings, Bloomer may have waited for more genetic data before officially declaring a distinct species. “I’m a very cautious person,” she says. “I would have said, ‘this is an evolutionarily significant unit’. We need to sample in those gaps to understand the radiation of this group.” She hopes that further research addresses those missing pieces, and believes it will reveal even more new species.

“I would not be surprised if we’re going to discover a lot more tree hyrax species in Africa,” says Bloomer.

The newly described species could also be a boon to local conservation efforts. Dendrohyrax interfluvias is likely unique to the small area it was found in, putting it at an increased risk of extinction. Climate change, habitat loss, and human expansion already pose a possible threat to the newly christened hyrax. But Oates says recognizing it as a distinct species gives conservationists a way in. “You can go to your government officials and say, ‘look, do you realize you have a unique animal here, among these others, and nowhere else in the world? Here is another reason to try and conserve this.’”