FYI: Can Snakes Really Be Charmed By Music? 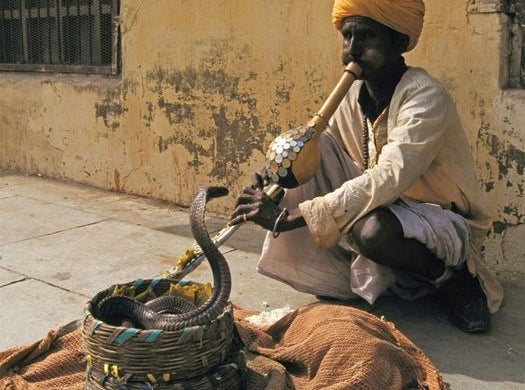 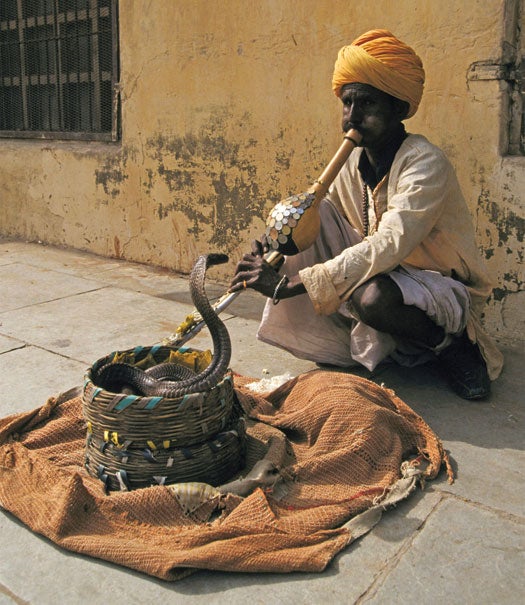 No. The charm has nothing to do with the music and everything to do with the charmer waving a pungi, a reed instrument carved out of a gourd, in the snake’s face. Snakes don’t have external ears and can perceive little more than low-frequency rumbles. But when they see something threatening, they rise up in a defensive pose. “The movement of the snake is completely keyed in on the guy playing the toodley thing,” says Robert Drewes, chairman of the department of herpetology (the study of amphibians and reptiles) at the California Academy of Sciences in San Francisco. “He sways, the snake sways.”

Drewes studies how animals respond to their own calls; his specialty is frogs. Frogs have very good ears, which makes sense, since airborne sound is vital to their procreation: A croaking male calls out to a female. Every call of every frog species is distinct, and Drewes can walk blindfolded into a patch of Kenya’s Arabuko-Sokoke forest and identify 15 different species by listening to their calls. Female frogs have inner ears that are attuned only to the call of their species. He likes a deep, rich pitch, and when he plays the saxophone, he prefers his alto and tenor to his soprano. Although when he travels to Africa, he brings a soprano. “I hate the damn thing, but it fits in my bag,” he says. What do the frogs think of his playing? “I can’t answer that,” he says. “The guy who really knows this stuff is Bernie Krause.”

Krause is a musician and “soundscape ecologist” who has recorded with Stevie Wonder, the Doors and George Harrison (Krause worked on Harrison’s album Electronic Sound, which credits Harrison’s cat for performing on one side). “Some musicians have played music to killer whales or dolphins,” he says, “and what happens is initially the critters that are being subjected to this appear to be curious and want to know what it is, where it’s coming from.” In 1985 he was part of a team that coaxed a lost humpback whale out of the Sacramento River delta with field recordings of other humpbacks feeding.

Krause says that although animals seem to respond to what we call music, how can we know what they think? “Birds bob their heads to beats, bonobos played keyboard with Peter Gabriel,” he says, “but we’re ascribing our attributes to animals. Show me animals appearing to enjoy music that aren’t captive, that aren’t looking for something to alleviate the boredom.” Krause says that we learned our music from the natural world, and in a few small pockets of the globe, groups of humans still sing with nature rather than to it. The Kaluli in Papua New Guinea, he says, “mix their voices in with the sounds of the forest, which is how we first learned polyphony”—singing with more than one voice. Snake charming also may have begun this way, singing and dancing with the snake. But that was thousands of years ago, before we knew snakes couldn’t even hear that toodley thing.

This article originally appeared in the December 2011 issue of Popular Science_ magazine._