Add Graphene To Spider Silk To Create The Strongest Fiber Yet

Web slingers get a high-tech upgrade 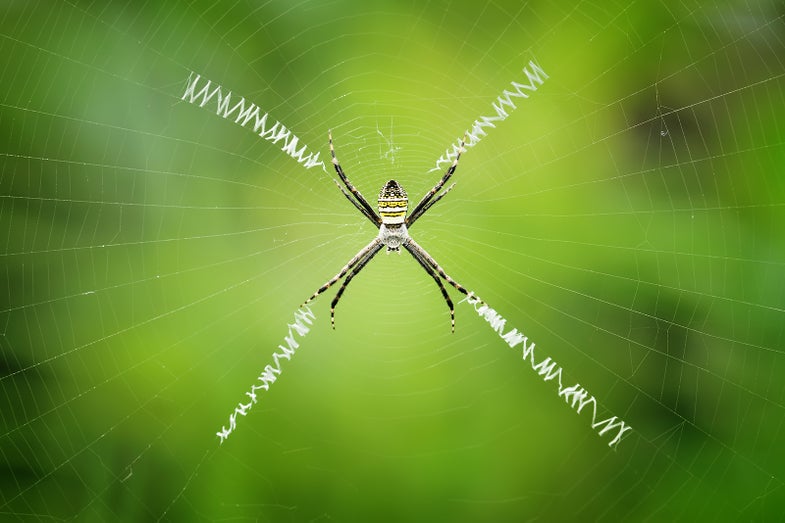 Your move, limpets. Earlier this year, the long-reigning champion of the Strongest Biological Material Competition, spider silk, was usurped by the upstart limpet teeth. But we all knew that the arachnids would not go quietly into the night.

In an unorthodox move, the spiders have teamed up with human scientists to produce the strongest fiber ever known, incorporating graphene into their silk.

In a paper published in ar.Xiv, researchers described how they sprayed a group of unsuspecting spiders with a mixture of water, carbon nanotubes and graphene, then measured the strength of the silk they produced.

The results were basically a reverse of the Spiderman origin story. Instead of a human getting bitten by a radioactive spider and developing superpowers, the spiders were sprayed by humans, and got our amazing gift of…manipulating nano-materials? It might not seem that great, but the silk produced by the spiders is stronger than Kevlar. (The strength of limpet teeth, for the record, was ‘comparable’ to the high-tech silk. A head-to-head slugfest between the two is TBD.)

The scientists still aren’t sure how the spiders managed to get the graphene and nanotubes incorporated into the silk, but they think that the spiders drank the nanoparticle-laced water, and their bodies did the rest. Possible applications of high-tech spider silk could involve use in medical devices like sutures or even nerve regeneration, garments, or electronics.

The details of how it worked, and whether it could work in other plants and animals (we’re looking at you, limpets) remain the subject of future research projects.