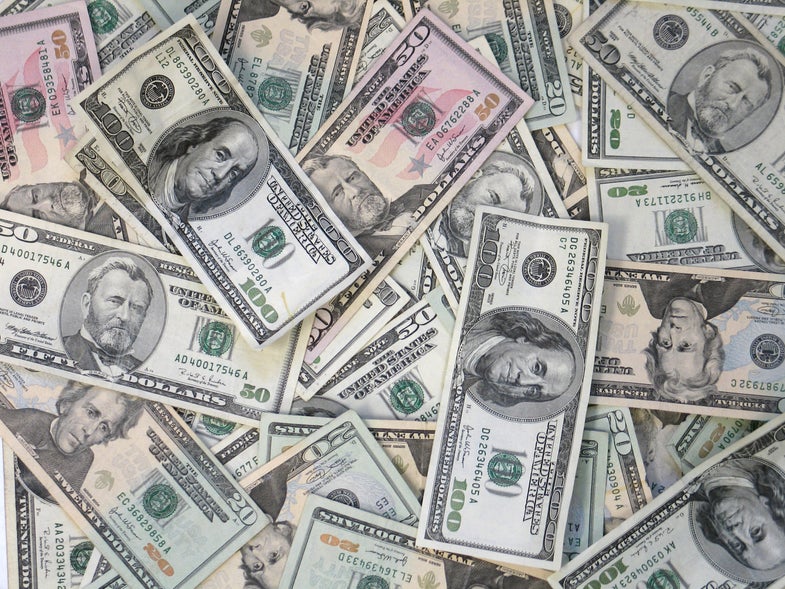 In 2014, the world got rid of 92 billion pounds of electronic waste, and nearly $50 billion worth of recyclable materials. That’s a hefty amount of lamps, laptops and air conditioners that get tossed every year, and it’s only getting worse.

A new report from the United Nations University found that over the next three years, that number is expected to rise to over 110 billion pounds.

Let’s put that staggering number in perspective by looking at some of the more interesting numbers in the report. Take the United States: The UNU report estimates that the U.S. generated 48 pounds of electronic waste per person in 2014. If you think of an average laptop (and not one of the sleek, new 2-pound Macbooks, but a typical, 4.4-pound average laptop) it’s the equivalent of every person in the United States throwing out 11 laptops every year. 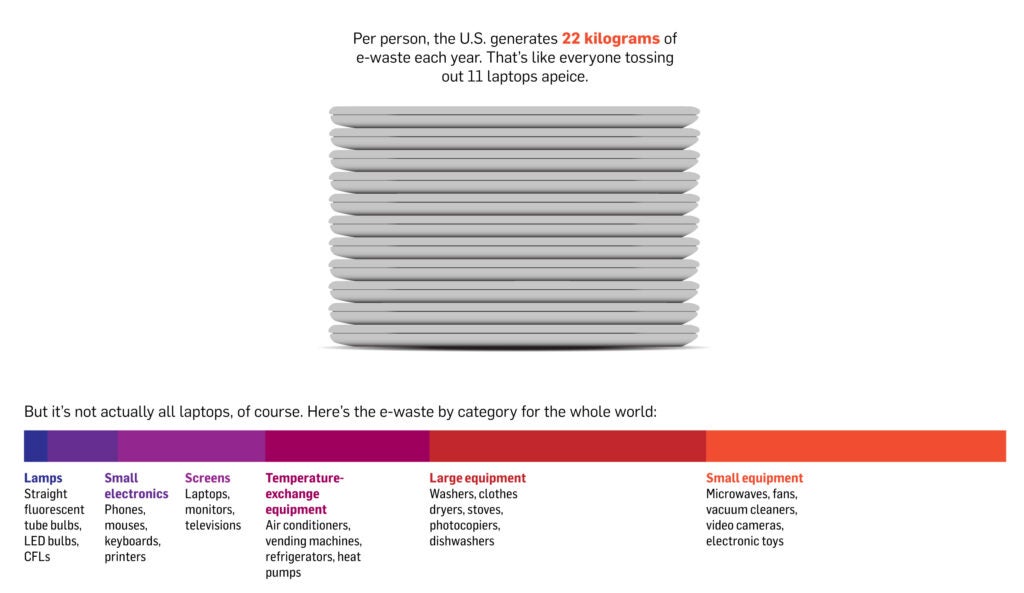 But, as the chart above makes clear, not all of our powered disposable gadgets are as portable as a laptop or a smartphone. The report’s data also include much heavier items like freezers, washing machines, stoves, and copiers, which push the numbers up.

But there’s one key thing to remember: Asia has a much higher population than Europe. So much higher, in fact, that it actually produces more electronic waste annually than any of the other regions. Last year, Asia produced roughly 34 billion pounds out of the total 92 billion pounds.

A Silver, Gold, And Plastic Lining

So where does all this once beeping, whirring, wired junk go? Though many places are making an effort to safely dispose of electronic waste (which can contain hazardous materials like mercury, lead, and ozone depleting elements), a lot of electronic waste ends up in landfills and illegal sorting facilities around the world.

The report found that only a little over 15 percent of the world’s total electronic waste was recycled at the highest standards, which is a pity considering all of the valuable materials found in electronic waste. There are a lot of components that go into electronic products, and they don’t just vanish when the object gets thrown away. Plus, recycling electronic waste has a few different benefits. For starters, there’s the fact that manufacturers don’t have to get fresh materials from the ground. The EPA estimates that recycling one million laptops could save enough electricity to power 3,657 homes. Plastics can become auto parts, garden furniture, and other objects, while metals can be reused in jewelry and more electronics.

Of course, when steel, lead, platinum, and plastics are wired together in a machine, it becomes a challenge to get them out. But the UNU report quantified the value of extracting them. While it may not be economically viable right now to get every single valuable plastic, metal, or other material out of electronic waste, it’s certainly a supply line that’s worthy of consideration. For example, the amount of gold in discarded electronics worldwide last year was equal to 11 percent of the gold mined out of the Earth in 2013. That’s a lot of shiny.

If we’re willing to start mining our poop for gold, maybe taking a closer look at recycling electronics isn’t such a bad idea?