What Rescue Robots Can Learn From Fire Ants

Ant-Man to the rescue! 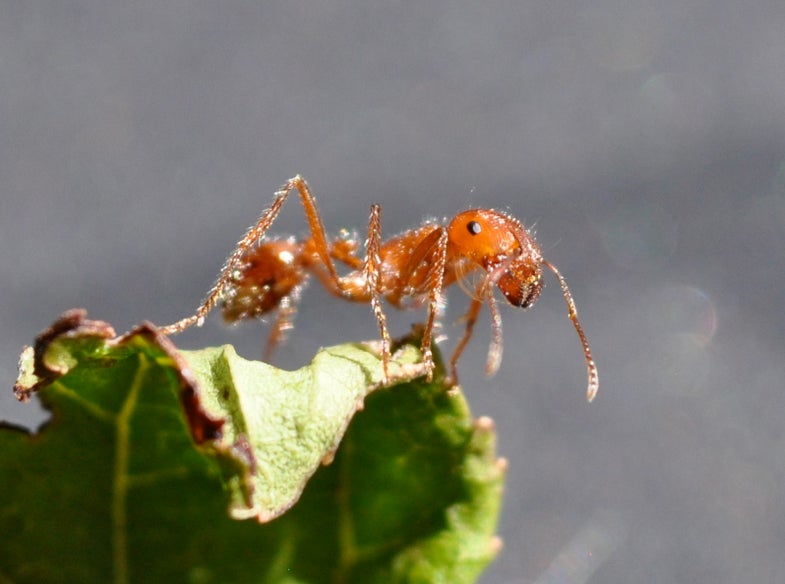 The stinging agony of a fire ant bite is one of those things that remains seared into your psyche for all time. But while most people’s instinct is to stay very far away from these insects, a closer look at how they build their tunnels shows that there’s a lot we can learn from them.

A study published recently in the Journal of Experimental Biology examined the ability of fire ants to build stable tunnels in a variety of soil types. The species’ versatile engineering skills have enabled it to gain a foothold across the southern and western United States.

The researchers used a CAT scan to watch how the ants build their homes in three dimensions. They found that the ants were able to swiftly excavate the soil, using moisture in the soil to create little mud balls, then carrying them out of the way in a highly methodical dis-assembly line. Even when the ants were capable of building larger pellets to carry out of the tunnel, the ants kept assembling and carrying out pellets of the same size–a decision the authors think enables the ants to have multiple workers working back and forth simultaneously without the tunnels getting blocked.

Fire ants can dig a home even in loose, sandy soils–a behavior that would be very useful for rescue robots. After earthquakes or landslides flatten buildings, rescue robots might be able to slither into tight spaces, lift heavy objects and look for victims from the air. But in the aftermath of a natural disaster, with precarious, loose rubble pinning victims in place, a more delicate touch is called for, and creating stable tunnels in the midst of chaos could mean the difference between life and death.

“When we want to send in teams of robots in the natural environment, you have the problem of getting in each other’s way, and jamming things up,” lead author of the study Dan Goldman told BBC News. “So [these insects demonstrate] how large teams can work in cramped conditions and even create structures in loose materials.”