After years of research, we may be close to full-scale production of super-strong spider silk 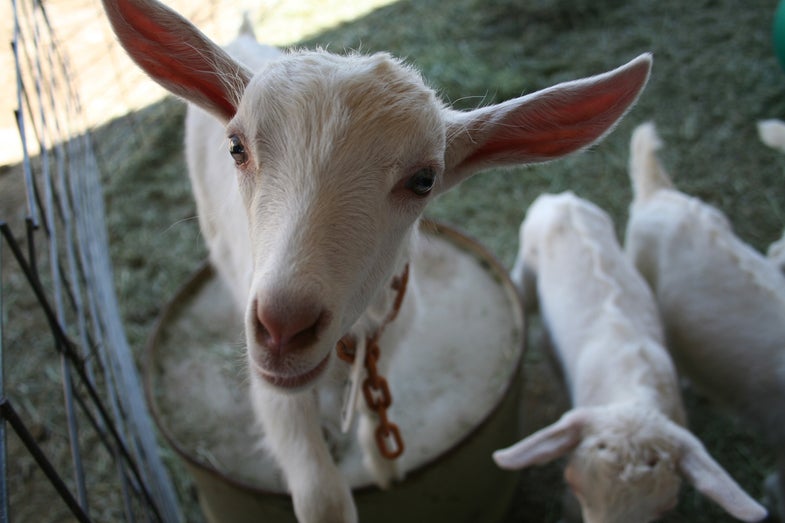 Mutant silkworms can produce miles of super-strong silk, in a new breakthrough that could lead to mass production of tough, flexible spider-silk material. Thanks to the efforts of these genetically modified spider-worms, along with spidergoats and spider-alfalfa, spider clothes may soon be upon us.

Randy Lewis, a molecular biologist at the University of Wyoming, has been milking his spidergoats for a couple years now, and he’s been trying to improve yields of genetically engineered spider-silk alfalfa. He’s researching improved synthetic spider silk genes, and he hopes to start growing spider cotton in the near future. With his latest research, spider fabrics might only be a year away.

Last week, Lewis and Malcolm Fraser at the University of Notre Dame announced they bred silkworms that had been genetically engineered to produce spider silk.

“From our perspective, there are huge advantages to the fact that the fiber is already spun,” Lewis said. “You don’t have to purify the protein, you don’t have to take it and spin fibers.”

Lewis said the study, which has not yet been published, proves the concept of engineering and breeding transgenic silkworms.

“The real question is going to be, can we make the necessary improvements in the mechanical properties of the silkworm silk by incorporating the spider silk in it? If we can do that, then obviously it makes a whole lot of things possible in terms of the amount of material you can make.”

A single silkworm cocoon contains more than a half-mile of silk thread, so colonies of transgenic silkworms produce plenty of silk, said Fraser, a molecular biologist at Notre Dame. He believes industrial production of engineered spider silk could happen within a year.

Spider silk is one of the most valuable materials in nature. It could be used for a vast array of products, from artificial ligaments to super-strong wound dressings or even body armor. Lewis envisions spider-silk replacement tendons, parachute cords and more.

Silk could even be used to transport drugs or act as nanoscale transistor scaffolds. In a study last year, scientists at Legacy Clinical Research & Technology Center in Portland, Ore., demonstrated that silk-based brain implants containing adenosine can suppress seizures in rats. In a paper published in the journal Science in July, Tufts University researchers said silk could be used to build flexible and degradable displays or even implantable optical systems for medicine.

“There’s lots of things you can do with fibers that you can’t do with something that comes as an amorphous blob or a solid,” Lewis said.

Nano-fabrics could be even stronger than spider silk, but as of now they’re impossibly small. Last week, Canadian researchers reported building the longest-ever polyyne chain — polyyne carbon-carbon bonds are even stronger than those in graphene — but it was only 44 carbon atoms long.

Nano-sized fibers are still limited. “We can make textile quantities of the silkworm silks,” Fraser said. “Nanotechnology is certainly something that has some awesome potential, but I don’t know how soon that potential will be realized, and even if it is realized, I’m not sure that it would replace many of the medical applications of natural silk fibers, which are considerable.”

Lewis has been working on those applications for two decades. It’s been 12 years since he first isolated the genes that produce high-performance spider silk, and he garnered international attention for his transgenic goats, whose DNA has been altered to produce the proteins necessary to make spider silk. When the goats give birth and start lactating, they produce spider silk proteins in their milk, which is collected, purified and spun into silk, Lewis said.

It would be easier to milk spiders than mutant goats, if only spiders were not so murderous and territorial. As it is, spider farms have not proven a successful venture, whereas there are long traditions of farming both silkworms and goats. Scale makes a difference too: Lewis can get half an ounce of silk from every quart of milk. It would take 100 spiders to obtain that amount.

Transgenic silkworms could be even more productive. Breeding them involved some sneaky DNA, however. Kraig Biocraft Laboratories Inc., a Lansing, Mich., firm, partnered with Fraser, who discovered and patented a DNA transposon called “piggyBAC.” The transposon can insert itself into a cell’s genetic material. The researchers used piggyBAC to incorporate snippets of spider DNA into silkworm embryos, resulting in silkworms that spin a hybridized part-silkworm, part-spider silk.

The researchers wanted to be sure they could breed the spiderized silkworms, so they also added fluorescent protein to the spider DNA. The mutant silkworms had glowing red eyes, and their silk was fluorescent green. 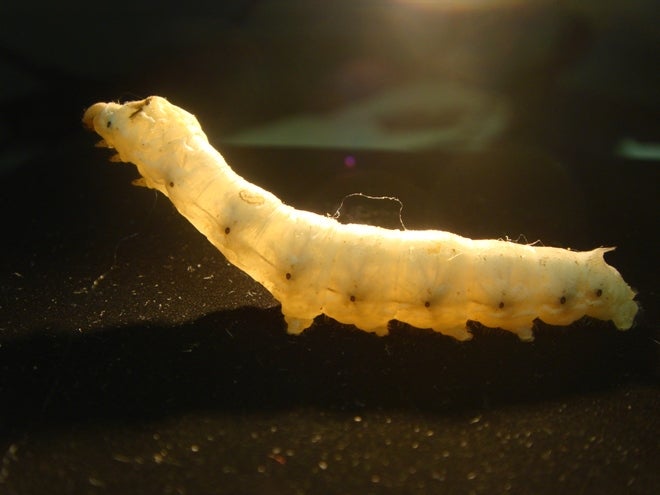 A mature silkworm is pictured just before it starts spinning its transgenic silk.

Fraser said he is completing molecular analyses before submitting his study to a research journal. Meanwhile, he hopes to continue improving the snippets of spider DNA — especially if scientists obtain a sequence for a brand-new spider just discovered in Madagascar. The Darwin’s bark spider makes the largest webs in the world, spinning silk that is 10 times stronger than Kevlar.

Fraser also studies HIV and hepatitis, and he hinted that piggyBAC-hacked silkworms might be useful for other applications: “Silk isn’t the only protein that silkworms can produce,” he said.

Lewis said his highest priority is figuring out the fastest and most efficient way to produce large quantities of silk. He also hopes to continue isolating new spider silk genes and incorporating them into his formula. As of now, his formula is a blend of several different spider proteins, mainly from the golden orb weaver.

“If we can take and use something that nobody is going to eat and that doesn’t have much value, and use that as a production system, then we have very little impact on food and fiber, and we can use the methods that are already out there,” he said.

Then spider clothes might not be far off at all.