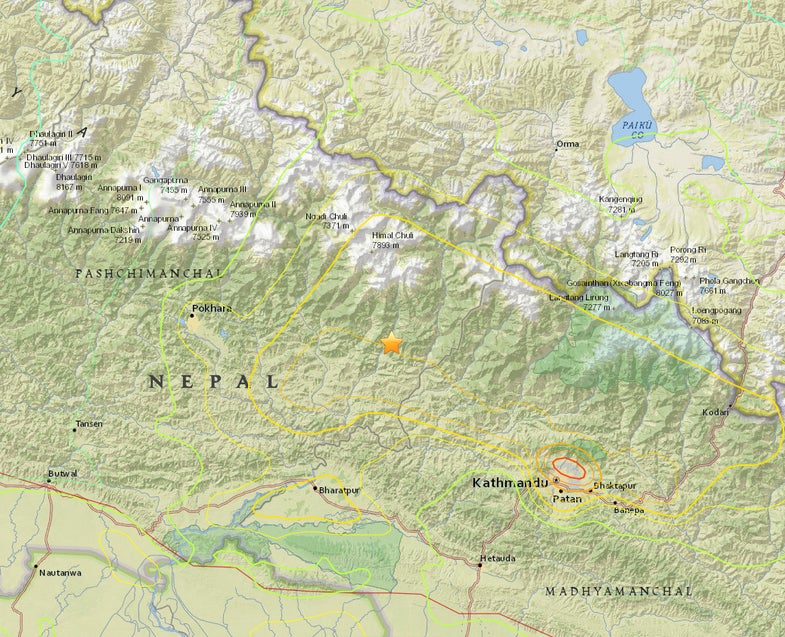 An earthquake struck Nepal early Saturday causing numerous casualties, large amounts of damage to structures and avalanches on Mount Everest where a closely watched climbing season was just getting started.

The magnitude 7.8 earthquake occurred only 50 miles away from Nepal’s capital, Katmandu. Noticeable shaking was felt in the Indian city of Delhi, over 650 miles away. It was recorded on seismic monitors as far away as Norway.

Even two days after the quake, strong aftershocks are rattling the region, and should continue for the next month.

The AP reports that over 4,000 people died in the quake. Initial reports from the United States Geological Survey’s (USGS) rapid assessment program, PAGER categorize the event as a red alert. In a red alert, “high casualties and extensive damage are probable and the disaster is likely widespread.”

The shaking triggered avalanches on Mount Everest, wiping out camps, injuring dozens and killing at least 18 people according to the AP. Avalanches triggered by aftershocks continue to hamper efforts to reach climbers trapped further up the mountain. Last year, an avalanche in April killed 16 Sherpa guides, a tragedy that brought the climbing season to an abrupt end.

Historic buildings in Katmandu were particularly hard hit, with many reduced to rubble after the quake hit. The Australian Broadcasting Corporation’s Siobhan Heanue tweeted out some incredible photos and video of the devastation in the capital.

Anatomy Of A Quake

Though it might seem like the Himalayas are one of the most immutable features of our world, they are still being built. The massive peaks are still getting pushed higher by the collision of the Indian subcontinent into Asia.

On average, the Indian plate is pushing northward at a rate of 1.77 inches per year. That’s a steady, fairly quick pace in geological terms. But the movement of the earth’s tectonic plates isn’t like the smooth movement of gears in a machine. There is a lot of friction between the plates, which can halt the process, building up huge amounts of energy along a fault as the plates try to keep moving. When the pressure gets to be too much, the earth jerks in a sudden and devastating release, cracking along a fault, or fracture in the earth’s crust.

There are many different types of faults. A thrust fault, like the one that caused the earthquake Saturday, is a fault where one part of the earth is pushed up and over another section of the earth.

Living in an area between a rock (the Indian subcontinent) and a hard place (Eurasia) residents of the region have gotten used to earthquakes. A 2005 earthquake in neighboring Kashmir killed 75,000 people, and left millions homeless.

Those kinds of large earthquakes aren’t as common in Nepal. The USGS reports that in the past 100 years, only four earthquakes larger than a magnitude 6.0 on the Richter scale have occurred in the immediate area. The most recent was in 1988, a 6.9 temblor that killed 1500. The largest in that time frame was a magnitude 8 in 1934 that killed around 10,000, and nearly destroyed Katmandu. Both the 1988 and 1934 quakes occurred about 150 miles away from the epicenter of Saturday’s quake, which struck much closer to the capital.

But just because a large earthquake hadn’t occurred in Nepal recently didn’t mean that people weren’t worried about it. Safety experts worried for years about poor building codes near the presence of a fault, which could cause untold misery if ‘the big one’ hit, like it did on Saturday. Even a huge quake like this one doesn’t eliminate the possibility of another large quake in the future.

“Early calculations suggest that this magnitude 7.8 earthquake is probably not big enough to rupture all the way to the surface, so there is still likely to be more strain stored and we should probably expect another big earthquake to the west and south of this one in the coming decades,” Laurent Bollinger, a geologist who worked in the region told Kate Ravilious for Cosmos.