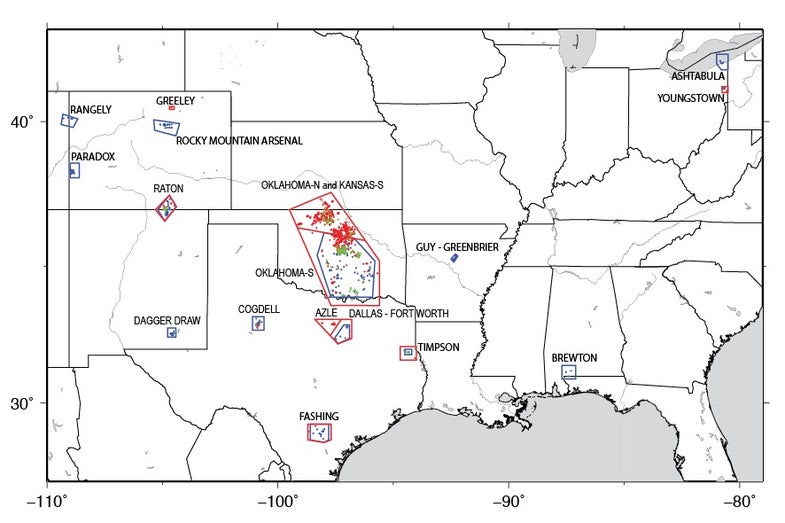 Just days after Oklahoma’s government embraced the idea that human actions could, in fact, cause earthquakes, the United States Geological Survey (USGS) released a report outlining how they could potentially provide earthquake mapping for people-induced earthquake hazards.

‘Induced’ or ‘potentially induced’ earthquakes (the terms are used interchangeably in the report) are earthquakes caused by human activities–typically the injection of wastewater from oil and gas drilling sites deep into the earth. The water can essentially lubricate faults, causing them to slip. Sudden movement along faults are what generate an earthquake.

The organization identified 17 sites that are at an increased risk of these induced earthquakes, including a large segment of Oklahoma. That state has experienced a dramatic increase in the number of tremors since 2009. In 2011, Oklahoma experienced a large quake that damaged numerous buildings and was eventually linked to wastewater injection wells.

This new earthquake mapping approach is a starting point for the USGS, which hopes to release a more detailed hazard model at the end of the year. Such guidelines could help predict the risk of an induced earthquake in communities across the United States, helping local and state governments plan for potential disasters.

“These earthquakes are occurring at a higher rate than ever before and pose a much greater risk to people living nearby,” said Mark Petersen, Chief of the USGS National Seismic Hazard Modeling Project. “The USGS is developing methods that overcome the challenges in assessing seismic hazards in these regions in order to support decisions that help keep communities safe from ground shaking.”