Biomimicry takes to the air 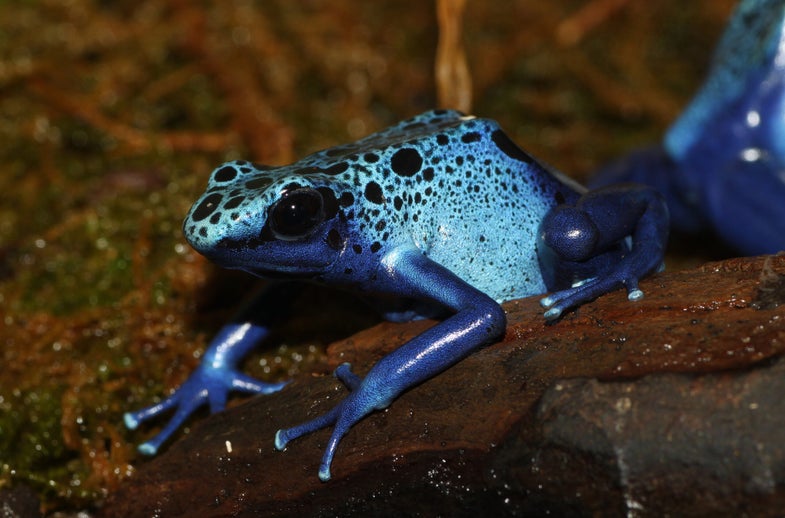 Konrad Rykaczewski, an assistant professor of engineering at Arizona State University, has strived for years to develop a better anti-icing solution for airplanes. His drive is more than academic: He was once stranded for two days in London when a long snowfall depleted Heathrow Airport of the supplies of antifreeze it uses to keep ice off airplane wings.

Rykaczewski’s eureka moment came later on a Panama vacation, sparked by a chance encounter with a poison dart frog. The frog’s skin inspired him to design a novel anti-icing coating. He learned that poison dart frogs have various glands in their skin. Some glands always secrete lubricant, while others secrete bits of toxin when provoked.

“That was exactly what I wanted from an anti-icing surface,” says Rykaczewski. He imagined a plane’s surface mimicking a frog’s skin, releasing antifreeze only when needed. To create the coating for such a surface, Rykaczewski’s team took a porous superhydrophobic layer and added a porous superhydrophilic layer underneath. The bottom layer rapidly wicks-in and stores antifreeze, while the top one prevents antifreeze from leaking into the environment.

Now in a prototype phase, this new coating delays icing by up to 10 times and uses 2-8 times less antifreeze, Rykaczewski reported in the journal Advanced Materials Interfaces. This may not sound revolutionary, but it’s actually a huge development in aviation safety. Ice building on the leading edge of a plane’s wings “changes the shape of the wings, affects the aerodynamics, and cuts the lift,” says Rykaczewski. “The plane essentially stops flying.” In worst-case scenarios, it can crash an aircraft.

Ice buildup can change the shape of a plane’s wings.

The National Transportation Safety Board reports that between 1982 and 2000, icing of airplane surfaces has caused almost 600 aviation accidents and more than 800 deaths in the United States. Furthermore, the new coating “shouldn’t be any more expensive than what’s being used now,” says Rykaczewski. The team created the superhydrophobic layer with sprays similar to those “selling for $40 in a hardware store.” It will also help preserve the concrete runways that currently get damaged when commercial planes are jet-sprayed with solution, saving airports money. The focus now is to optimize the coating’s design, improve its performance, and make it apply like paint. “We have a pretty good idea that works relatively well,” Rykaczewski says, “but it needs to be optimized, made durable, and scaled up.”

Rykaczewski envisions that industrial applications would start with protecting drones that navigate cold frontiers like the Arctic regions. “Then slowly, we can move on to smaller manned planes and then larger planes.”