The animals are fleeing the sea 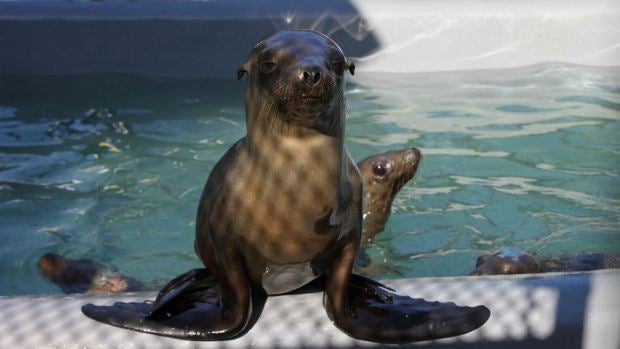 Rubbish is one of thousands of sea lions stranded along the California coast this year. Marine Mammal Center
SHARE

An adorable sea lion named “Rubbish” decided to ditch the ocean and tour San Francisco on flipper this morning. Someone spotted him in the Marina District around 7 a.m. and called it in. Laura Sherr, a spokeswoman for the Marine Mammal Center in Sausalito, said the little guy was taken to the center for care after being captured.

Marine mammal rescuers are worried that this could become more common as global warming heats up the Pacific Ocean. According to a study by the National Oceanic and Atmospheric Administration, this confused sea lion is one of at least 1,800 California sea lion pups that have been stranded along the coast this year. This is likely due to the drastic increases in the ocean’s temperature as well as a shrinking supply of food.

“In the first four months of 2015, we have rescued more animals than we rescued during the entirety of 2014,” said the center’s chief veterinarian Dr. Shawn Johnson. “What’s scary is that we don’t know when this will end. This could be the new normal–a changed environment that we’re dealing with now.”

Johnson said this wasn’t Rubbish’s first visit to the center, as they had cared for him in February. He had been rescued by the Santa Barbara Marine Mammal Center and then brought to the Marine Mammal Center, where they cared for the then-8-month-old pup–Poor Rubbish was only 30 pounds, and he had pneumonia and was malnourished. When he had gained 17 pounds and was healthy again, he was released at Point Reyes National Seashore on March 23.

Johnson says if the warming of our oceans continues, situations like these will persist. He named three primary stressors to the marine environment: overfishing, pollution, and global warming.

“We know everything is connected—a change in the winds is leading to thousands of sea lions stranding on the beach,” he said. “It’s all the more reason we should be paying close attention to the fate of sea lions, a top predator in the ocean.”