Ballooning behavior might not just be about catching the breeze. 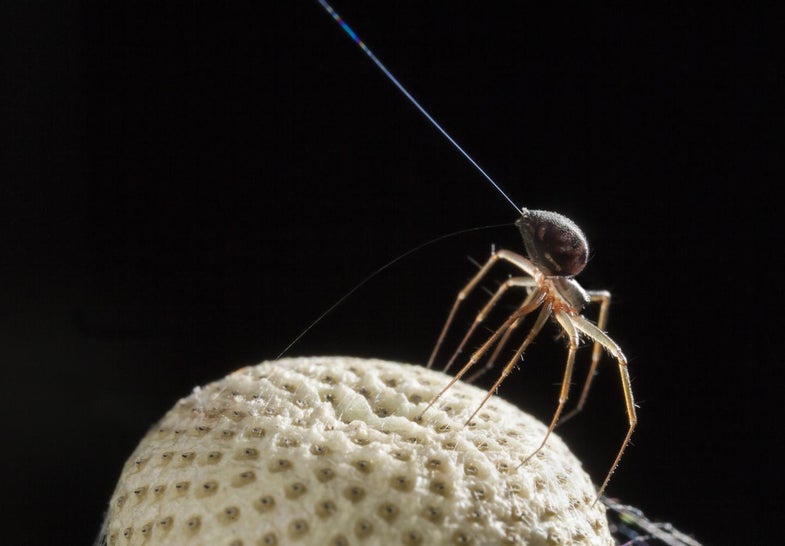 Spiders: it shouldn’t be surprising that a creature with four times our number of legs and eyes sees the world a little differently. But as research is starting to reveal, arachnids can even perceive forces we can’t. A new study from researchers at the University of Bristol reveals that spiders are sensitive to electrical fields like those all around us in the earth’s atmosphere. That atmospheric electric circuit is what causes weather like thunderstorms, and the researchers argue that when conditions are right, it also might prompt spiders to take flight, “ballooning” on strands of web.

Previous theories, which date back to at least the early 1800s, held that spiders ballooned in the presence of appropriately strong winds to flit from place to place. But this was an incomplete explanation, the University of Bristol researchers argue. Although ballooning in spiders has been correlated to windy weather, biologist Erica Morley and her colleague Daniel Robert set out to examine a different possible cause: electrostatic forces.

Spiders tend to balloon at low wind speeds, and many spiders balloon on fans of silk strands that don’t seem to get tangled up in the air. Based on 2013 research that showed it should be technically possible for electricity in the air to influence ballooning, Morley and Roberts hypothesized that the atmospheric potential gradient, or APG (basically, how electrically charged the atmosphere is at different heights, which is variable) might be the missing piece of the puzzle.

“I found that when there’s an electric field the spiders just start to balloon,” says Morley. In a laboratory that was blocked off from outside electric fields, she exposed spiders to low-grade electrical fields equivalent to what they might experience under the APG, in conditions where they might otherwise balloon. They found that the electrical fields could be detected by tiny hairs on the spiders’ legs and did provoke behaviors normally associated with ballooning.

Our understanding of spider ballooning is still incomplete, says arachnologist Michael Draney of the University of Wisconsin Green Bay. Draney studies the class of spiders that Morley experimented on. That class, commonly known as sheet web spiders, has the second-largest number of species within it of any class of spiders. The reason for this diversity might be related to ballooning, he says—the sheet web spiders are one of the few classes that remain small enough to balloon throughout their lifecycle, not just as hatchlings.

Remember the part in Charlotte’s Web where all of Charlotte’s children hatch and fly away from the farm where she lived with Wilbur the pig? This “spiderling” behavior is the most common reason for ballooning, entomologist Richard Bradley told Scientific American.

“It’s something that usually occurs maybe once in a spider’s lifetime,” Draney says. And it’s important, because the ability to balloon, sometimes going great distances, has allowed spiders, particularly the sheet web spiders, to reach almost every corner of the Earth. Recent research has shown they eat 400-800 billion tons of insects every year. “Their abundance means they’re ecologically important,” he says.

Draney isn’t yet convinced of a causal relationship between ballooning and APG in the real world. But he is impressed by the finding that spiders are sensitive to electrical fields. If that sensitivity is there, he says, “it’s probably not just ballooning.” APG could affect many aspects of how spiders move through the world. “It would really change the way we think about spiders,” he says, speculating that it might be particularly important for those who study spider behavior.

Besides advancing a line of scientific inquiry that stretches back to Darwin’s days, this research provides further evidence that insects may have evolved to be sensitive to electric fields in ways that influence their lives and behaviors. Morley was involved with parallel research that showed honey bees rely on electric fields to find pollen.

This field of research is only now emerging, says Morley. Her lab at the University of Bristol is on the cutting edge of it. An older field of study about how animals interact with electric fields looks at how birds like pigeons rely on the electromagnetic fields surrounding Earth to help them navigate.

Neuroscientist David Dickman, who has studied this phenomena in homing pigeons, says the bigger takeaway from this new research is that how animals of all sizes interact with electric fields merits study. “There are many, many forces in physics and science that we do not understand how animals use,” says Dickman. This new research “is another indication that animals adapt to their environment in ways beyond what people, scientists or otherwise, think,” he says.