Dogs spread across the Americas alongside humans. Then they got eaten. 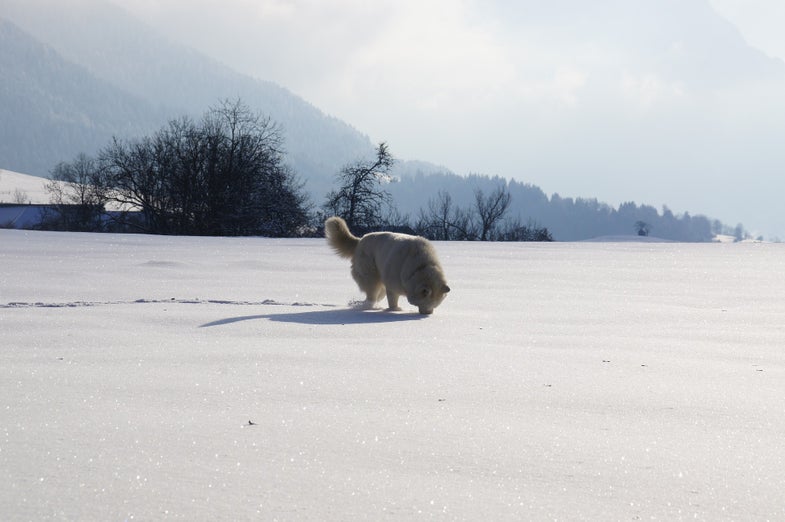 When people ventured across the land bridge connecting Siberia to North America, dogs trotted by their sides. Canines and their human companions spread throughout the continent for thousands of years, settling from California to Nova Scotia and down to Peru. These dogs ranged from the size of squat bull-terriers to hulking malamutes. By all accounts, these early American hounds were thriving. That was, until the arrival of European colonists, when the continent of dogs was snuffed out, leaving hardly a genetic trace, according to research published last week in Science.

“The dog story is reflecting the human story,” says Keith Dobney, an archaeologist who studies animal domestication at the University of Liverpool and is one of the study’s collaborators.

When Europeans brought over new diseases and persecuted millions of indigenous people living in the Americas, dogs in the New World suffered too. “It looks like we had a complete replacement of the original dog populations,” says Dobney. “And they disappeared very quickly.”

That destruction was no small feat. No one knows when the first dogs arrived on American soil, but they came over with the early migrants who journeyed into the Americas as early as 16,000 years ago, according to Laurent Frantz, an evolutionary geneticist at Queen Mary University of London and one of the study’s authors. “Maybe dogs facilitated that whole process,” he says.

Those early dogs might have lugged supplies, acted as hunting partners, alarm systems, and bed-warmers, as well as provided a source of food and fur when things got rough, says Angela Perri, an archeologist at Durham University who worked on the research.

Early migrants also found a companion in their dogs. “These are groups of people moving into completely novel, new environments that no one has ever been in before,” Perri says. “If I am going into a new place, I certainly want my dog with me.”

The earliest remains of dogs in North America show this special relationship. The bones lay in their own graves, near the western edge of Illinois, dating back to nearly 10,000 years ago. “When a dog dies, you don’t throw it in the trash. You are specifically making a pit and burying it there,” Perri says. The site is the first evidence of individual dog burials anywhere in the world.

The skeletons don’t reveal much about these dogs beyond their size. Perri suspects the pups looked like large, lightly-built terriers. Their slight frame may be the legacy of coyote ancestry, she says. “If you have free-ranging dogs running around all over the place, there wouldn’t be any reason why they wouldn’t be interbreeding.”

Later evidence of dogs is scattered throughout the Americas. “They were really everywhere in the northern part of the continent,” says Frantz, the geneticist. “They were clearly useful and important to many of these cultures before Europeans arrived.”

As Europeans spread disease and ravaged Native American communities, they also killed the dogs they came upon, often gobbling up their victims, according to Perri. “The Spanish ate their way through dog populations all up and down North America.”

The destruction was near-total. When researchers looked for a genetic legacy from these original American dogs in animals alive today, they came up short. “You would assume that there would be a whole bunch of hybrids,” descendants from the mix of newcomer European dogs and original American dogs, says Dobney. “But it doesn’t look like they exist.”

“We have more Neanderthal in us than there are ancient dogs left in modern dogs,” Perri adds.

The closest genetic signature from these early dogs lives in a bizarre place— a transmissible cancer that infects dogs today. The disease spreads through tumors passed from one animal to the next, like a cold sore. But the tumors transfer cancerous cells themselves, not a virus. The cells contain pieces of ancient DNA from the original dog that spouted this weird cancer.

The early American dogs shared much of their genetic code with the original cancer dog, who likely lived in Siberia thousands of years ago. They made up a line of dogs genetically distinct from any alive today.

Many avid dog-owners today want to know if their dog is the descendant from an ancient American lineage. Perri says she gets the question all the time. “I have to tell them, ‘No it’s not.’ Then they’re sad.”