Hurricanes may have made these lizards better huggers 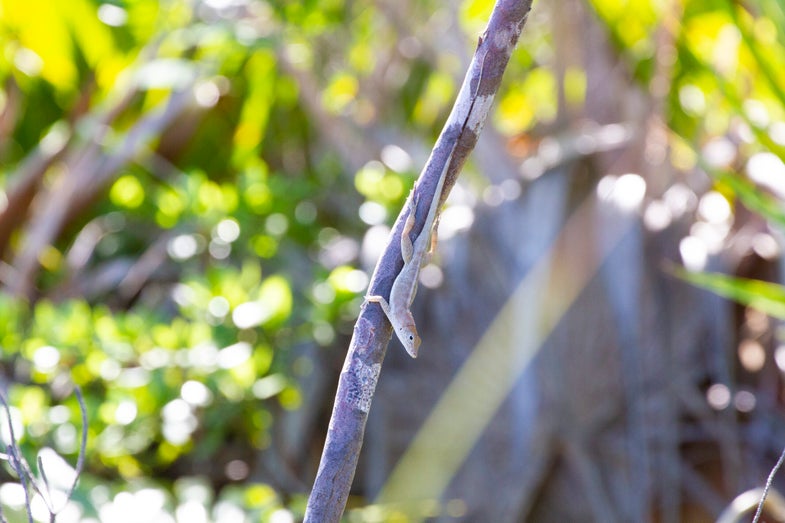 For one family of lizards, hurricanes may initiate a rapid natural selection process for certain traits. Colin Donihue
SHARE

Scientists usually think of natural selection as a slow process, unfolding over generations of incremental change. But, as a study published today in Nature suggests, sometimes this system can take a more rapid approach, especially after a sudden event like a hurricane. As these disasters become more frequent thanks to anthropogenic climate change, understanding how hurricanes affect the species who live in the places they make landfall is vital. This study, which was mainly the result of good timing, offers evidence that, for one family of lizards at least, hurricanes may initiate a rapid natural selection process for certain traits.

Just four days before Hurricane Irma reached the Turks and Caicos in 2017, ecologist Colin Donihue completed a survey of the local anole species (Anolis scriptus, a family of lizards) on two remote islands. He was studying the lizards’ physical characteristics ahead of a planned eradication effort on invasive black rats, and his team’s plan was to return a few years after the eradication to see if the lizards had changed. But just six weeks later, after first Hurricane Irma and then Hurricane Maria ravaged the islands, Donihue found himself back at Pine Cay and Water Cay, repeating his survey. This time, the goal was to see if there were shared physical traits among anoles who survived the hurricanes.

On both islands, walking the same routes as they did in the original study, Donihue’s team found that lizards with six to nine percent larger toe pads than average, short back legs, and long front legs were the ones who had been able to hold on. His team surveyed about 100 lizards.

Donihue and his coauthors believe this is evidence of natural selection–in other words, survival of the fittest, who then pass on their traits to their offspring. “It makes sense, especially because we saw the same pattern occur on both islands,” says Donihue. However, because the experiment was originally designed to study change over a few years in different circumstances, they can’t definitively rule out other possible explanations for the change, such as big-toed lizards being blown onto the islands from elsewhere.

After gathering field data, the researchers conducted some lab experiments with anoles who survived the storm to see how they behaved in hurricane-force winds, resulting in one of the bizarrest videos ever to hit the internet (at the time of publication, the GIF of this lizard is already captivating animal lovers worldwide.) They observed that the anoles placed themselves on the side of their perch that was protected from the wind and just hung on with their forelegs.

AGAINST THE WIND: How do lizards survive hurricanes? Harvard scientists dialed up a leaf blower to find out (no lizards were harmed) & the video is fascinating. https://t.co/ykK8cK9cbZ// pic.twitter.com/4adxH5NTXv

If natural selection is occurring, it’s likely that a genetic shift in the lizards would be observable within a single generation, says anole evolutionary biologist Martha Muñoz. Muñoz, who was not involved with the research, says the study is in an “elite club” of scientific studies made possible by happenstance. It also offers further evidence for something that scientists have come to understand only in the past few decades, she says: “Evolution and natural selection is something you can observe in the wild in a very short span of time.”

Hurricanes as a cause of natural selection would also explain some other observations that researchers studying anoles have noticed over the past half-century. There are more than 400 species of anoles living in Central and South America as well as the Caribbean Islands and they are widely studied. “There’s been a long-standing mystery in anole biology about why the island fauna have such overbuilt toe pads relative to very similar species living on the mainland,” says Donihue. “This hurricane result kind of gives us an inkling at a potential explanation to this decades-long mystery.”

That result points to a possible wider pattern for islands that are intermittently visited by hurricanes: It’s possible that these sporadic events have helped to shape the animals that live on these islands over generations, via natural selection. “This idea of connecting the dots between this microevolutionary events, these little natural selection moments, to much larger macroevolutionary patterns, is really an open question,” says Donihue. Further, says Donihue’s co-author, Jonathan Losos: the study “suggests there’s another aspect to evolution that we don’t understand.” This is the first study to show that hurricanes have the potential to drive natural selection within a species rather than just wipe out members of the species indiscriminately, he says.

A next step will be figuring out how to study such events on purpose, rather than by accident as happened in this case. To conclusively show that natural selection is occurring and lizards with a certain body type are surviving at a higher rate, individual lizards will need to be tagged and studied before and after a hurricane, he says. Given the difficulty of predicting the paths and occurrences of hurricanes, that will take some work, and perhaps another bit of luck, but this study shows it might be worth the effort.