It would take 50 billion bees to light an LED light, but the insects can still generate quite a buzz. 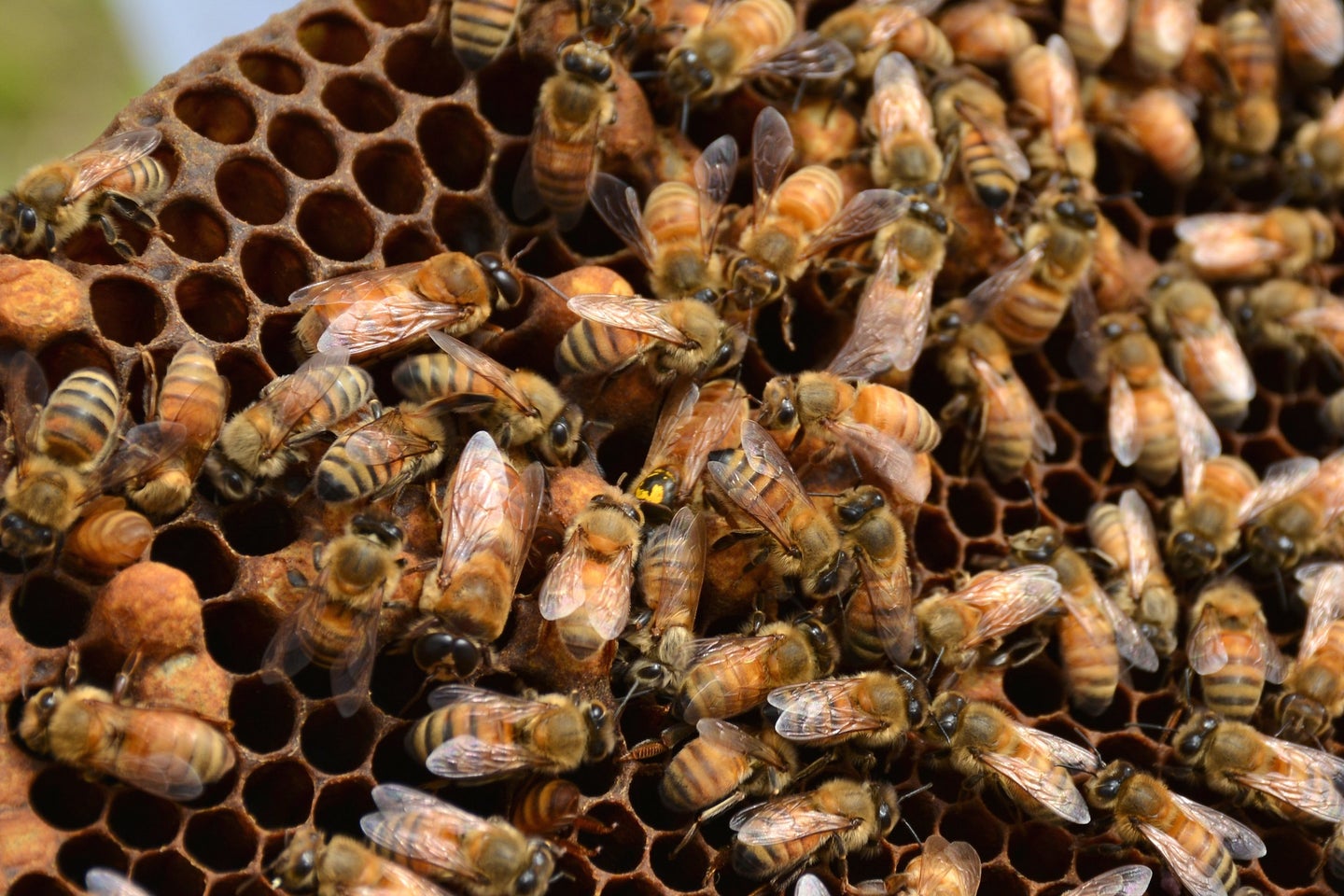 Bees could be powerful in a way invisible to the naked eye. Marisa Lubeck, USGS
SHARE

Weather radar has been known to pick swarms of grasshoppers, dragonflies, and possibly cicadas as they take to the sky. While these big brigades of bugs aren’t generating their own rain showers or thunderstorms, the organisms carry with them a very small electrical charge that could impact electricity in the atmosphere as they fly. But just how much of a charge can the buzzing of the bees create?

The short answer is a lot. A team of scientists in the United Kingdom measured the electrical fields near swarming honeybees and found that the insects can produce as much atmospheric electric charge as a thunderstorm cloud. Their research was published today in the journal iScience and demonstrates how this type of electricity can shape weather events, help insects find food, and even lift spiders up in the air when they migrate.

[Related: When insects got wings, evolution really took off.]

“We study how different organisms use the static electric fields that are virtually everywhere in the environment,” study first author Ellard Hunting, a biologist at the University of Bristol, says in an email to Popular Science. “For instance, flowers have an electric field and bees can sense these fields. And these electric fields of flowers can change when it has been visited by a bee, and other bees can use that information to see whether a flower has been visited. Or trees create an increased electric field in the atmosphere, and spiders can use this electric field to take off, and balloon, allowing them to migrate over large distances.”

The team found that honeybee hive swarms change the atmospheric electricity by 100 to 1,000 volts per meter, which increases the electric field force that is normally experienced at ground level rather than in the air. They then developed a a model that can predict the electrical influence of other species of insects. When comparing thunderstorms and other weather events with the the bees’ highest charge, the authors found that a dense swarm of bees had a higher electric charge. The bees had a charge density that was about eight times greater a thunderstorm cloud and six times greater than an electrified dust storm.

“How insect swarms influence atmospheric electricity depends on their density and size,” co-author Liam O’Reilly, also a biologist at the University of Bristol, said in a press release. “We also calculated the influence of locusts on atmospheric electricity, as locusts swarm on biblical scales, sizing 460 square miles with 80 million locusts in less than a square mile; their influence is likely much greater than honeybees.”

The bees most likely acquire their charge through the friction they face during flight. While it would take about 50 billion bees to light one LED light, they can actually increase the background atmospheric electric field two to 10 fold, which Hunting called a “big surprise. “This makes it the first report of biology as a source of biogenic space charge, which can be as relevant as physical phenomena such as clouds,” he tells PopSci.

The discovery of electrical fields happened shortly after Benjamin Franklin’s famous kite experiment, but scientists are still trying to unlock the secrets of electricity as it exists in nature.

“We only recently discovered that biology and static electric fields are intimately linked and that there are many unsuspected links that can exist over different spatial scales, ranging from microbes in the soil and plant-pollinator interactions to insect swarms and the global electric circuit,” says Hunting. “This makes it an exciting new area of empirical research. The true implications of this remain speculative, and whether these dynamics induced by insects affect weather is definitely worth investigating.”

According to Hunting, understanding electric charge in the atmosphere can answer questions in fields beyond physics, including how and why dust particles can be found thousands of miles away from the Sahara Desert. “The true implications of this remain speculative, and whether these dynamics induced by insects affect weather is definitely worth investigating,” said Hunting.