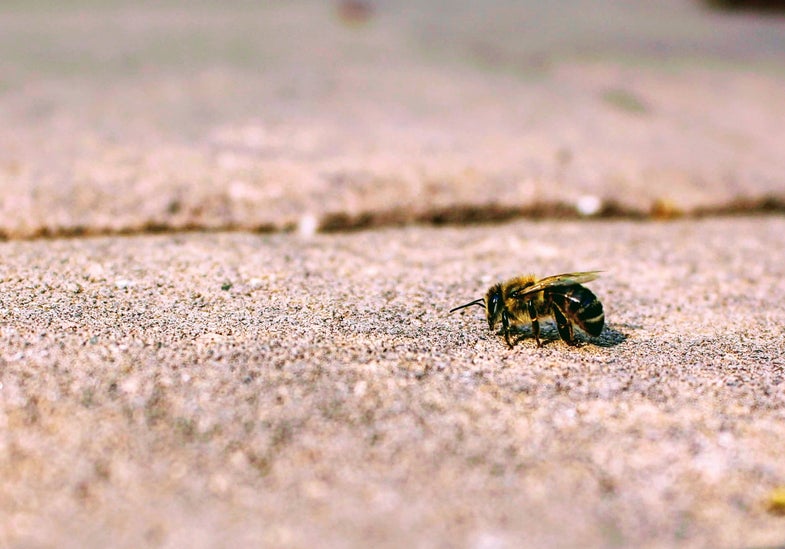 You might associate honeybees and bumblebees with their cute, fuzzy shape and seemingly aimless interest in flowers. But beneath the yellow-and-black (mostly) stripes lies an incredible mind. A new study pooled evidence from 23 studies of honeybees and bumblebees: its conclusions, which build on years of bee research, point to the fact that levels of pesticides currently considered safe to use may still have a big effect on bee colony survival.

Although they might look simple, “bees have a very difficult job,” says study author Harry Siviter, a graduate student at Royal Holloway University of London. To efficiently find and collect food to bring back to the hive, worker bees have to quickly learn to recognize (and then memorize) the most effective foraging routes, he says. To top it off, the routes change with the seasons and with other factors. Honey bees even remember which flowers they’ve visited recently, so they don’t waste time going there again.

All of this takes a good memory and an ability to learn—things that many lab studies have observed in honey bees using the “proboscis extension assay.” When a bee comes near the scent of sugary, delicious nectar, it starts to stick its tongue out. In experiments, researchers exposed bees to pesticides and then watched what they did when prompted to forage, looking to see when—and whether—they stuck their tongues out. Siviter and his colleagues took the data of 23 of these studies and performed a large-scale analysis of the results.

They found that doses of pesticides that are the equivalent of what a bee might encounter in a field “had significant negative effects on learning and memory.” That was true both when bees were suddenly exposed to a lot of pesticide, and when they got a little bit over a long time. It was also true regardless of whether the bees were exposed to neonicotinoids, a class of pesticides that has been around since the 1990s and is being increasingly regulated today, or other pesticides.

Current pesticide regulations are geared toward making sure they aren’t used at levels that kill bees. But these currently legal amounts apparently make the worker bees dumber, which could have effects for species survival. “Regulation and policy should move toward addressing the sub-lethal effects of pesticides,” Siviter says.

The other question these findings implicitly raise is how these pesticides affect less-studied types of bee. Bees don’t all live collectively, University of Guelph scientist Elizabeth Bates told Popular Science in an interview. “Many wild bees do not live in colonies,” she says, “and if their learning or memory are affected, there are no other bees to help out or pick up the slack.”

At the end of the day, Ohio State University entomologist Reed Johnson told Popular Science in an email interview, the question is: “Can pesticides ever be used safely around bees?” This study, which in one sense has the strength of 23 studies’ worth of evidence, “suggests that the answer is ‘no,'” he wrote.

The follow-up question goes deep into one of our most fundamental needs—food. Pesticides are an essential part of large-scale industrial agriculture, and some amount of honeybee exposure is inevitable. The question, then—which hasn’t been answered by regulation to date, Johnson says—is how much harm to bees is acceptable.

As ever, more research is needed. But this study is worth paying attention to, University of Ottawa bee conservationist Jeremy Kerr told Popular Science. Its conclusions are based on evidence from over 100 individual experiments included in the 23 studies, he says, lending their findings weight. “The lesson that emerges is that honeybees begin to lose their ability to learn and to remember when they are exposed to neonicotinoids,” he writes.

The power of this paper is that it shows “a consensus of knowledge” on this question, he wrote. That result is something pesticide policy-makers could pay attention to. “With restrictions on neonicotinoids increasing globally, many will be looking to alternative chemicals for crop protection,” Bates says. It’s important to think about what those chemicals might be doing to the bees.