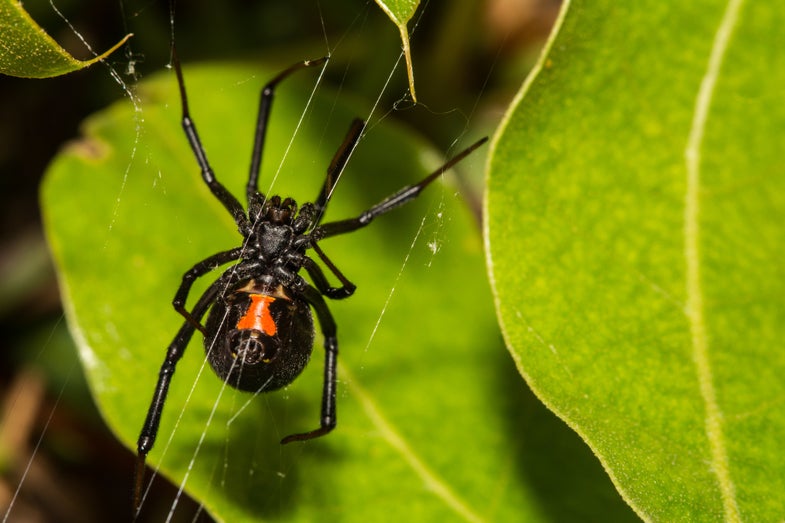 It appears that spiders beat us to the age of nanomaterials by about 300 million years, spinning nanoparticles into strong yet stretchy threads far beyond our modern manufacturing capabilities. But now we’re trying to catch up, studying their secrets using advanced technology of our own.

Spider silk starts off as a soupy mixture somewhere between a liquid and a gel, which the arachnids squeeze out into super-tough threads thanks to a complex recipe of pressure, acidity, and additional chemicals. Researchers know what goes into the liquid and what the finished product looks like, but gaps remain in their understanding of how spiders manufacture one of the strongest materials in nature at room temperature and without any fancy machinery.

Using a super-cooled electron microscope, a motley team of biochemists and materials scientists has delved deeper into the black widow’s silk glands than ever before. Their work, which appeared Monday in the Proceedings of the National Academy of Sciences, confirms that the spider’s proteins gather into nano-scale balls, and for the first time reveals the flake-like structures inside those balls. The researchers hope their contribution will help those trying to churn out spider silk the way we currently mass produce nylon. “The practical applications for a material like this are essentially limitless,” Nathan Gianneschi, a nanomaterials chemist at Northwestern University and one of the team’s leaders, said in a press release.

One issue for would-be silk weavers is that no one knows exactly what the “spidroin” proteins do inside in the spider’s silk glands as they go from molecules to threads. Researchers had assumed for more than a decade that the strands would roll themselves up into spheres known as “micelles,” because they have parts that are attracted to water and other parts that repel water. But there was little direct evidence of the theory, and no one knew what specific form the micelles would take.

The first concrete proof that spidroins were indeed linking up came from San Diego State University biochemist Gregory Holland. Based on how they moved through liquids in various circumstances, he concluded that the particles measured a few hundred billionths of a meter across—too big to be solitary proteins. Holland felt those results were promising, but it wasn’t until he ran into Gianneschi at a conference that he realized they could go farther. “Nathan got to talking and I said, ‘God, if we could just get the images of what they look like,'” Holland recalls.

Gianneschi specializes in cryo-transmission electron microscopes—devices that create images of objects too small for optical microscopes by firing electrons through a thin sample at extremely cold temperatures. Others had tried this on spider fluid before, they learned, but no one had found a way to prepare the sample without ruining the delicate protein structures. “If you breathe on it, it starts changing,” Holland says. “Stick a needle in and you can pull a fiber right out.”

The forces of normal pipette techniques collapse the spidroins into thread fibers, so the team painstakingly dissected black widow spiders and prepared drops of silk fluid slowly and gently, using various custom-made tools. Eventually, they managed to secure samples that, as far as they can tell, preserved the natural structure of the molecules.

The team then reconstructed layer-by-layer images of the samples to take the first peek at what the bundles of silk proteins really look like. Far from simple spheres, they found the micelles were packed with hundreds of smaller bundles, which Gianneschi describes as “flakes” or “disks,” each its own tangle of spidroin fibers. When properly pressurized, the researchers suspect these flakes stretch out into the fibers that go on to become a silk strand. They hope this new model will eventually let those trying to cook up synthetic spider silk troubleshoot their recipes, checking that their spidroins are tangling up in the desired ways.

Anna Rising and Jan Johansson of the Swedish University of Agricultural Sciences, Uppsala, Sweden are two such researchers, heading up an international team that described the strongest synthetic silk yet early last year. They praised the new study for expanding the basic theory of silk proteins, but pointed out that many details are still missing. “Ideally one would like a picture of how the spidroins are arranged at atomic resolution,” they wrote in an email. Previous research has studied the ends of the protein, but the intermediate chain remains uncharted.

They also said that cryo-electron microscopy will be a valuable tool for filling in some of these blank spots on the silk-protein map, a result that has Gianneschi and Holland excited too. The black widow’s silk is some of the strongest in the arachnid class, and they plan to look at other species to see if their various types of silk match up with different shapes of protein bundles.

“Now that you know how to look,” Gianneschi says, “you can go look.”