Relatively little research has been done in the country's waters. 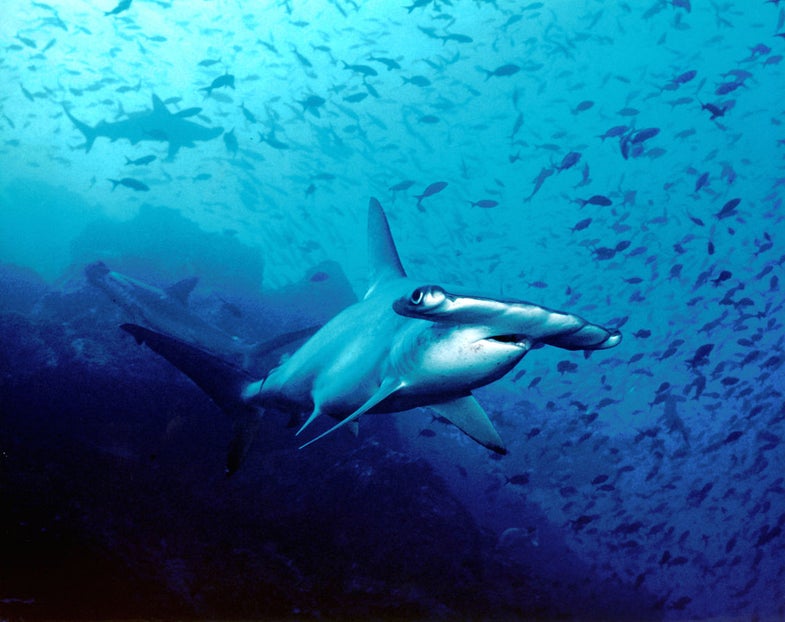 Fidel Castro was known for his love of scuba diving, so much so that the CIA once schemed a potential (though never carried through) plan to hide a bomb near his favorite dive spot, a chain of islands off the southern coast of Cuba. Decades later, in 1996, Castro named the place a marine sanctuary, known as Jardines de la Reina or Gardens of the Queen. Only a few hundred miles from Miami, the reserve is home to one of the most pristine reefs in the Caribbean, and maybe the world.

“I’ve never dived in such a healthy system in my life,” says Tristan Guttridge, a behavioral ecologist and previous director of the Bimini Shark Lab in the Bahamas. “Every dive was just mind-blowing,” he says. Guttridge visited the sanctuary this spring in search of great hammerheads—in particular, animals of a certain imposing size. The Discovery Channel documented his trip to kick off Shark Week on Monday.

Everything about the Gardens of the Queen is big. The reef itself extends over 60 miles along the coast, crocodiles as long as minivans wade through its mangrove forests, gaping-mouthed fish called goliath groupers weigh in at over 600 pounds, and then, there are the sharks. The sanctuary is home to silky sharks, Caribbean reef sharks, nurse sharks, whale sharks, and others. Dive in its waters, and you’re guaranteed to see hoards.

“Cuba has a lot of myths and legends about big sharks,” says Melissa Marquez, a marine biologist and founder of Fins United Initiative who joined Guttridge on the trip. A lore surrounds a certain shark in the sanctuary, known as “the Queen,” likely not one but a group of monster-sized great hammerheads that haunt the reef, Marquez says.

We don’t know much about great hammerheads at all, beyond their tendency to migrate hundreds of miles all over the world and their love of snacking on stingrays. During surveys, biologists often clump the species with their hammerhead cousins, so population estimates are generally not reliable, Guttridge says. He and Marquez visited Cuba’s sanctuary as an exploratory trip to see if they could find any great hammerheads and document the reef’s condition. They want to go back to tag individual animals and collaborate on research with Cuban scientists.

As of now, no one knows how many great hammerheads use Cuba’s reefs as a pit stop on their migrations, or where the animals head off to in the summer. “The waters around Cuba have been relatively untapped outside of Cuban locals and fisherman,” Marquez says.

On their last dive in the sanctuary, Marquez and Guttridge managed to take a snapshot of a great hammerhead. The animal measured 13 feet across, big for sure, but certainly not close to the largest great hammerheads ever seen.

More impressive than the one hammerhead is the sheer number of sharks of all species teeming in the waters. The presence of sharks indicates a thriving reef, and the Gardens of the Queen is no exception. Sharks are 10 times more likely to be found inside the reserve and many fish species are more than twice as numerous within the sanctuary than outside its boundaries. The Cuban government permits less than a thousand divers to enter the area each year and limits fishing to a number of lobstermen on the preserve’s outskirts. The reefs are a source of national pride.

“That’s what all coral reefs around the world should look like,” Marquez says. “It’s going to be hard diving elsewhere now.”