An interactive chart shows the journeys of open-ocean sharks, and where they could run into trouble. 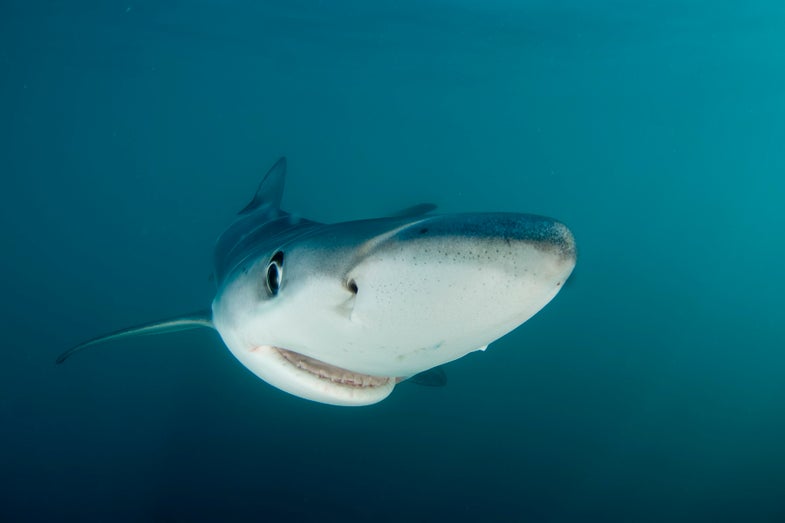 In the middle of the ocean, sharks’ wanderings are bound to cross paths with commercial fishing boats—after all, we are both looking for the same tasty morsels. And now, you can watch the action unfold. Oceana, an ocean advocacy group, released an interactive map this week which tracked 45 ocean-faring sharks and showed how often they overlap with human fishing activity in the Atlantic Ocean.

Over a period of six years, marine biologists along the east coast of the U.S., from Miami to Wood’s Hole, caught and tagged open-ocean shark species under threat, including blue sharks, shortfin makos, hammerheads, and tiger sharks—many of which are not afforded any protections like fishing restrictions.

“It’s a tough ocean out there for those species,” says Austin Gallagher, a marine biologist at Beneath the Waves, and one of the lead researchers on the project. “Being an open-ocean shark, you have to investigate anything that shows up when you’re swimming around. And many times, there’s a hook attached to it.”

Biologists have been placing satellite tags on sharks for more than a decade, but no researchers have used that data to overlay the animals’ activity with that of large fishing vessels on a large enough scale to truly see any patterns.

The data they’ve found have confirmed what researchers already knew about the dangers to sharks imposed by large fishing vessels: outside the protection of coastal waters, sharks are at great risk. But conservationists say that tools like the interactive map will get more people concerned about the welfare of sharks. This new data could also help researchers better assess where sharks are likely to run into trouble, Gallagher explains.

So far, Gallagher and other biologists have tagged 45 sharks. He says he plans to tag more, though finding, capturing, and safely releasing the sharks back into the open ocean is no small feat.

“There’s a lot of long hours sitting on a boat, rocking side to side waiting for sharks,” Gallagher says. “It can be quite grueling, to be honest.”

The work can be just as dangerous as it is tedious. Although the animals he’s catching aren’t interested in taking a bite out of people, Gallagher still has to deal with a huge, unhappy fish. “Having a big, thrashing mako shark on the side of the boat is something you definitely need to prepare for.”

Once Gallagher catches a shark and deems it healthy enough, he bolts a GPS tag to its fin. If all goes well, every time the sharks’ fin breaches the water’s surface, the device will ping a satellite overhead, relaying its location for up to two years.

These monitors only show the minimum distance a shark may have traveled, says Stephen Cain, the assistant director of the shark research lab at the University of Miami, another group that collaborated on the mapping project. “It could have been doing pirouettes out there for all we know,” he says.

As the sharks move around, researchers keep careful tabs on their movements. “These are like our kids,” Gallagher says. “We want them to do well. We want them to transmit.”

But not everything is a smooth ride. Sometimes transmissions from a shark prematurely go blank, a likely sign the animal has been caught by fishermen. Certain species are especially under threat from incidental capture or direct targeting. “Blue sharks and makos are getting absolutely crushed,” Gallagher says. “Blue sharks are probably the most exploited large animal on the planet over 50 pounds,” he says.

Cain is hopeful tools like the map will help increase public engagement. “We’ve seen successes in the international community when it came to whaling,” he says. “That was done with public will and power.”

But Gallagher wouldn’t take his chances. “I would not want to be reincarnated as a blue shark,” he says.