Tropical frogs were alive 99 million years ago, and we have the amber to prove it 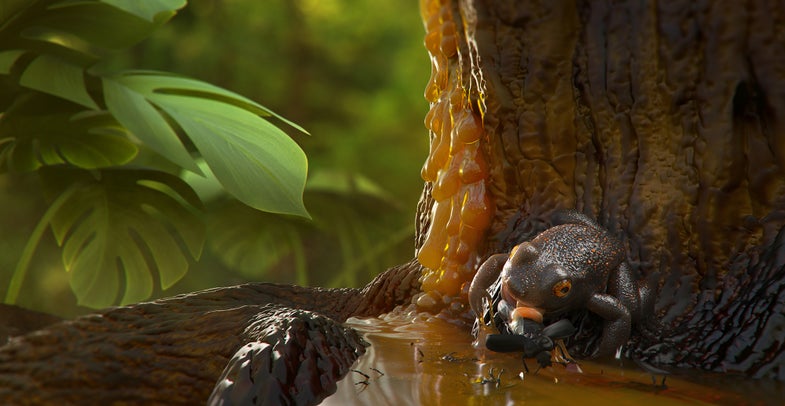 When it comes to fossilization, amber is the miracle material you’re dying to get submerged in. The sticky sap that dries up and lasts for millennia has gifted us the discovery of a new species of flower, a carnivorous plant, dinosaur feathers, a lizard, and even an ancient baby bird—and that’s just in recent years. You can even lick it in the name of science. Amber has now done it again, according to a new paper published in Scientific Reports on Thursday, preserving the oldest rainforest frogs ever found.

Meet Electrorana limoae, a newly-discovered species of tropical frog alive during the Cretaceous period. The findings stem from an analysis of four 99-million-year-old amber specimens originally excavated in northern Myanmar. “Preservation of vertebrates in amber is generally uncommon,” says David Blackburn, the associate curator of herpetology at the Florida Museum of Natural History and a co-author of the new study. “Our comparisons of the skeleton of these new frog fossils indicate that these amber-preserved frogs were ‘true frogs,’ and may represent one of the most ancient lineages seen today.”

Frogs have been bouncing around on Earth for nearly 200 million years now, and more than a third of the nearly 7,000 species on record live in wet tropical rainforests. But the frog fossil record has always been fraught with holes. Frogs are relatively small and scrawny creatures, and they don’t hold up very well over the millenia. That’s part of the reason the new amber fossils are such an exciting find—they go quite a bit of ways in helping scientists not just better characterize the frog species of the ancient past, but also understand more of the ecological makeup and biodiversity of wet tropical rainforests hundreds of millions of years ago.

“There are not very many amber animal fossils that are known, and even rarer for frogs,” says Chris Raxworthy, a curator in the American Museum of Natural History’s Department of Herpetology. “You can imagine a frog dying in a tropical rain forest would be eaten or decompose in within a day. Whenever you get fossils like this that turn up in amber, relatively intact, it’s very exciting. It’s almost impossible.”

The fossils were found in the Kachin State of Myanmar. According to Blackburn, from what we already know from other amber deposits in the area (such as mosses, bamboo-like plants, aqua spiders, and other lifeforms), that ancient ecosystem largely resembled the type of tropical frosts we have today. Lida Xing from the China University of Geosciences in Beijing found the four amber pieces while searching for vertebrate fossils. After polishing the pieces, he identified several specimens within them that seemed to contain parts of a frog. One of the pieces of amber even possessed a preserved beetle, which may have been the frog’s next meal had the two creatures not been deluged by tree sap first.

Blackburn and his team were then able to run CT-scans to create a digital model of the contents within the amber, leading to a 3D visualization of the Electrorana skeleton. “It’s an amazing way to use imaging technology to basically pull the fossil out of the amber,” says Raxworthy. “It’s easy to imagine they could even 3D print it. I think that’s really cool. You couldn’t have done this 10 years ago.”

Through the skeleton, a juvenile, the researchers found the presence of ribs and bones in the cartilaginous plate that supports the tongue, which suggests a link to some current species, such as fire-bellied toads and midwife toads. The genus name Electrorana is a reference to the amber (in Latin, electrum means amber and rana means frog). The species name, limoae, is in honor of the study’s benefactor, Mo Li, who purchased the specimens and provided them for study.

Moreover, the findings “really establish that frogs of this period were living in humid forests,” says Raxworthy. “That’s something we could have predicted, but we never had any hard evidence for before. It’s nice to get confirmation here.”

Blackburn and his colleagues at the Florida Museum of Natural History are moving forward in developing a large digital library of frog skeletons from around the world, to better inform scientists on comparisons made between extinct and living frogs. The new species should be a perfect addition to that database.