The move could defend the grid against hurricanes. But it brings its own problems—and price tag. 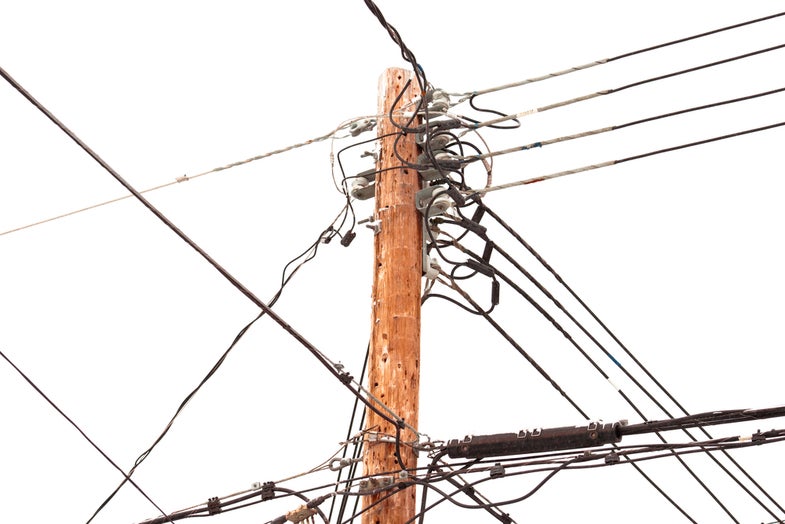 The first message transmitted through Samuel Morse’s newly-inaugurated telegraph line asked, “What hath God wrought?” Sent from Washington, D.C. to Baltimore, Maryland through a system of wires suspended above homes and trees on wooden poles, the 1844 dispatch was oddly fitting. Suspended telegraph wires were soon supplanted by Alexander Graham Bell’s telephone wires and supplemented by electricity wires connecting citizens to the growing grid. But they were not a universally popular choice. At first, people complained utility poles, as they would come to be called, were unreasonably ugly. Today, people claim they’re unreasonably risky.

Each year, hurricanes, snowstorms, and an assortment of other weather events destroy above-ground utility poles. Heavy snow and ice can snap wires. More commonly, ferocious winds topple utility poles themselves, or uproot neighboring trees, which drag nearby wires down with them.

The costs of the corresponding outages are immense. Numerous analyses show even a one hour power outage can cost commercial and industrial facilities tens of thousands of dollars—and outages often last much longer. In specialized industries like museums, a power outage can mean the difference between a safe, stable climate for art and an environment that starts to quickly degrade priceless artifacts. And as we’ve witnessed in the aftermath of Hurricane Maria in Puerto Rico, damaged grids can claim human lives.

That’s why many people argue for “undergrounding,” the process by which existing utility poles are moved from their current spot above the tree canopy to a protected tunnel below the earth. Proponents, who seem to grow more vocal over the summer as hurricane season picks up speed, say this move would ensure the grid’s resiliency, even in hurricane-prone places like south Florida. But Ted Kury, the director of energy studies at the University of Florida’s Public Utility Research Center, says not so fast. Undergrounding could reduce the number of hurricane-related outages in some places. But these buried lines bring with them their own problems—and price tag.

A costly process with no guarantees

There are two methods used to toss out poles and taking utility cables underground. The cheapest method is called open trenching, where utility companies dig into the earth, laying down the string of utility networks as they go and backfilling the trenches later. This often requires rerouting traffic and other significant (albeit short term) changes to the movement of a community.

Many municipalities opt instead for directional drilling. Adapted from an old oil and gas technique, directional drilling is a less invasive—but more expensive—option for undergrounding utilities. From a fixed point, installers can drive a pipe through a carefully-plotted, miles-long subterranean channel without disrupting street-level activities.

In either case, the wires hanging above aren’t ready for life underground without some modifications, the most important of which is insulation. Electricity wires are, by their nature, very warm, as they’re channeling currents to and fro. In the open air, this heat can dissipate, but deep in the soil it can’t. That’s why utilities wrapped their underground wires in plastic and surround them with a conduit like oil to keep things from overheating.

While that may sound simple—anyone with a backhoe could do it!—it’s not. Depending on the density of the local population and the terrain, undergrounding can cost billions of dollars. As Kury wrote in a piece for The Conversation last fall, many communities have factored out the expenses of undergrounding and decided that it wasn’t worth the price. In North Carolina, for example, the approximately 25-year-long process of undergrounding the entire state’s utilities would raise electricity prices by 125 percent. Most of the state’s power still hangs overhead. Even Washington, D.C., which has made the decision to underground a portion of its utility wires, is expected to cost $1 billion and raise rates.

That’s not the only cost, either. Repairing underground systems is often more expensive than repairing those suspended in the air. “When the power goes out, there are two obstacles that [utility] faces before they can fix the line,” Kury says. “One, identification of the fault, and then two, access to the line.” While smart grid technology is making identification easier—devices could tell the utility exactly where in the system a given disruption lies—access to underground systems is hindered. Repairs often require disruptive digging, which is only made more difficult by frozen soils in a blizzard or floodwaters that often follow hurricane-force winds.

Ultimately, neither system can protect power in every situation. During Hurricane Sandy, which slammed into the northeast in 2012, underground electrical equipment was flooded and aboveground utility poles were downed. “It’s nearly impossible to protect the electricity grid from damage,” Kury says.

Other advances in girding the grid

Communities that don’t want to fund big undergrounding projects do have other options to explore. In recent years, many cities have replaced the old wooden utility poles with frames made of durable metal. And tension ropes, called guy wires, can help to anchor poles to the earth. At the same time, Kury says vegetation management is crucial. Pruning, watering, and inoculating trees against pests can keep them healthy and better able to endure storms. At the same time, swiftly removing unstable trees could reduce the chance some venerable old oak destroys neighboring power lines when high winds uproot it.

Many utility companies also deploy drones in unique ways. Commercial drones like those from Yuneec can reduce the response time for customer calls. In some utility districts, data from drones is used to share the latest information with technicians and customers on everything from the height of utility lines to the functionality of neighborhood storm drains. And in a pinch, drones can aid in aerial reconnaissance at sites that have been rendered otherwise inaccessible by storms.

Smarter grid have also helped utilities get ahead of problems before they arise. In recent hurricanes, Kury says, Florida’s power providers selectively shut down substations at risk of flooding or other damage and reroute that energy. The hope is proactive decisions like these will allow power to be restored more quickly and reduce the potential for a single pain point to gum up service across the system.

Ultimately, some combination of these tactics can make a more resilient grid. But, Kury says, “there is no blanket policy that works for everybody.” Every city must make the decision that’s right for its residents, while acknowledging no system can function perfectly when it’s up against Mother Nature.