What is the “foreseeable future” anyway? 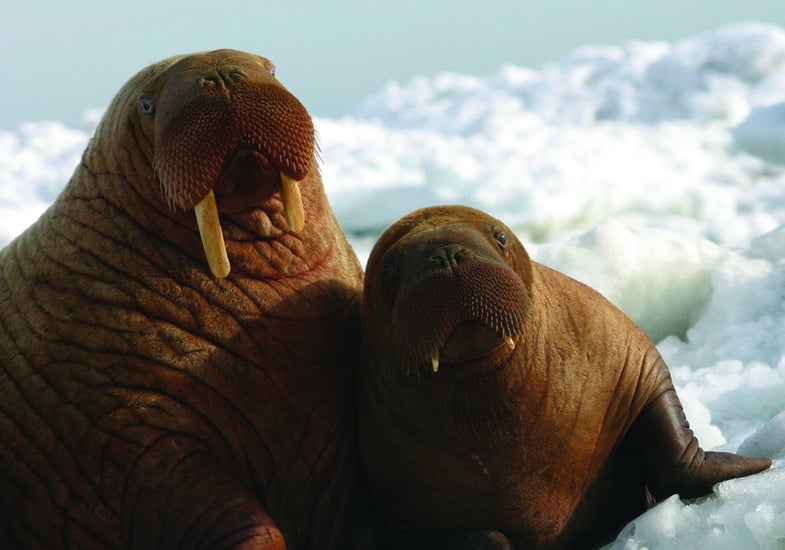 Everyone agrees that the Pacific walrus is stressed. The large, tusked pinnipeds depend on floating sea ice to rest and give birth in the spring and summers, when the Goldilocks-sized not-too-thin, not-too-thick ice floes they require are becoming increasingly rare. But coming to a consensus on how the large marine mammals will react to that stress is less straightforward.

“While the Pacific walrus will experience a future reduction in availability of sea ice … we are unable to reliably predict the magnitude of the effect,” read the official Fish and Wildlife service finding in October 2017, explaining the decision not to list the species under the Endangered Species Act despite the service’s own 2011 assessment that it was threatened by climate change. The text continued: “We do not have reliable information showing that the magnitude of this change could be sufficient to put the subspecies in danger of extinction now or in the foreseeable future.”

The “foreseeable future” is a term that defies easy description. It appears in the text of the Endangered Species Act as part of the standard to determine whether a species is “threatened”—that is, if it is at risk of becoming endangered or extinct in the foreseeable future. If so, under the 1973 law, it must be protected. But exactly how much of the future can be reasonably foreseen has so far been left to discretion of the Fish and Wildlife Service and the National Marine Fisheries Service, the two administering bodies of the landmark environmental law.

Until last week. Among a series of proposed changes to the Endangered Species Act was one provision that would define the “foreseeable future” as the time period extending “only as far as they can reasonably determine that both the future threats and the species’ responses to those threats are probable.”

As definitions go, it’s not exactly definitive—the rest of the document avoids setting any threshold for the foreseeable future, or suggesting standards by which to assess it. “Each species will be assessed on its own merits and what is probable for one will be different from another,” explains Gavin Shire, chief public affairs officer for the Fish and Wildlife Service. Shire also says that the changes are meant to make the service’s decisions more transparent: “This proposed change is to codify in regulation what has been established practice for about a decade now.”

Indeed, the decision not to list walruses as threatened was made months before these proposed changes were announced, and used an argument that hinged on the difficulties of foreseeing the future.

“Whenever you’re talking about the future, there’s uncertainty,” says Noah Greenwald, the director for endangered species at the Center for Biological Diversity. “And the problem with uncertainty is you can just make anything up about the future. You can say, ‘maybe walruses will adapt to areas without sea ice, we just don’t know.’ If you use uncertainty in that way to create unlikely scenarios and then use those scenarios, you’re moving out of a land of science and moving into fairy land.”

Then again, the land of science is not the native home of many Trump administration officials, many of them former lobbyists and oil industry executives, including deputy Interior secretary David Bernhardt, who organized the proposed changes to the Endangered Species Act. Bernhardt told the New York Times that the changes will “enhance the conservation of the species” while lifting “some of the unnecessary burden, conflict and uncertainty that is within our current regulatory structure.”

Environmental groups and scientists, by contrast, see the changes as an attempt to limit the protections extended to new species. “It is difficult to place any trust whatsoever in an administration that so openly disdains data, logic, information, reason, and the critical role of science in informed decision making,” says Rod Sayler, a conservation biologist at Washington State University. “By opening the door to interpreting what “foreseeable future” means, people may discount potential longer-term threats (such as those from climate change) and argue for shorter-term perspectives and more immediate benefits of development activities.”

The Center for Biological Diversity first brought the petition to list the walrus to the U.S. government in 2008, following an established path: that year, the Fish and Wildlife Service listed the polar bear as threatened due to climate change projections of sea ice loss, and the Arctic bearded and ringed seals followed in 2012. Industry groups including the American Petroleum Institute and the Alaska Oil and Gas Association challenged that designation, but the decision was ultimately upheld by the 9th Circuit Court of Appeals in 2018. Among the arguments were projections that showed the Arctic sea might experience ice-free summers as early as 2030. Already, limited sea ice has forced walruses to crowd onto land, sometimes resulting in them smothering young or stampeding each other when spooked.

The current administration has shown little indication that it intends to continue along that path. In fact, “climate change” does not appear in the text of the ESA proposed changes, nor in very many other places within the administration. Instead, the new text mentions only “environmental variability” as a potential source of uncertainty, and makes the point that “the foreseeable future for a particular status determination extends only so far as predictions about the future are reliable.”

But turning the “foreseeable” future into a matter of what is “reliable” and “probable” may invite challenges to future endangered species listings, says Dan Rohlf, an environmental law professor at Lewis & Clark Law School. He says both the tone of the proposed definition and the wording act as subtle limits on the law’s power.

“It certainly could allow the services to say, ‘Probable means more likely than not, and we’re not 51 percent sure that all the ice is going to disappear by the end of the century, so we can’t make that assumption’,” Rohlf explains. “The bottom line is, either through agency implementation or through some sort of judicial action, it becomes more likely that there will be fewer species listed as the services look at ‘foreseeable future’ more narrowly.”

“What’s being proposed for the Endangered Species Act is taking the teeth out of it, both in terms of language and in terms of how it will be implemented,” says Susan Clark, a conservation and policy expert at the Yale School of Forestry. By defining the future as a “probable” outcome, Clark believes the administration is giving itself a way to avoid the responsibilities enshrined in the Act. “All biological phenomena are probabilistic things,” she says. “Nothing is certain except death.”

It’s all part of a greater strategy to roll back all environmental protections in favor of industry, she says. “And language is being inserted everywhere to that end.” Efforts to undo the protections of the Clean Air and Clean Water Acts have followed a similar path, with wording that promises efficient and streamlined rules while deriding uncertainty and complication.

“This is really clearly an attack on the ESA,” says Greenwald. “Especially if you look at it in combination with their other efforts to weaken protections: the Clean Air Act, the Clean Water Act, the whole gestalt. I think what’s at stake is the quality of our environment: our climate future, the survival of wildlife, the survival of species.”

One of the places where these stakes are highest is the Arctic. Last year, the Republican-majority Congress passed a tax bill that included a call for sale of drilling permits in 1.5 million acres of the Arctic National Wildlife Refuge. The Trump administration has sought to undo an Obama-era ban on offshore drilling in the Arctic, and this month granted the first drilling permit in the region since Shell’s failed 2015 attempt.

The Chukchi Sea is part of the contested offshore drilling ban—it’s also the habitat for the Pacific walrus, which continues to feel the effects of climate change: bigger distances to cross between feeding grounds and resting places, less time spent at rest, and a food source, clams and mussels, threatened by ocean acidification. It’s true that their future, like that of many Arctic species, is uncertain—there’s no reliable evidence of what might happen next because the current rate and scale of environmental change on Earth has never happened before. All we have are the scientific probabilities and statistics and models that help us try to see into an unforeseeable future.

“Most people, I think, think that one thing leads to the next leads to the next, like a causal chain of certainty,” says Susan Clark. “Psychologically, most people need certainty–to think that tomorrow’s going to be like today, only better.” But whether we’re willing to accept it or not, she says, life is more like a weather forecast than a story of cause and effect. “There are no causal chains. Everything is probability.”