Kim the spider has a thing or two to teach us. 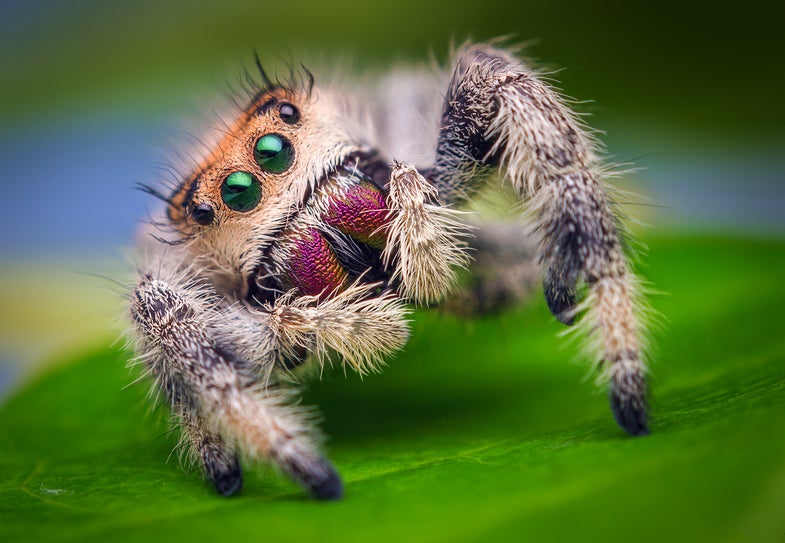 We know spiders best as quiet, eight-legged monsters who lurk around and trap their prey with webs and venom. But 13 percent of the more than 450,000 arachnid species can aggressively stalk prey and lunge at them with a jump attack, like an eight-legged tiger, or a horrible version of Aragog’s children on steroids.

Terrifying as it is, the way these spiders jump is worth studying. They can leap six times the distance of their body length from a standing start (humans can only manage a paltry 1.5 times their own length), and carry five times their weight into the air. Translating these physiological wonders into engineering strategies could revolutionize the type of robots we build and deploy—though hopefully not ones that lunge at human prey.

A team of researchers from the University of Manchester in the UK ran a study that trained a regal jumping spider (Phidippus regius) named Kim to jump across various distances of a platformed obstacle course, all while ultra-high-speed videos took footage of the leaps. The new findings, published in Scientific Reports on Tuesday, provide a more detailed look at the jumping mechanism by which this species and others make extraordinarily long and precise leaps.

“Our key finding for this species is that short range jumps tend to use low angled trajectories that minimize flight time,” says Russell Garwood, a paleontologist at the University of Manchester and a coauthor of the new paper. These types of jumps, traversing about 30 millimeters, were faster and prioritized speed and accuracy over other requirements.

Meanwhile, longer jumps (up to 60 millimeters in distance) used steeper takeoff angles to optimize flight time and allow the spider to travel a greater distance, but also minimized the amount of energy exerted. “Hence it seems the dynamics of the animals’ jumps differ depending on the nature of the jump,” says Garwood.

Jumping spiders possess an incredibly sharp sense of vision compared to other arachnids and arthropods, with four large eyes in front and four more smaller ones on the top of the head. This vision likely allows the spider to size up the distance and determine the proper timing and angle needed for the big (or small) leap. But that doesn’t mean these spiders can see very far. Kim’s upper limit of 60 millimeter jumps was self-imposed—she refused to attempt distances longer than that—likely not because she couldn’t make the distance (she often overshot the long jumps anyway), but because her eyesight failed her.

The researchers bought several regal jumping spiders from the local pet story in hopes of training them, but only the 150-milligram, 15-millimeter-long little bugger named Kim was willing to acquiesce to these demands. “I think, if I am honest, we largely overcame this through luck,” says Garwood. “We had to work really hard to even capture the jumps we did manage to capture on camera.”

The researchers noticed the regal jumping spider seems to use acute muscle contraction in order to pull off the leap, as opposed to using stored energy in a catapult-like mechanism, as many other arthropod species do.

“The key thing we had hoped to identify with this study,” says Garwood, “was whether this species used hydraulics in addition to muscles to power its jumps.” Spiders use haemolymph pressure (haemolymph is basically the arachnid version of blood) to extend their legs, and it was initially believed that hydraulic force worked in conjunction with the sheer power of the leg muscles to allow Phidippus regius execute ascending leaps, not just lateral or descending ones.

“Unfortunately we weren’t able to clarify this for sure,” says Garwood. Based on the jump observations and leg physiology data collected through 3D CT scans, the researchers found the jumps ought to be possible based solely on the power provided by leg muscle mass. Hydraulic force created by the haeolymph might give a boost to the spider as it jumps, but it’s not an essential feature . “We hope that future studies may shed light on this a little further.”

If the jumping physics could be replicated in a flying or jumping robot, it could help solve a lot of biomechanical constraints keeping most robots on the ground—namely, the balancing act between keeping a robot light and giving it enough power to leap large distances into the air—and maybe lead to a new era of microrobots. In factthe research team used the 3D CT scans of Kimto build a scale model of the spider’s legs and body structure complete with a jumping mechanism. Unfortunately, it bombed during the actual jump test. Turns out we’re still pretty bad at developing electronics that operate smoothly at this scale, and we’ll need more data that illustrates how spiders and other small creatures control how much force they exert when they jump and move around.

If the world ever becomes inundated by an army of small, jumping arachnoid robots, you’ll know this is one of the key research projects that begat that doom and gloom.

Note: a previous version of this article incorrectly stated that the spider weighs 150 grams. It actually weighs 150 milligrams. We regret the error and apologize for the nightmares.