Itsy bitsy spider robots might crawl around inside you one day

They're the smallest soft robots of their kind. 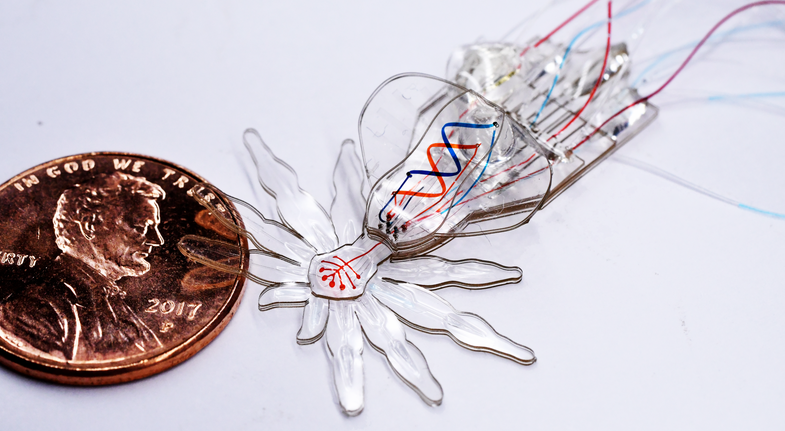 It doesn't quite have the same sweet moves as the real-world arachnid. Harvard University
SHARE

Less than 0.2 inches long and stylish to the point of gaudiness, male peacock spiders are some of the jewels of the arachnid world. Unless you live in parts of Australia and spend lots of time in the spring looking around for tiny spiders, you probably know them from GIFs, where their characteristic courtship dances have caught the eye of an internet always hungry for bizarre animals. Now, the jazzy little spider has provided inspiration for soft robotics researchers from Harvard University. Their new peacock spider robot is less than an inch long, and it has some amazing properties.

“The idea of designing and fabricating a soft robot inspired by the peacock spider comes from the fact that this small insect embodies a large number of unsolved challenges in soft robotics,” says lead author Tommaso Ranzani. Ranzani is now at Boston University, though he did this work while at Harvard. The spider is tiny and can move on a very, very small scale. To prepare for its mating dance, it also has “a large number of independently controllable degrees of freedom,” Ranzani says. That, and of course it looks super-cool, something the researchers were able to tap into using dyed water.

The water is an essential part of the spider robot’s ability to move. Liquid courses through tiny pathways in its body, specifically designed to cause the spider to move in specific ways. Although it can’t shake its booty quite as lithely as its arachnoid inspiration, the researchers say that this robot, or one like it, would be able to perform delicate surgical tasks at scales well under what’s currently possible for soft robots.

A look at this video of the robot in motion shows how fluid pumped through tiny passages in its body causes the tiny being to move in multiple ways—a total of 12 degrees of movement and a further six other kinds of alterations, including color and structure.

Given that veins, for instance, are at the micro- or even meso-scale, where this robot is able to act, there are clearly possible medical applications. Additionally, “if you want to go into the human body, you want to use something soft,” says Kam Leang, a robotics engineer at the University of Utah who also works on soft robotics for medical applications. Leang was not involved in the current study.

But the tiny peacock spider isn’t ready to strap on a surgical mask quite yet. This design is proof of concept for a new robot construction method known as Microfluidic Origami for Reconfigurable Pneumatic/Hydraulic devices, or MORPH.

The team constructed the spider in a single process over several days. First, they produced 12 layers of silicon, each with embossed patterns on it sort of like a computer chip. Then, they used tiny lasers to make those patterns even more structured, so when all the layers were stuck together, they formed what’s known as “embedded microfluidic circuitry.” This circuitry, when pressurized with fluids, is what causes the folding or origami to happen. If something like water or air is used, the spider can move into a new position and then move back to its original shape, but a fluid that goes solid when exposed to a stimulus like heat or UV light can leave the spider permanently “folded” into a new shape.

This sounds simple, but Ranzani says that precisely placing the layers during the bonding process and laser-cutting the pathways were both extremely delicate processes. The layers and channels of the spider are both less wide than a human hair.

Although it’s already pretty snazzy, Ranzani says the peacock spider robot is just the beginning. “This device is proof of concept of the manufacturing process,” he says. “We believe it will pave the way to a new generation of soft micro robots that can exploit their small scale, and deformable and resilient bodies, to explore highly unstructured and complex environments.”