New ideas have sprung up on the source behind Enceladus's ever-flowing geyser. 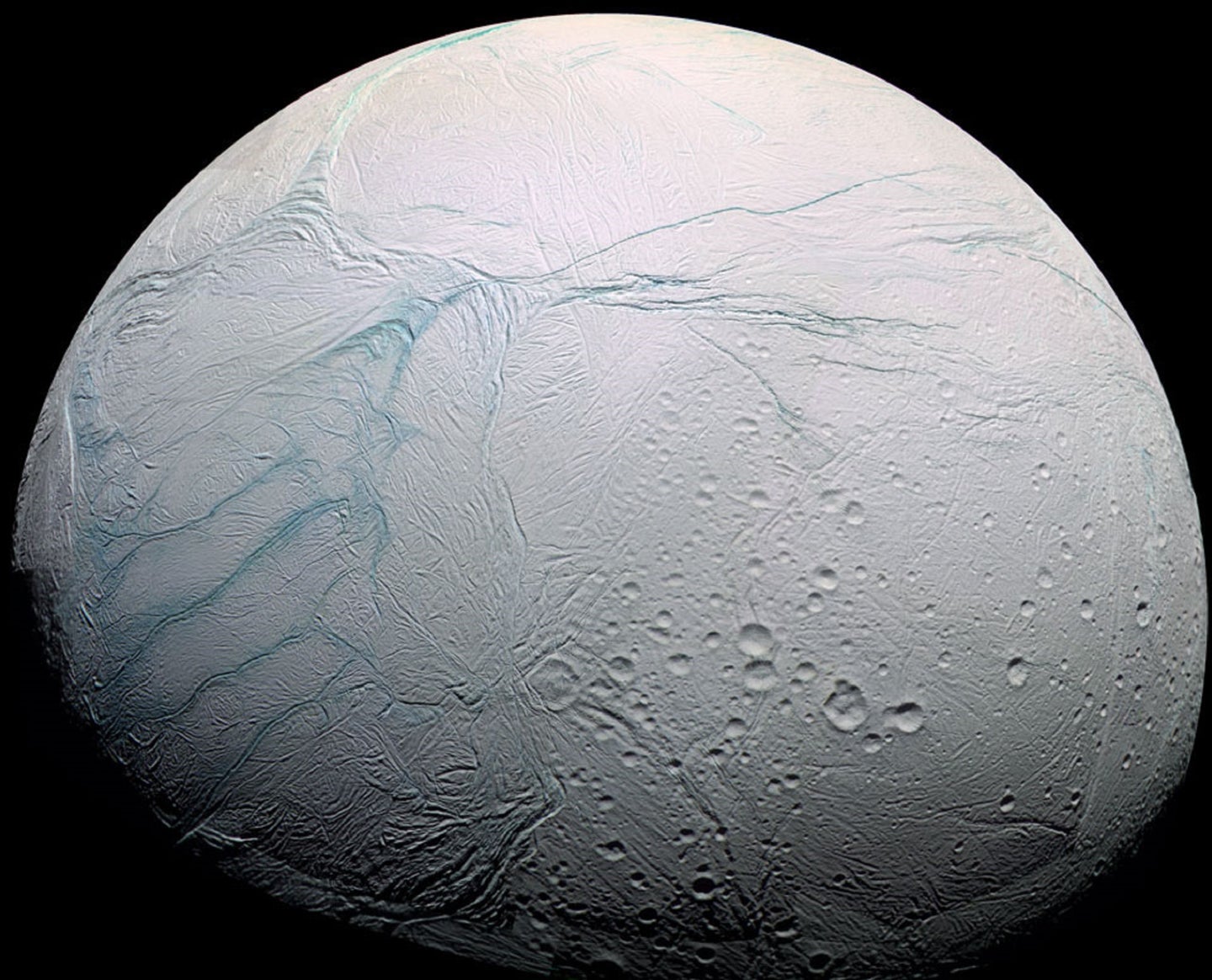 Enceladus, the sixth moon of Saturn, is roughly the size of the United Kingdom and covered in miles-thick ice. Underneath is a liquid ocean, which bursts out of the surface through a series of cracks at the southern pole, sending a constant geyser spraying out into space. That geyser contains traces of undersea vents, saltwater, and even methane, a sign that the pitch-black sea could contain life.

The moon is unique in the solar system, says Maxwell Rudolph, a geophysicist at the University of California, Davis. A new study he led, published in Geophysical Research Letters, proposes an explanation for the “tiger stripes,” and the geyser that burst through them. As Enceladus heats and cools down in orbit, its icy crust buckles under pressure, allowing water to spill towards the surface.

[Related: Saturn has a slushy core and rings that wiggle]

The cycles of heating and cooling are driven by the movement of the moon itself. Every hundred million years or so, the shape of Enceladus’s orbit around Saturn changes, from more circular to more oval and back. When the orbit is more oval, the moon is squeezed tighter by Saturn’s gravity and then released. “It causes the entire ice shelf to be stretched out, almost like it’s being kneaded,” says Rudolph. Just the slight heaving of that ice is enough to heat up the entire moon and melt the shell slightly.

Then, when the moon’s orbit becomes circular, its crust cools down again. The ice shelf expands downward into the hidden ocean. What happens next should be “obvious to anybody who has ever put a bottle of soda into the freezer,” says Rudolph. “The volume change as water freezes to ice causes the pressure to build up. [On Enceladus], this happens on a global scale.”

When the pressure gets too intense, the outer ice cracks, in the same way that a bread’s crust splits as the soft interior expands. The buildup takes millions of years, but the fissure appears  in seconds, starting at the surface and shooting down about nine miles to the underground ocean.

The cracks can only make it down to the ocean at the poles, where the ice is thinnest. “It’s kind of a matter of chance whether the first crack forms at the [Enceladus’s] north pole or the south pole,” says Rudolph. “But once it does, it sets up a series of events that lead to the tiger stripe fissures.” It’s possible that the process has happened repeatedly during each cold cycle.

But the pressure alone doesn’t quite explain the geyser. According to the models run by Rudolph and his team, even all the newly formed ice isn’t enough to squeeze water to the surface. And photos of Enceladus don’t show telltale traces of liquid water spilling out across the moon’s smooth exterior.

Here, a process described by Miki Nakajima, a planetary scientist at the University of Rochester who was not involved in the new study, might come into play. In 2016, Nakajima demonstrated that if liquid water pushed part of the way up a crack in the ice, it could begin to spontaneously boil in the vacuum of space. “We know the crack thickness on the surface, but we don’t really know what’s going on inside,” Nakajima says. “It could be a straight line; it could be weird.” Vapor could escape anyway because the boiling can happen in even the narrowest of fissures.

Any one crack leading to the ocean wouldn’t produce much water. Deep in the fissures, the water probably simmers, and a person standing on the surface would be surrounded by a fine mist, not a jet. It would take many crevasses and tubes to produce the geyser humans have photographed from space. Nakajima says that if the explanation is correct, there are many cracks smaller than the tiger stripes on Enceladus that astronomers haven’t gotten close enough to see yet.

Other forces could be at play, too. Dissolved carbon dioxide or other gases could bubble up to the surface like the carbonation in soda, shooting water to the surface. Unpublished work presented at the American Geophysical Union meeting last year also suggests that water could be released by melting ice in the crevasse, rather than from the buried ocean.

“I think everything is on the table,” says Nakajima.

Rudolph’s study also examined Europa, one of Jupiter’s most famous moons, which has both an ice crust and a liquid, subsurface ocean. But Europa is about five times the radius of Enceladus, and hot-cold cycles from gravity just aren’t big enough to pierce its thicker crust.

“I’m really intrigued by the model being able to explain Enceladus, but not Europa,” says Nakajima.

Elodie Lesage, an expert on Europa at the NASA Jet Propulsion Laboratory, writes in an email to Popular Science that there’s no direct evidence of cryovolcanoes on Jupiter’s moon, though certain plains of its surface look like they could be the result of liquid water But based on the new findings, she notes, any potential ice volcanoes on Europa probably form for completely different reasons than on Enceladus. “It seems unlikely that liquid water could rise from Europa’s ocean to its surface,” she explains. Instead, pockets of water could be embedded in the crust, and explode out when they begin to freeze, again “like a can of soda someone forgot in a freezer.”

Enceladus was last investigated by the Cassini space probe in 2015—it flew 30 miles above the moon’s surface—while the data on Europa’s ice eruptions mostly comes from far away telescope images. The next mission to Europa is planned to launch in 2024. “Whatever’s going on [there] is less understood,” says Rudolph.

That difference means that any hunts for alien life would unfold in separate ways on the two moons. If there are organisms living deep under the ice, Enceladus’s geyser appears to give us direct access to their world. Whatever lies inside Europa could be much harder to understand.