Saturn has a moon that looks just like a ravioli 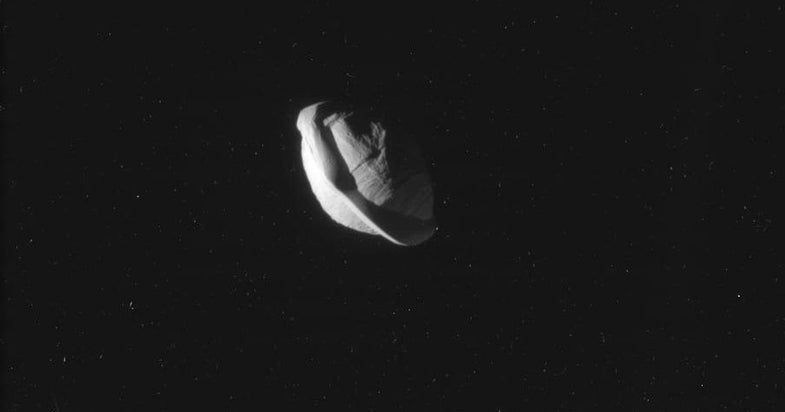 NASA just released the best-ever pictures of Saturn’s moon Pan, and mamma mia! Does that thing look like a ravioli, or what? Alternatively, one might argue that it resembles a UFO straight out of an Ed Wood film:

What it does not resemble, under any circumstances, is our standard model for an acceptable moon. Even ludicrously lumpy little moons like Pluto’s Nix look downright spheroid in comparison. But Pan doesn’t care. Pan moves to the toot of its own flute.

The new images come from NASA’s Cassini spacecraft, which was 15,268 miles away from Pan when it snapped the pasta-like pics. The bump is due to a prominent equatorial ridge that makes up about 10 percent of the tiny satellite’s volume. Three of Saturn’s moons host these equatorial bulges—the tiny Atlas seems to have a similar shape to Pan, and the larger Iapetus has one that kind of makes it look like a bath bomb—but they seem to be unique to the Saturnian system.

Scientists aren’t certain about the origin of these unique bulges, but Pan’s may have something to do with its prime position in Saturn’s orbit: In addition to being the planet’s innermost known moon, it orbits within a gap in Saturn’s A-ring. Even though Pan has a measly radius of around 8.8 miles, it’s able to act as a “shepherd moon”—it keeps the 200-mile gap clear. It’s possible the dumpling-like dimple comes from all the space dust Pan kicks up en route.

Jupiter might boast Europa, a moon so oceanic that NASA has boldly announced its intentions to find life there, but Saturn is certainly giving our solar system’s largest planet a run for its money in the moon department. Its 62-moon tally includes Titan (widely considered to be the most Earth-like world ever seen), the frosty ocean-world Enceladus, one that looks exactly like the Death Star, and a space ravioli. It’s a damn shame that the Cassini orbiter is set to make its final swan dive into Saturn’s rings this coming September.