Why are planets all the same shape?

Gravity makes the Earth round. 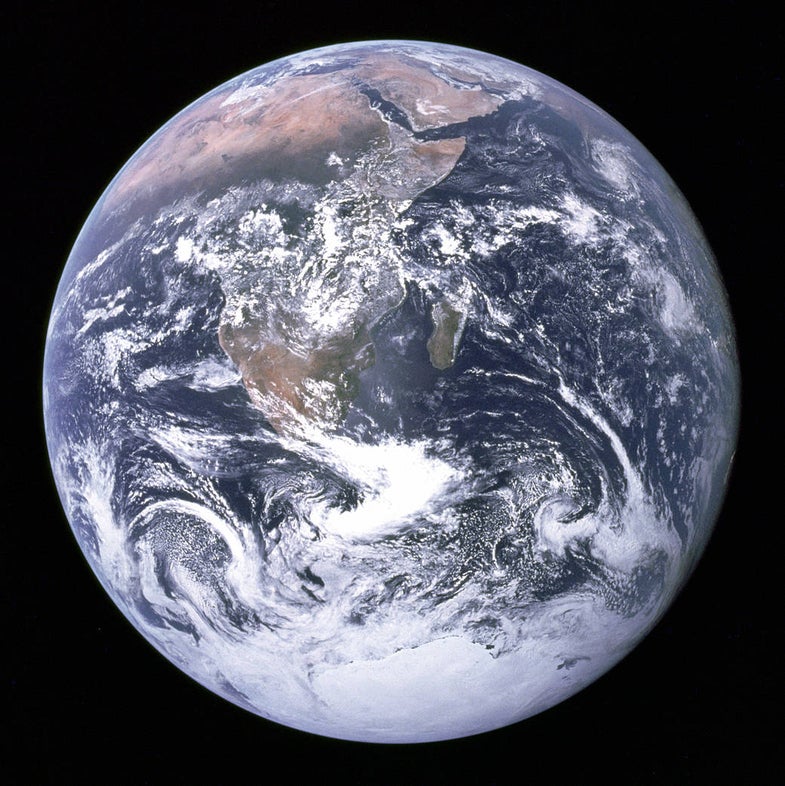 Sometimes scientists like to describe Earth as a blue marble because it’s round and has so much water. Earth’s oceans are pretty special—other places in the solar system have no seas, or any trace of liquid water is locked up under miles of ice. But our planet’s roundness is another story. From Mercury to distant Neptune, our neighbors are shaped like giant balls. Even worlds beyond our solar system are pretty round.

To understand why, we have to go all the way back to the birth of a planet—about 4.5 billion years in Earth’s case. Planets form in clouds of dust around new stars. As specks of dust collide, they stick together, forming bigger and bigger clumps.

As a planet like Earth grows, its gravity becomes stronger. Earth’s gravity is why we don’t float off into space; when we jump into the air, it pulls us back to the ground. Every object in the universe—including you—tugs at everything else because of gravity. But only when an object becomes really huge (like the Moon or Earth) can we feel this tugging.

Eventually, a brand-new planet gets so big that its gravity is powerful enough to make its surface actually crumple. It’s like how a cardboard box will collapse if you sit on it, explains Mark Sykes, CEO and director of the Planetary Science Institute in Tucson, Arizona. On a new planet, this happens from all directions at once, so the planet is crushed into a round shape.

A lot of other things in space are also round because of their gravity, like the Sun and our Moon. An object has to be pretty big—around 600 miles wide—for this to happen. Smaller things like asteroids and comets, which have weaker gravity, can have pretty weird shapes. Saturn’s moon Prometheus looks like a potato. There’s a comet shaped like a rubber duck floating around our solar system, too.

But even Earth isn’t a perfect sphere. As the planet spins, land and water reaches off into space, similar to how you have to hold on more tightly to a merry-go-round to stay put the faster it spins. Earth’s gravity is strong enough to keep everything in place while it spins, but it does bulge out a tiny bit at the equator.

The Moon doesn’t help, further distorting Earth’s shape. Tides on this blue marble are a result of the moon’s gravity pulling at our oceans. But even solid land bulges just a teensy bit in the middle.

Every object in space experiences its own unique push and pull. Mars spins about as fast as Earth does but has less gravity, so it bulges out even more, says Mark Panning, a planetary scientist at NASA’s Jet Propulsion Laboratory in Pasadena, California. The dwarf-planet Haumea, which lies beyond Neptune, spins so quickly it’s shaped more like a football than a basketball.

Keep in mind, though, that in the grand scheme of a giant planet, these are really tiny imperfections. If you eyeball Earth or even Mars from space, they’ll look pretty round.