This moon looks just like the Death Star, which isn’t suspicious at all

Keep an eye on Tethys 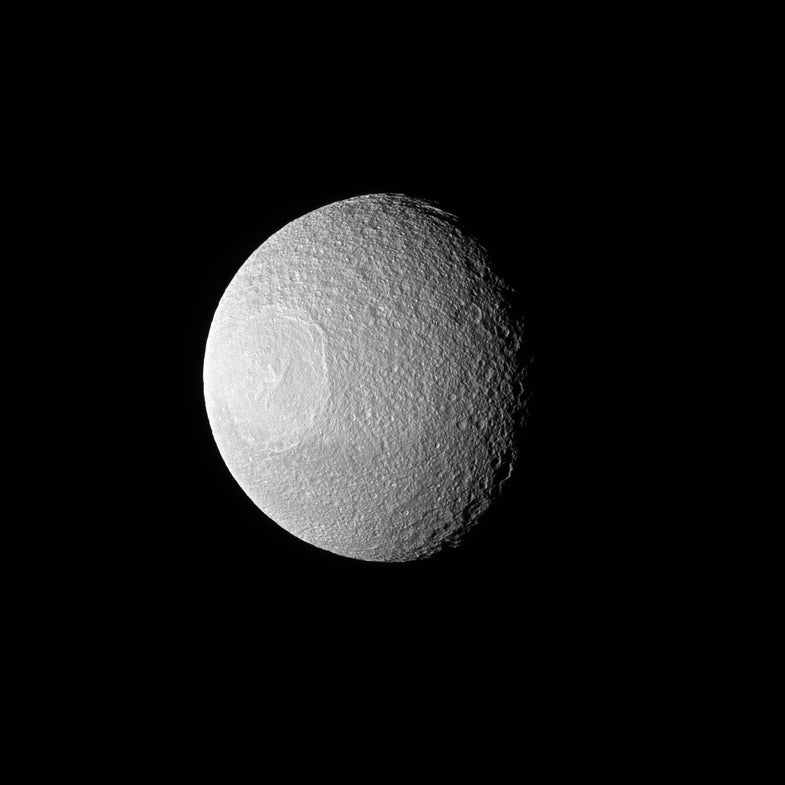 In an image just released by NASA, Saturn’s moon bears a striking but totally-not-disconcerting resemblance to a famous piece of sci-fi weaponry: The Death Star, a planet-killing behemoth recently brought back to life in “The Force Awakens”. Insert your Star Wars joke of choice here. Rinse. Repeat.

This “that’s no moon!” moon is Tethys, a 660-mile-wide satellite of Saturn made mostly of water ice. Its icy composition is what gives it such a spacecraft-like sheen (the only brighter moon in Saturn’s orbit is Enceladus, which is covered in an ocean topped with pristine ice, and it’s one of the most reflective objects in the solar system).

But the feature that makes Tethys really Death-Star-y is the huge honking crater on its surface. Dubbed Odysseus, the pock mark is one of the largest craters in the entire solar system. The rebound of whatever large object formed Odysseus produced some high mountains in the crater’s center, and they just happen to correspond to that little nubbin in the center of the Death Star’s, um, laser-y bit. Anyway, it’s uncanny! Alderaan better watch out.

The folks at NASA who unveiled this chill image, which was taken by the Cassini spacecraft back in November, actually think it resembles “an eyeball staring off into space,” which isn’t creepy either. Thanks, NASA!