It's designed to search for life on Jupiter's icy moon 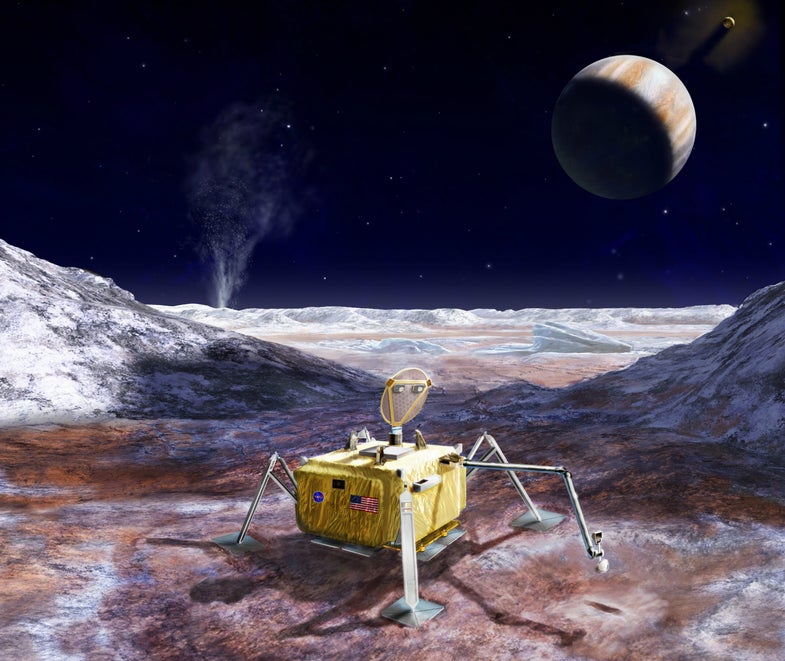 Artist's illustration of the proposed Europa lander. The mission is still in the preliminary planning stages, and subject to change. NASA/JPL-Caltech
SHARE

While many of NASA’s current missions are investigating Mars or various asteroids, a mission launching in the 2020s will land somewhere no human-made machine has landed before: Europa, the icy, ocean-filled moon of Jupiter. NASA has been talking about visiting Europa for years now, but last night the space agency dropped a 264-page report outlining the goals of the mission and which instruments they may want to send.

The report is preliminary and subject to change as the ideas get refined, but the basic gist is that the spacecraft could launch as early as 2024 and land on the icy moon in 2031. There, it will search for three things: evidence of life, conditions of habitability, and future places to explore.

The mission would launch on NASA’s next generation (and somewhat controversial) megarocket, the Space Launch System, and would be in addition to another mission, launching in the early 2020s, which plans to fly by the icy moon. The lander would use retrorockets and a sky crane to touch down softly (we hope) on Europa’s surface.

Europa is considered prime real estate in the search for alien life because it contains a vast ocean that makes contact with a rocky seafloor—like our own ocean. On Earth, the ocean floor infuses the water with energy and nutrients to support life, so the hope is that Europa’s sea has the same advantages. If the ocean does harbor some kind of simple lifeforms, scientists hope those organisms might make their way up to the surface via plumes that may erupt from it, or other movements of the ice.

The lander is expected to be able to dig down at least 10 centimeters below the surface, and will take five or more samples of the icy exterior. It would then analyze the material’s organic and inorganic contents, and put each sample under a microscope “capable of distinguishing microbial cells as small as 0.2 microns in diameter, and as dilute as 100 cells per cubic centimeter,” the report says.

Extreme radiation coming off of Jupiter means that if there are some sort of Europan microbes on the surface, they probably wouldn’t survive very long. And the lander won’t, either. Its delicate electronic equipment, housed within a radiation vault like the Juno spacecraft’s, is expected to survive about 20 days on the moon’s surface.

Even if it doesn’t find life, the lander will tell us more about humanity’s place in the universe. If it finds evidence that life could have evolved on Europa, but didn’t, we have to ask: why not?