Is something burping methane on Saturn’s ocean moon?

With water, hot vents, and tasty hydrogen, Enceladus has everything methanogen microbes could ever want. But is anybody home? 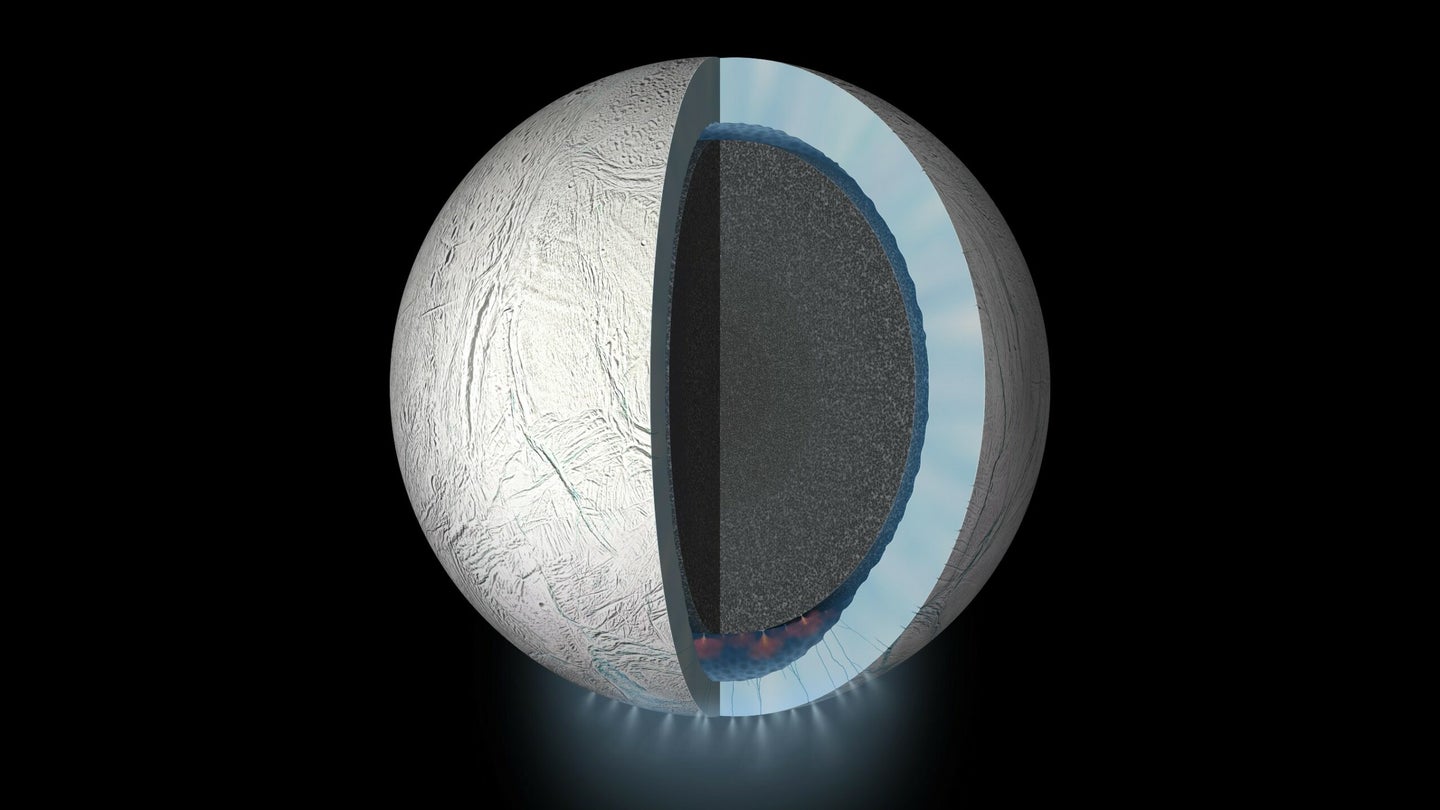 With a liquid ocean, hot vents, and tasty hydrogen, Enceladus has everything methanogen microbes could ever want. But is anybody home?. NASA/JPL-Caltech
SHARE

Enceladus was supposed to be a frozen world, a dead chunk of solid ice locked in endless orbit around Saturn. But when the Cassini spacecraft visited the system from 2004 to 2017, it discovered an active moon literally bursting at the seams with water, hydrogen, and methane: three substances that, in Earthly oceans, would go hand in hand with life.

But Enceladus is not Earth, and planetary scientists couldn’t be certain how to interpret the peculiar cocktail of molecules the Saturnian moon spits out into space. Were they the result of alien chemistry, or alien biology? Researchers still aren’t sure. Enceladus may or may not be home to alien “methanogens”—microbes that gobble up hydrogen and carbon dioxide and belch out methane. But a new analysis by a team of biologists, published yesterday in Nature Astronomy, shows that it’s almost impossible for so much methane to result from the most obvious chemical reaction alone.

“Methanogens are able to explain the amount of methane,” says Antonin Affholder, a doctoral ecology student at ENS Paris and lead author of the new research.

A world under the ice

The first solid proof that Enceladus’s icy crust was hiding an ocean came in 2006, when Cassini spotted water geysers gushing into space.

A decade later, while looping around Enceladus, the spacecraft plunged directly through one of the watery plumes — skimming just 30 miles from the moon’s surface. During this daring dive the probe sampled the molecules spilling out into space, essentially sniffing the ocean spray.

It got a nose full of water, with notes of hydrogen and methane. The hydrogen, researchers determined, was a sign not of life but of the potential for life. It was likely coming from deep sea vents. Such vents on Earth throng with microbial life, which feed on the hydrogen. These sites are even considered candidates for the original cradle of terrestrial life.

[Related: Saturn now has 82 known moons—so why did we only get one?]

And then there was that methane. Many of the ancient life forms that make deep sea vents their home devour hydrogen and carbon dioxide (CO2) and generate methane (CH4), earning them the name methanogens. With the discovery of just a few molecules, Cassini proved that Enceladus had just about everything necessary to keep simple organisms comfy—water, heat, and chow.

But the evidence was entirely circumstantial. Methane on Earth comes from various chemical reactions besides microbial digestion. Researchers puzzled over the abundance of hydrogen Cassini found too: a habitable Enceladus was overflowing with potential food, but nothing seemed to be eating it.

Affholder and his biologically minded colleagues decided to bring their understanding of populations and ecosystems to the problem, and set out to recreate all possible environments that could exist where Enceladus’s ocean meets its rocky core.

They started with the most obvious non-biological source of the methane. In places where hot water sloshes against certain minerals (such as in a deep-sea vent), a process known as “serpentinization” results in hydrogen. Then other chemical reactions can combine hydrogen and carbon dioxide into methane, just like methanogens can. Using data from recent experiments nailing down serpentinization rates, the group calculated a range of plausible amounts of hydrogen and methane Enceladus can plausibly make on its own.

The team then considered how that range of hydrogen and methane would change if Enceladus had help from methanogens. The researchers did their modeling with real organisms from Earth to keep their speculations about Enceladus life reasonable. “We cannot just imagine whatever we want to imagine,” Affholder says. “We have to ground assumptions in what we know.”

Finally, they used a statistical framework known as Bayesian analysis to compare the odds of the two sets of theoretical Enceladuses. To make as much methane as Cassini picked up during its geyser dive, they found, the chain of chemical reactions beginning with serpentinization is not enough.

“The first hypothesis is completely disqualified,” Affholder says, with a “score of zero.”

The researchers also found that the plentiful hydrogen is exactly what one might expect an inhabited Enceladus to spew out. The molecules cluster near the vents in a zone far too hot for known methanogens to survive. Any organisms would most likely nibble on molecules at a safe distance from the vents, where they would have little impact on the overall quantity of hydrogen.

Affholder emphasizes that his team’s result does not imply that Enceladus is swarming with methane-belching microbes. But it does mean that some unidentified source seems to be churning out the molecule.

The methane could, for example, be bubbling up from the core. If the moon formed mostly from colliding comets, it should be stuffed with rubbery, carbon-rich materials that break down into methane when heated. Or some completely unforeseen process could be at work. Researchers are drowning in their ignorance of what lies beneath the moon’s icy crust.

No lander will be drilling through miles of extraterrestrial ice in the foreseeable future, so researchers hoping to figure out what’s happening on Enceladus will have to make do with measurements at a distance.

[Related: Mars may have had recent volcanic eruptions—which is great news for finding life]

One strategy would be to examine the type of methane expelled. If its carbon atoms originally came from comets, by way of billions of years buried in the moon’s core, they may have different weights than the carbon atoms consumed and expelled by microbes. A Cassini sequel with updated instruments might be able to distinguish between the two.

“To know more, we might need a mission to examine methane,” Affholder says.

But with no new probes to the Saturn system on the horizon, researchers are turning their attention toward another icy moon—Jupiter’s Europa. After it launches later this year, the James Webb Space Telescope might be able to make out the contents of geysers there. An orbiter capable of directly sampling the plumes, just like Cassini did, is in the works too. Europa itself may be habitable, and if it isn’t, answering some basic questions about its history could inform the backstory of its icy cousin.

Affholder and his collaborators are also working on developing similar analyses to calculate the odds of extraterrestrial life on exoplanets, where atmospheric blends of oxygen, carbon dioxide, and other gases will be even more complicated to interpret than Enceladus’s molecules. Their work foreshadows an era of astrobiology where any discoveries of alien life will come not with the bang of a smoking gun, but with the mounting whimpers of successive statistical analyses.