It’s official: Saturn’s moon has just about everything you need to make life 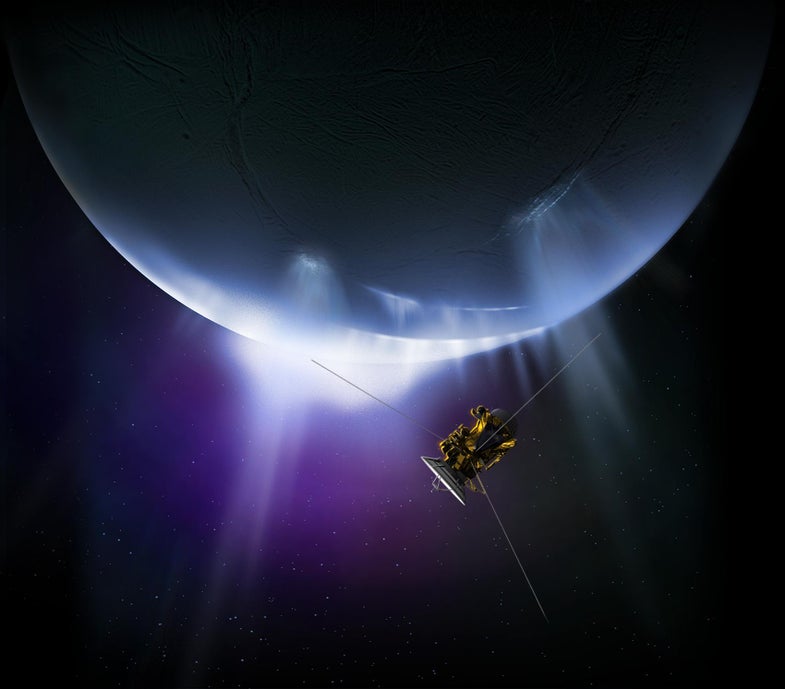 The results are back from the Cassini spacecraft’s closest encounter with Enceladus, and they’re good news for folks who hope to find aliens on Saturn’s icy moon.

Cassini discovered geysers shooting out of Enceladus’ south pole back in 2005. The eruptions pointed to an ocean inside the giant snowball, heated by Saturn’s gravity deforming the moon’s core. Where there’s water, there may be life, so NASA has considered Enceladus a top spot to search for alien microorganisms ever since.

In October 2015, Cassini plunged to within 30 miles of the moon’s surface, swooping through its geysers and trying to taste the ocean below. Scientists have just finished parsing the data from that encounter, and they reveal that Enceladus has one more essential ingredient for life: food.

The results are published today in Science, led by Hunter Waite from the Southwest Research Institute.

Although we still don’t know whether or not Enceladus actually has simple life forms living in its ocean, “almost all of the conditions that astrobiologists have identified for habitability are present on Enceladus: water, organics, and a chemical energy source,” says Waite. “The only things that are left on the checklist are phosphorus or sulfur.”

The hydrogen is also significant for where it may come from. After evaluating a number of sources, Waite’s team concluded that the hydrogen is almost definitely coming from active hydrothermal vents at the bottom of the moon’s ocean—as the water makes contact with these molten rocks, a chemical reaction splits the water, forming hydrogen.

On Earth, deep-sea vents provide heat and energy, supporting a stunning amount of life on the dark ocean floor, completely independent of sunlight.

“If correct, this observation has fundamental implications for the possibility of life on Enceladus,” wrote geochemist Jeffrey Seewald in a commentary accompanying the paper. “[C]hemical disequilibrium that is known to support microbial life in Earth’s deep oceans is also available to support life in the Enceladus ocean.”

As for searching for the sulfur and phosphorus—the two remaining ingredients for life as we know it—that will have to wait for another spacecraft. Cassini will be retiring this year without making any more trips to Enceladus. And in any case, Waite says its instruments likely wouldn’t be able to detect those elements at low levels. Cassini was built before scientists knew about the geysers, so it’s not built to test for amino acids and other possible indicators of life.

However, NASA is potentially interested in funding future Enceladus missions through its 2017 New Frontiers program.

Of course, if an Enceladus mission does receive funding, the spacecraft likely wouldn’t reach Saturn’s moon until the 2030s, says Waite. “That’s the tough thing about the outer solar system.”

Until then, we’ll just have to hope that scientists dig up some more clues in the treasure trove of data that Cassini has sent back over more than a decade in the Saturn system.