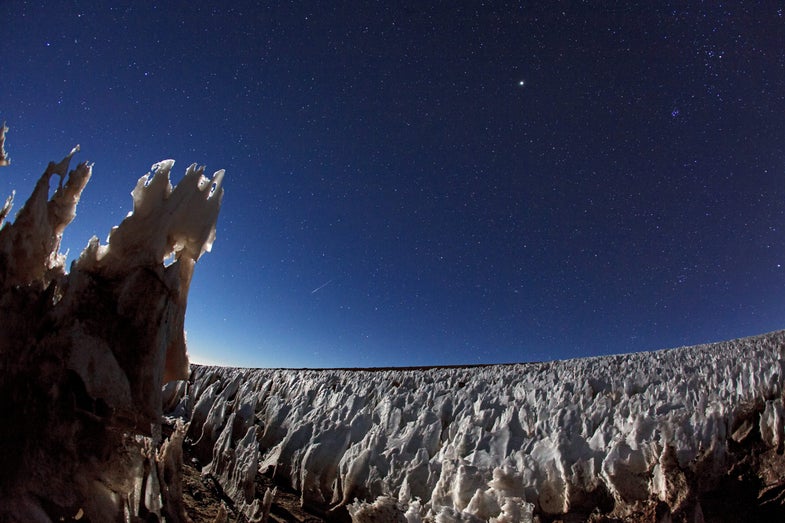 Blades of ice the height of five-story buildings might cover the equatorial belt of Jupiter’s moon Europa, potentially complicating any potential spacecraft landings there, a new study finds.

Europa, which is roughly the size of Earth’s moon, has a hard surface of ice 10 to 15 miles thick. Scientists think this frozen shell conceals a saltwater ocean that could reach depths of 100 miles. Since there is life virtually wherever there is water on Earth, this hidden ocean may be a promising target in the search for extraterrestrial life.

In order to peek beneath the crust, humans would have to send a spacecraft to Europa, and risk landing on its mostly uncharted exterior. Previous missions including NASA’s Galileo orbiter found the frozen moon’s surface is cracked with ridges and grooves, but lacked images detailed enough to reveal how smooth or rugged the ice is between these features.

One clue to what future space probes might encounter on Europa are extreme cold and dry conditions on Earth. For example, in the high parts of the Atacama Desert in Chile, where there is bright, sustained sunlight and cold, dry, still air, the sun’s rays can lead ice and snow to undergo sublimation — becoming water vapor without melting first. This can leave behind massive blade-like formations called “penitentes” up to about 16 feet high all oriented together in the direction of the noontime sun. (Penitentes get their name from how they resemble a congregation kneeling in penance.)

Recent findings discovered hints of penitentes made of frozen methane on Pluto as well. “It was just a matter of time before we started to imagine that these jagged terrains might exist elsewhere in the solar system,” said study co-author Orkan Umurhan, an astrophysicist and planetary scientist at NASA Ames Research Center at Moffett Field, California. Umurhan and colleagues published their findings in Nature Geoscience today.

To see if penitentes might also jut out from Europa, the scientists calculated the sublimation rates of water ice across Europa’s surface. They compared these with other events that might also erode the icy moon’s surface, such as meteorite impacts and bombardment from electrically charged particles blasted at Europa from Jupiter.

The researchers found that sublimation would lead to a rougher surface on Europa, whereas the other mechanisms would smooth it. In the equatorial bands of Europa, they discovered that sublimation should be the main erosional process, strong enough to sculpt penitentes up to roughly 50 feet tall and 23 feet wide over the course of 50 million years, which is the average age of Europa’s surface. Such penitentes might explain radar and thermal anomalies seen around Europa’s equator, the scientists added.

“It is always pleasant to see how rigorous science can help us imagine how the surface of an unknown planet could be at a scale never observed yet,” said planetary scientist Cyril Grima at the University of Texas at Austin, who did not take part in this research.

Jagged zones of giant penitentes might pose a hazard to any space missions landing on Europa, such as “NASA’s Europa lander concept, a four-leg static platform,” Grima said. If scientists want to land a probe at Europa’s equatorial latitudes in the future, reconnaissance to identify where penitentes are is key. “The payload of the upcoming Europa Clipper is perfectly suited for that kind of detection,” he noted.

It’s also possible that future scouting missions won’t find any penitentes at all. The computer models the researchers used for penitente formation on Earth might not apply to Europa, which unlike Earth has no real atmosphere and where ices are typically loaded with salt and sulfurous compounds, said astrobiologist and planetary scientist Kevin Hand at NASA’s Jet Propulsion Laboratory in Pasadena, California, who did not participate in this study.

“We’ve looked into this problem, and we decided the best thing to do is to just build Europa in the lab,” Hand added. “So far, our team has yet to see penitentes form in the lab under conditions comparable to Europa. I’m sure there are strange formations on Europa, but they are not formed by the same physics that drives penitente formation on Earth.”

Europa might not be the last place that scientists might find penitentes or similarly odd structures. “It’s becoming apparent that landforms sculpted by sublimation might be pretty widespread among icy bodies in the solar system,” Umurhan. “When you go to the Atacama Desert and see these, it feels pretty otherworldly, and now we see that really is the case.”