Eat like an ancient Roman by recreating bread from Pompeii 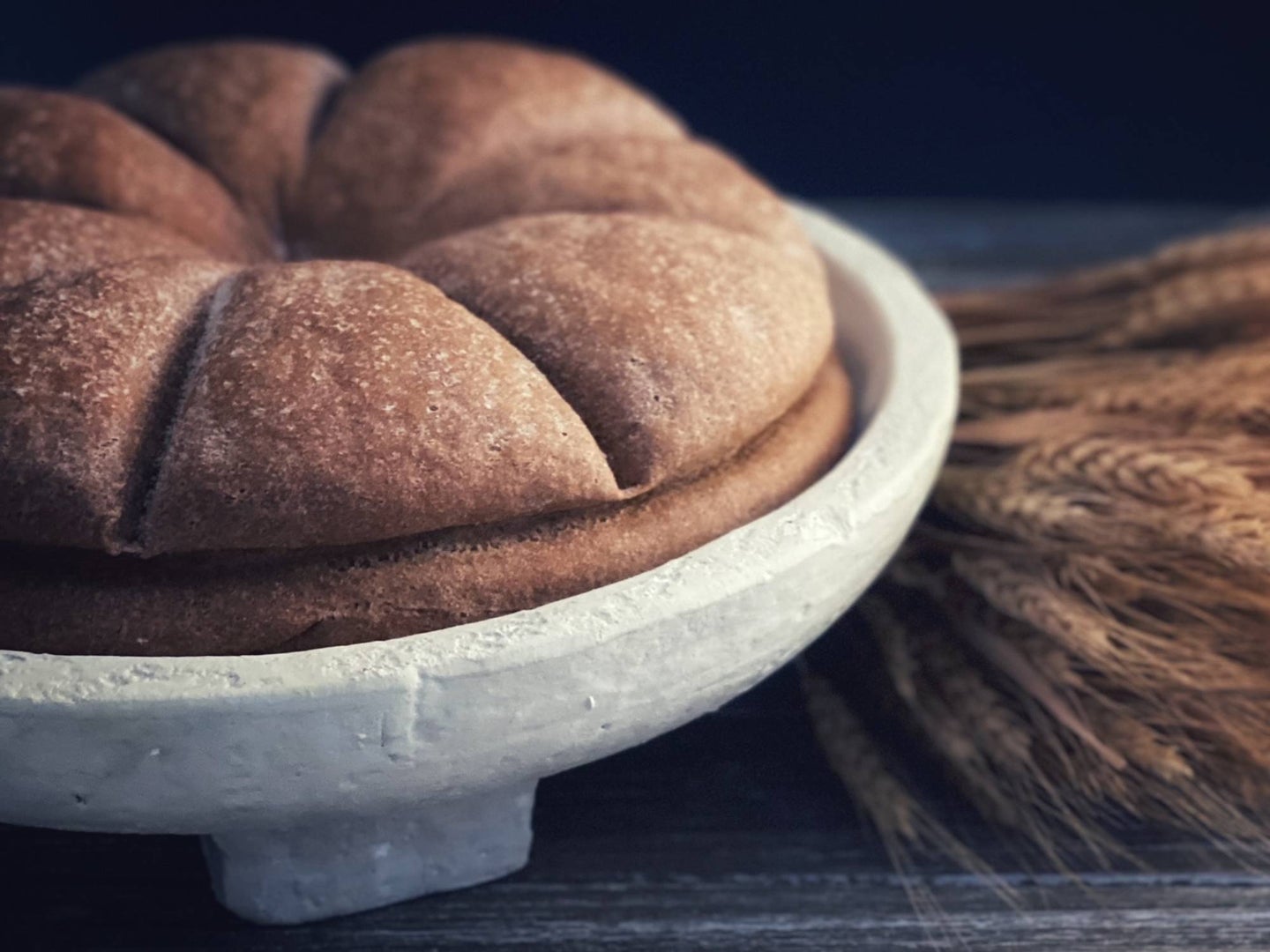 Who needs a bread knife when you have indents?. Photo courtesy of Farrell Monaco
SHARE

Bread is a staple in kitchens across the globe and sliced varieties changed modern life forever.

This essential food made headlines during the first months of quarantine when the internet suddenly became awash with people learning how to make sourdough. While the carb craze of 2020 may be over, baking bread for our enjoyment and wellbeing (both physical and mental) has been around for thousands of years.

Through archeology, food writer and researcher Farrell Monaco wants to revive our primal relationship with bread. As an experimental archaeologist, the founder of the award-winning blog tavolamediterranea.com has spent years studying Panis Quadratus, the carbonized loaves excavated from an oven in Pompeii, Italy.

Now, she’s ready to reveal her findings and her own version of the recreated recipe, which she based on her research on this bread that dates back to the eruption of Mount Vesuvius in 79 AD.

Dust off your starter—it’s time to bake.

The mysteries of the bread

Between archaeological evidence, written records, and fresco paintings, not to mention scientific experimentation, the story of Panis Quadratus slowly revealed itself. It’s been a long time coming, and some of the loaves’ characteristics have stumped archaeologists for decades. But Monaco has come to a few conclusions.

For starters, there’s the shape of the bread—a round piece that appears to have been imprinted so diners could easily break it into eight triangular sections. She believes this was meant to help the portioning of the bread in a time when serrated knives for this purpose weren’t widely available.

[Related: Burnt bread shows that our ancestors were baking 4,000 years before agriculture]

Panis Quadratus also showed evidence of a band wrapped around the outside of each of the loaves. Most experts still don’t know for certain what ancient bakers used it for, but Monaco believes it likely served two purposes: keeping the pieces from spreading during baking in commercial ovens where space was at a premium, and making it easier for porters or bread hawkers to loop loaves onto poles and carry them around town.

As for the composition of the bread, it was likely made of common wheat and not spelt, as many historians postulate. Monaco posits the bread may even have contained parsley, fennel, poppy seeds, and Roman Coriander in some markets, a testament to the Romans’ sophisticated style of bread-making and adventurous flavor combinations.

Several forthcoming publications to be released starting this winter will fully reveal these findings, including a chapter by Monaco in The Bloomsbury Handbook of Experimental Approaches to Roman Archaeology. Fortunately, you don’t have to wait to make this Pompeiian bread yourself.

Monaco reconstructed this recipe for Panis Quadratus with Git (Roman coriander) to mirror several of the loaves found in Pompeii. You can bake it in a modern oven or using more authentic methods. Just don’t expect there to be any leftovers tomorrow.

1. (Optional) Make a bread starter. If you don’t have one already, start by growing one. We recommend using this recipe for a legume sourdough starter from Monaco’s blog.

Alternatively, create a sponge by mixing 65 grams of flour and the same amount of water with a teaspoon of baker’s yeast. Sponges work just as well as starters, and you can make exactly the amount you need using store-bought baker’s yeast. After an hour or two, once the sponge has risen and tripled its size, add it to the recipe as a starter.

2. Parch the git seeds. Pour the seeds onto a dry, hot skillet on high heat for a few minutes until the seeds begin to pop. Finish by taking them off the heat.

3. Dissolve your starter or sponge in tepid water.

4. In a bowl, mix your dry ingredients. Make sure the git seeds have cooled down and fold them into the flour.

5. Combine the wet and dry ingredients and knead. Adjust your water and flour content to achieve a firm dough. Your goal is to get a ball that doesn’t stick nor leaves flour behind.

Note: The texture of the flour you use (coarse or fine) may affect the level of hydration of your dough. To solve this, sprinkle a couple of drops of water or a light layer of flour accordingly.

6. Let the dough rest for 2 hours. Leave it in a bowl in a warm, humid place and cover it with a clean, damp cotton tea towel to keep the surface moist.

7. Knead the dough again for 5 to 10 minutes. Sprinkle the salt on the dough as you knead and fold.

8. Let the dough rest for 2 hours. Follow the same instructions as in step 6.

8. Shape the loaf. Rotate and tuck the sides and seams under and towards the center of the dough to make a round cake.

Pro tip: You can use a bench knife or the side of your hand to control the underside of the dough and shape it as you work it.

9. Preheat your oven to 400 degrees Fahrenheit.

10. Let the dough rest and rise again for another hour. This time, place your uncooked loaf on a surface dusted with flour or on the sheet that you will bake it on. Cover the dough with a damp tea towel and leave it in a warm place. Warmth (like that from near a preheating oven) promotes yeast growth.

Note: The dough should be roughly 1.3 kilograms or 2.8 pounds, the equivalent of 4 Roman libre. This is enough to make a modern-age Panis Quadratus that matches several of the archaeological specimens found at Pompeii and Herculaneum.

10. Dust the top of the loaf with flour.

11. Decorate your loaf. Panis Quadratus is famous for its characteristic beltline. Create it by tying twine snuggly around the outside edge of the loaf. Next, mark the eight wedges on the top side of the bread. You can do it by pressing twine, a reed, a skewer, or a chopstick. These are not incisions: Do not use a knife as cutting the loaf causes splitting and further expansion during baking.

Finally, create the puncture at the top of the loaf. Use a sharp knife or the tip of your reed and press it into the center of the loaf straight down to the bottom. If using a reed, pivot it back and forth a few times to create a small slit in the dough.

13. Let the loaves rest for about 2 to 3 hours or until completely cool. Serve with sides or condiments that the Romans commonly used, such as salted broth, lentils, stews, milk, olive oil, red wine mixed with water (“You read that right—drinking wine straight in ancient Rome was in very poor form!” says Monaco), ricotta, aged or smoked cheese, figs or dates.

Little food remains in the ruins of Pompeii, making these loaves discovered in an oven by Giuseppe Fiorelli in 1862, even more intriguing. Since 2019, Monaco has studied the carbonized bread at the National Museum of Archaeology, in Naples. There, she has examined its composition, shape, and anomalies, while referencing archaeological and written records to back up her theories.

She’s not new to this either. Monaco’s specialty is studying ancient food—particularly Greek and Roman—and recreating recipes and narratives to help us better understand not only the culture and civilization of the period but our shared history. That’s the experimental part of experimental archaeology.

[Related: What archaeologists got wrong about female statues, goddesses, and fertility]

“Looking at something in a glass cabinet doesn’t tell you much, but when you’re deconstructing and reconstructing an object, you are able to step into the shoes of the creator and understand the object and its purpose much better,” she says.

But it’s not just about the bread. Telling the stories of the people behind it—largely women and slaves, who tend to be invisible in historical records and modern scholarship—are just as important to Monaco. There’s a human connection in every loaf that she wants to bring into focus.