Charon is the real #SuperBloodMoon in latest New Horizons pics 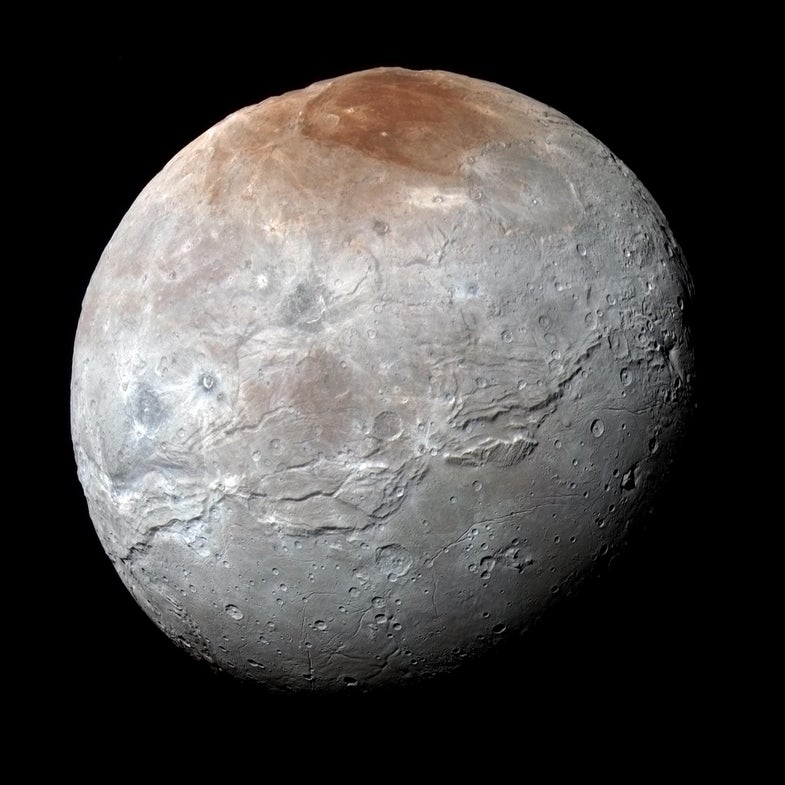 The largest moon of the dwarf planet Pluto looks absolutely breathtaking in new high-resolution images captured during the New Horizon spacecraft's flyby, and released by NASA in September 2015. This particular image was snapped by the Ralph/Multispectral Visual Imaging Camera (MVIC) on the spacecraft and includes details as small as 1.8-miles across, according to NASA. The colors have also been enhanced, combining red, blue, and infrared images, so that Charon's various geological features are easier to see. NASA/JHUAPL/SwRI
SHARE

Pluto has gotten a lot of love lately, both from scientists and the unscientific alike, thanks largely to the series of beautiful close-up images that NASA has published online following the unmanned New Horizon spacecraft’s flyby of the dwarf planet earlier this year. But now Pluto’s moon Charon is getting its own chance to shine in the spectacular new high-res images that NASA released today.

Charon is Pluto’s largest moon, but it is relatively tiny for the Solar System at just 754 miles in diameter (compared to Pluto’s 1,473-mile diameter). One of five moons orbiting the dwarf planet (the others are Nyx, Hydra, Kerberos, and Styx), Charon was long thought to be a relatively boring, crater-pocketed world, at least as far as its terrain goes.

But thanks to the New Horizons flyby, we now have access to the closest views of Charon ever captured—and they don’t disappoint. The images reveal this little alien moon is actually a fascinatingly diverse world, with a humungous canyon system stretching over 1,000 miles East to West across its meridian (about four times the length of the Grand Canyon, as NASA points out its news release). As John Spencer, a member of the New Horizons Geology, Geophysics and Imaging team put it in a statement provided by NASA: “It looks like the entire crust of Charon has been split open.” That may actually be fairly close to what happened on Charon in the past, because the canyon was clearly the result of some massive geologic or tectonic shift.

NASA stitched some of the new images together into a breathtaking video flyby of Charon, as well.

The new images have also led scientists to conclude that the smoother, less crater-dotted region of plains located just below the canyons in Charon’s southern hemisphere —a spot they’re calling “Vulcan Planum”— is a more recently-formed landscape. The fewer number of craters indicates the landscape hasn’t had as much time to be battered by meteors as other parts of Charon, and that there was some more relatively recent geological activity in the area, in order to smooth over any previously existing craters. Even more exciting is the possibility that Charon could have once had a subsurface ocean of liquid water, which later froze, then cracked open releasing lava to the surface, helping to form the new smooth terrain.

And if you think these views of Pluto’s biggest moon are great, you’re in luck: more and closer images captured by New Horizons are being processed and should be released in the coming months. That should help scientists learn even more about this mysterious world at the edge of our Solar System. 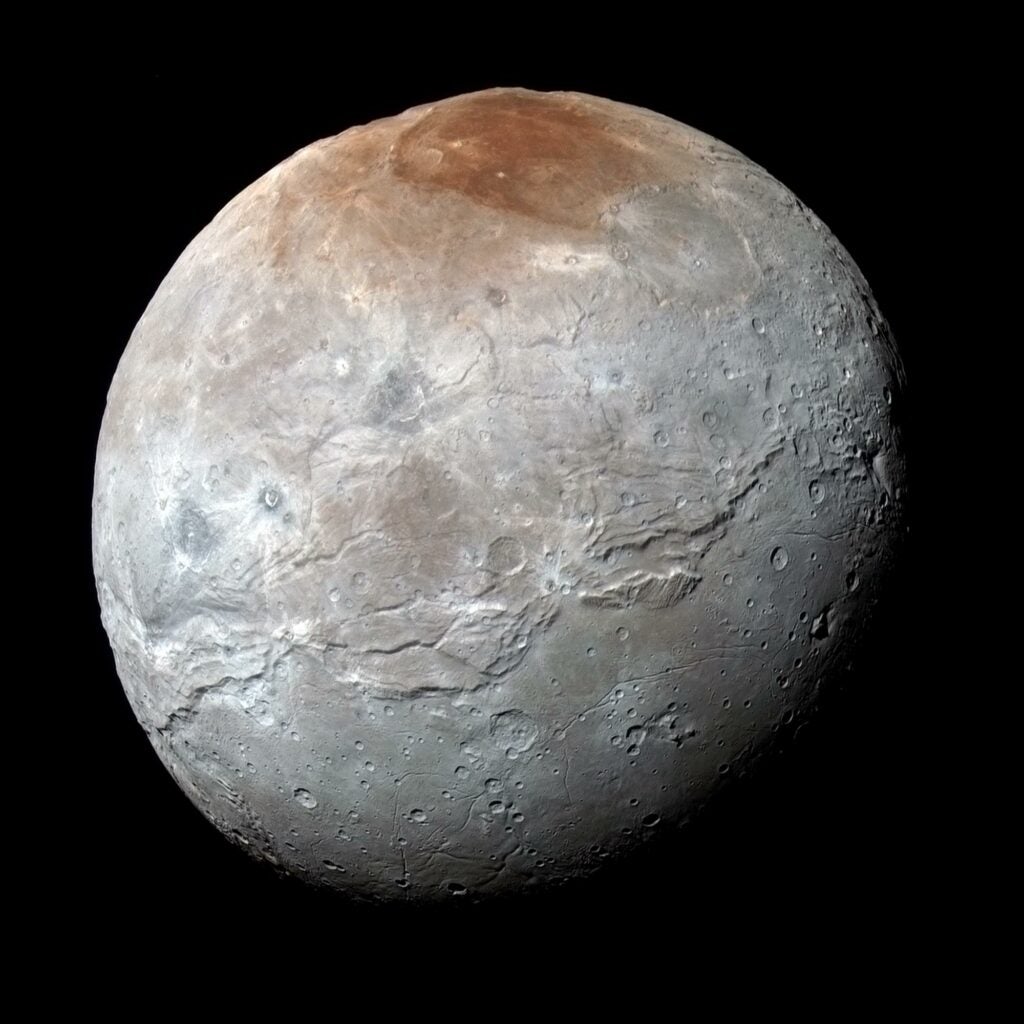 Pluto’s moon Charon, closer than ever

The largest moon of the dwarf planet Pluto looks absolutely breathtaking in new high-resolution images captured during the New Horizon spacecraft’s flyby, and released by NASA in September 2015. This particular image was snapped by the Ralph/Multispectral Visual Imaging Camera (MVIC) on the spacecraft and includes details as small as 1.8-miles across, according to NASA. The colors have also been enhanced, combining red, blue, and infrared images, so that Charon’s various geological features are easier to see. 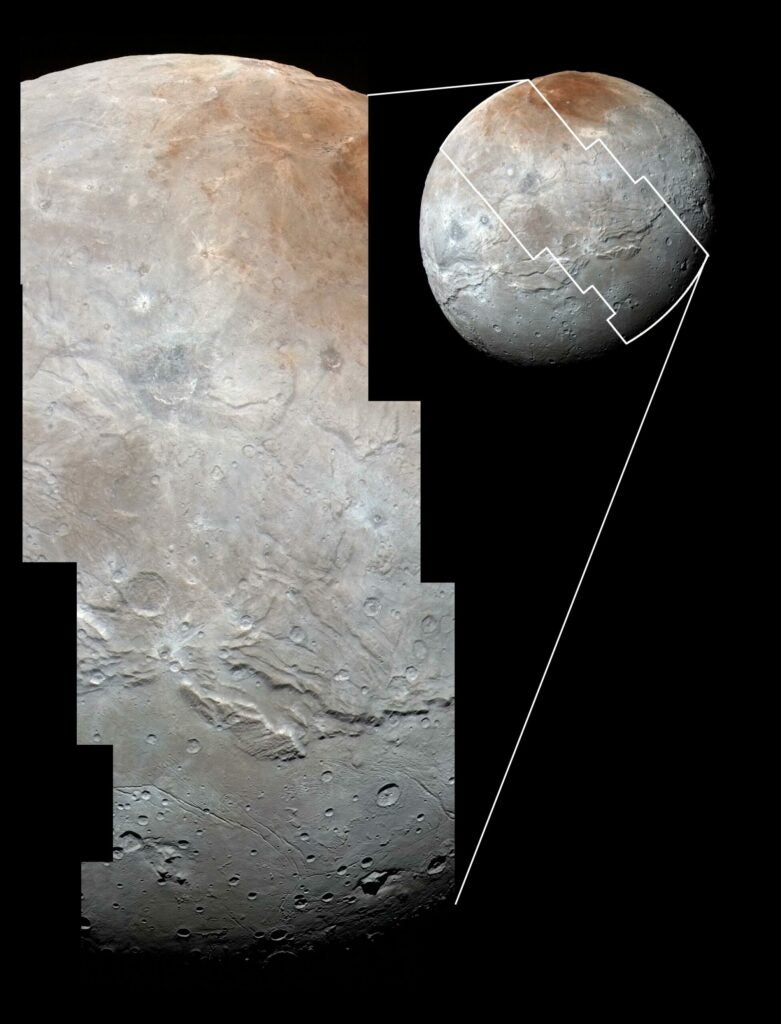 Call it the Grand-er Canyon. Or maybe the Grandé Canyon. Whatever it is, the system of canyons and trenches stretches across Pluto’s moon Charon for over 1,000-miles, nearly four times as long as the Grand Canyon on Earth, according to NASA. 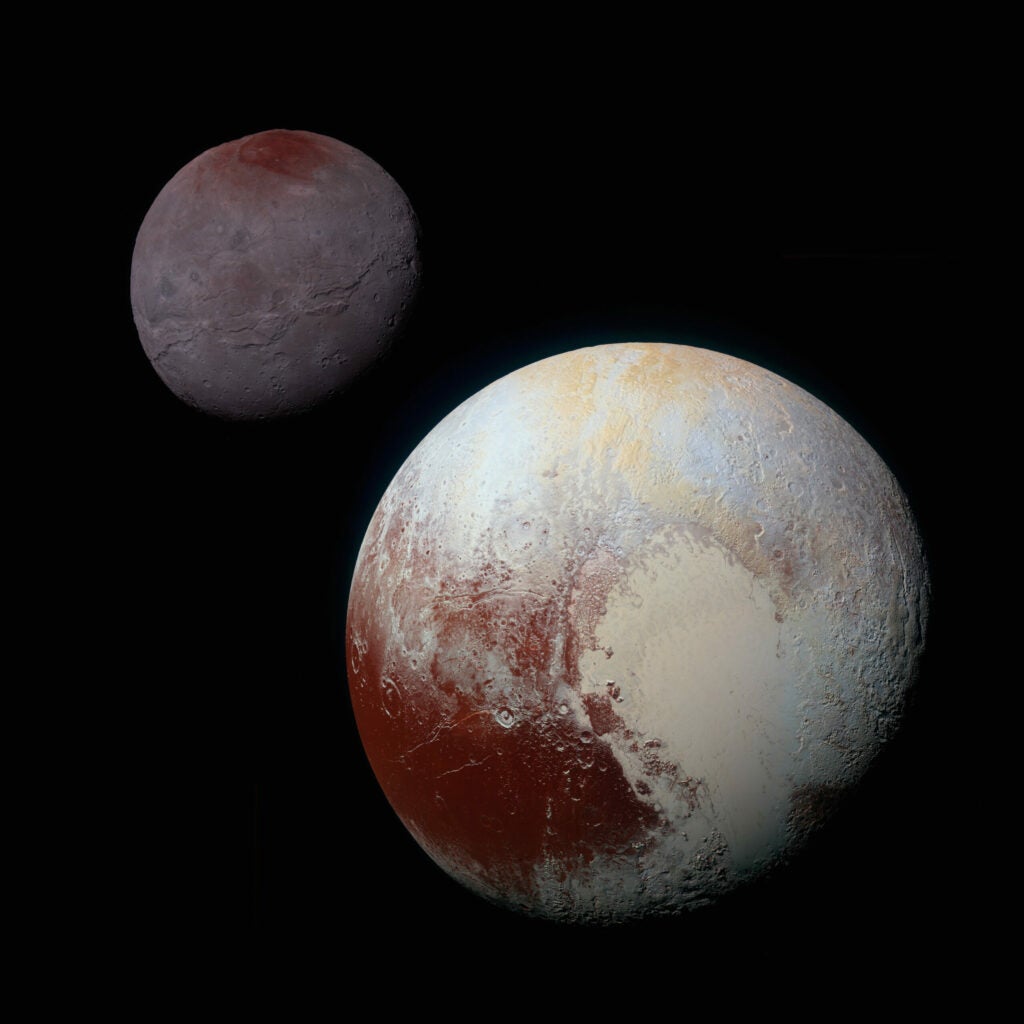 Pluto and Charon, the dwarf planet and its largest moon

Images of Pluto (right) and its biggest moon (Charon) captured separately by the New Horizons spacecraft during its flyby of Pluto in July 2015 have been color-enhanced by NASA, and combined into a mosaic released in September. The mosaic shows both worlds adjusted to account for their relative size: Pluto at 1,473 miles in diameter (2,370 kilometers), and Charon at just 754 miles in diameter (1,214 kilometers).
geology