Black holes have a reputation as devourers. But they can help spawn stars, too.

In a first, astrophysicists observe a black hole help create new stars in a dwarf galaxy. 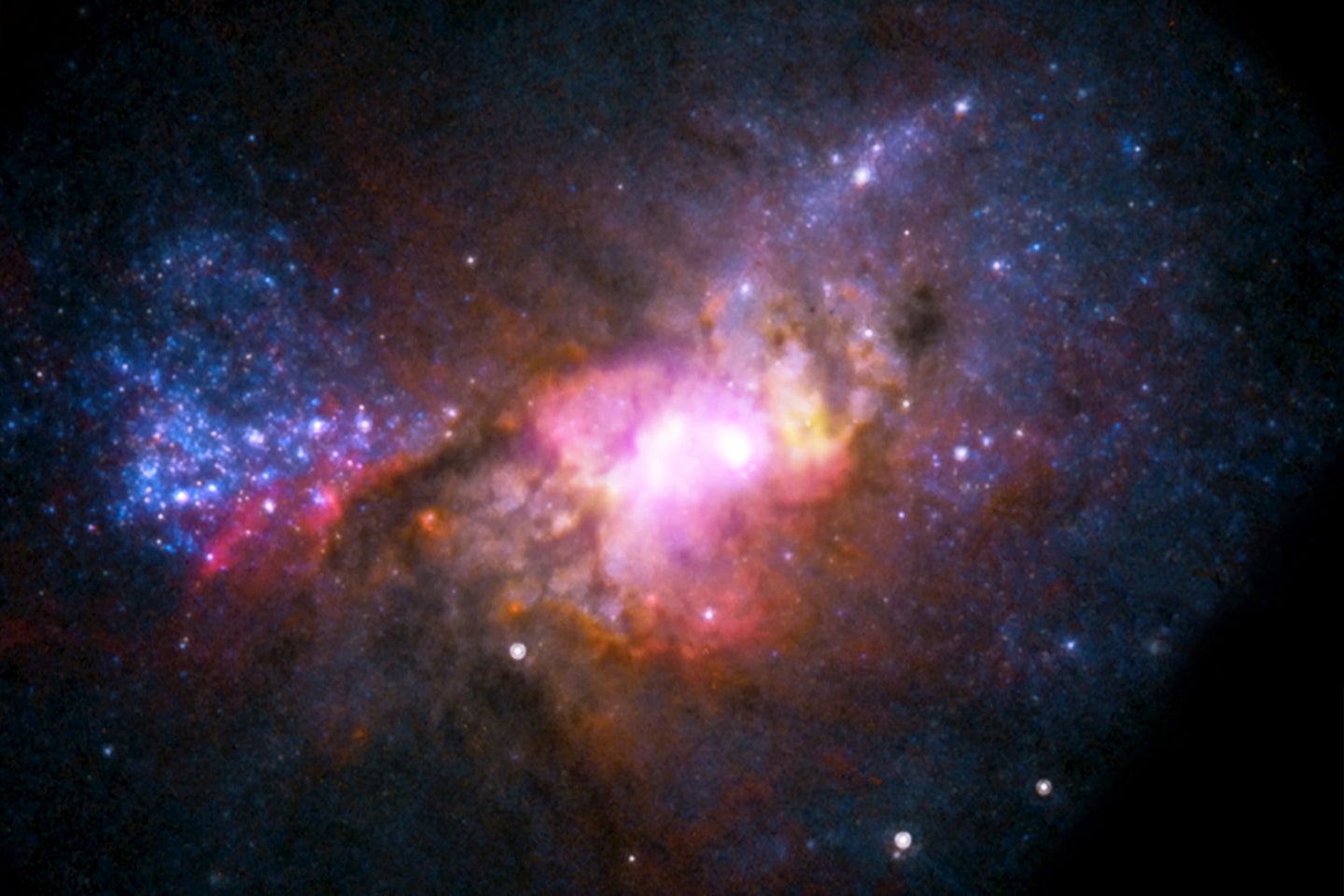 When Amy Reines first saw snapshots of the Henize 2-10 dwarf starburst galaxy in the late 2000s, she was struck by how different it looked from the rest of its peers. A 500-light-year-long gaseous filament stretched across the inky expanse, bridging two dust lobes where new stars were coalescing into existence. She was looking at a prolific stellar nursery, hence the term “starburst.”

After years of intermittent study on this singular galaxy system, Reines, now an astrophysicist at Montana State University, and her student, astrophysicist Zach Schutte, have uncovered why Henize looks the way it does: At the heart of Henize is a massive black hole that’s indirectly birthing stars. The results are published Wednesday in the journal Nature.

It’s the first time researchers have shown clear signs of black holes triggering star formation in a galaxy as small as this one, says Fabio Pacucci, an astrophysicist at the Center for Astrophysics | Harvard & Smithsonian who wasn’t involved in the study. It had been a “very open question” whether black holes quench or trigger star formation, he adds.

Thanks to their incredible masses, black holes capture dust and the shredded remains of stars that wander too close. As the astronomical giants consume their victims, they may also eject some of the stellar fodder. “They [feed] on surrounding material, but they’re kind of messy about it,” says Reines.

Humankind’s telescopes can more easily detect the biggest, baddest black holes, because these black holes are also the brightest, limned by the falling gas and dust that heat up while spiraling towards their demise. Jets of material from the gravitational behemoths are also powerful enough to scatter matter and thin out surrounding clouds that would otherwise condense into stars. These more luminous black holes will quench star formation—and they’re usually the kind of black holes scientists can observe.

Enter dwarf galaxies, a class of small stellar congregations with—if any—punier black holes to match. Black holes nestled in dwarf galaxies are fainter, so they’re harder for scientists to detect. And the winds emerging from these modest black holes aren’t as violent, so instead of blowing the celestial detritus away, they compact it, like a blizzard that piles up snow drifts. These dense pockets of matter are fertile grounds for stellar creation.

If there was a dwarf galaxy ready to spill the secrets of its black hole to Earthlings, Henize 2-10 would be the one. Henize is a fortuitous choice for scientists to study because it’s close, only about 30 million light-years away. That’s “kind of in our backyard,” says Reines. This makes it as accessible of a dwarf-galaxy target as scientists can get. Using data from the Hubble Space Telescope, Reines and Schutte analyzed the light from Henize, homing in on the wavelengths that would hint at the presence of early star ingredients: hydrogen, oxygen, and sulfur. Not only was Henize’s black hole spewing these elements, but the winds were also pulsating in concert with the black hole’s spin.

This result confirmed that new stars were forming directly from the feasting black hole’s leftovers. “We basically see a little coherent, wobbly pattern in the doppler shifts,” says Schutte. “There’s a coherent outflow originating at the black hole and extending to the regions of star formation.”

The study “may actually drive follow-up observations in other similar galaxies” beyond Henize, says Roberto Maiolino, an astrophysicist at the University of Cambridge who didn’t participate in the research. Dwarf galaxies are the most abundant type of star systems, he says, so black-hole-generated star formation could be relatively common.

Furthermore, not only are dwarf galaxies the building blocks of larger stellar congregations, but they’re also thought to mirror the universe’s earliest star clusters. “These dwarf galaxies give us a local test bench to investigate the theories of early galaxy formation,” Maiolino says. To understand the secrets of dwarf galaxies may be to understand many other early and ongoing astronomical phenomena across the universe.

Reines is already on the chase—in the future, she plans to shift her focus to other black holes and dwarf galaxies beyond Henize. She says she’s answered her lingering questions about this star system that has captivated her for so long. Henize probably contains more mysteries for other astrophysicists to pursue, but “I feel pretty satisfied,” says Reines of her study. “This is closure for me, at least for now.”