Millions of invisible black holes float freely around our galaxy. Now astronomers think they can spot them. 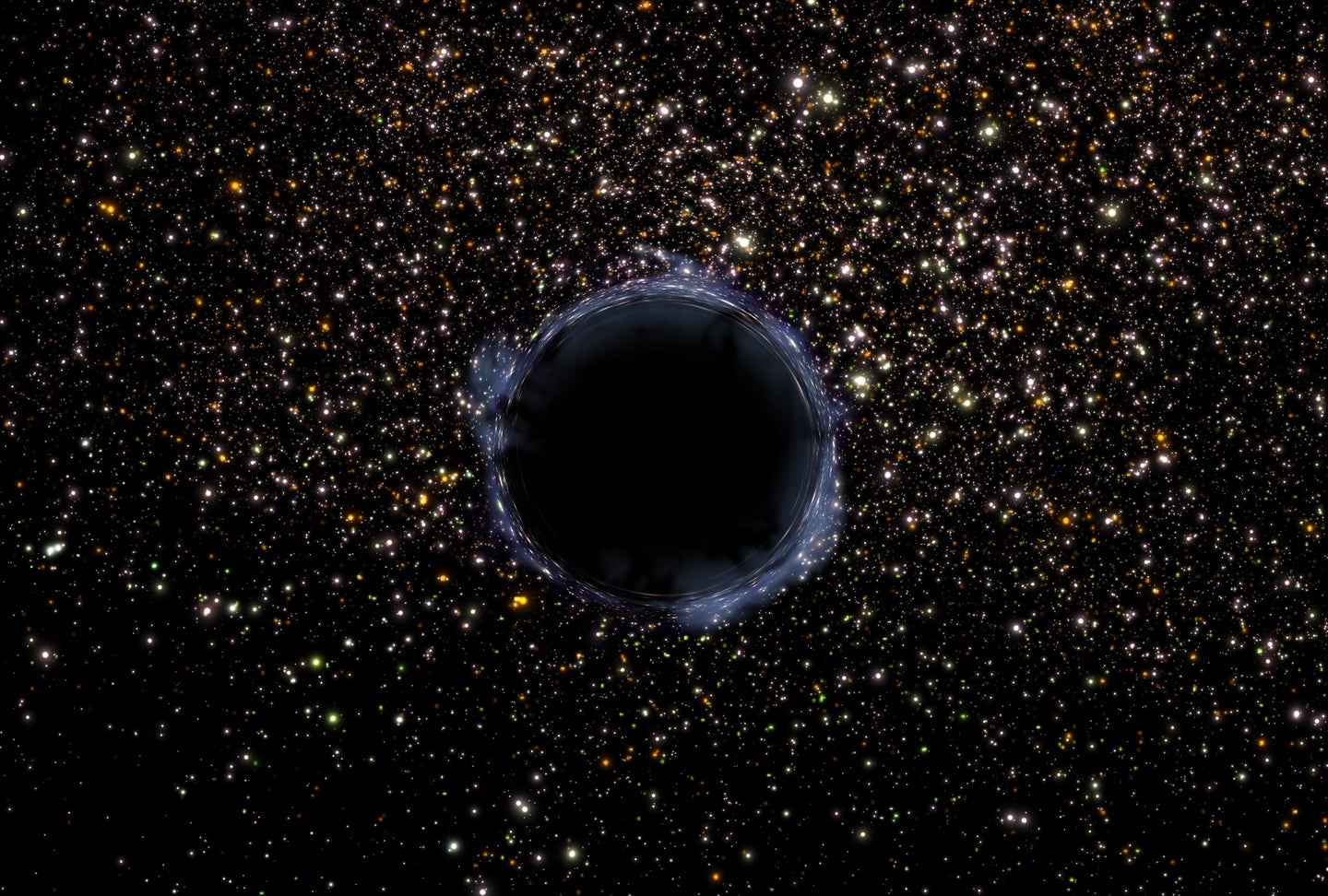 Hubble data from the Milky Way and other galaxies is helping astronomers get to the bottom of an otherwise invisible mystery. NASA/ESA and G. Bacon (STScI)
SHARE

When a star 20 times as massive as our sun dies, it can explode in a supernova and squeeze back down into a dense black hole (with gravity’s help). But that explosion is never perfectly symmetrical, so sometimes, the resulting black holes goes hurtling off into space. These wandering objects are often called “rogue black holes” because they float around freely, untethered by other celestial bodies.

But that name might be a “misnomer,” according to Jessica Lu, associate professor of astronomy at the University of California Berkeley. She prefers the term “free-floating” to describe these black holes. “Rogue,” she says, implies that the nomads are rare or unusual—or up to no good.

That’s certainly not the case. Astronomers estimate that there are as many as 100 million such black holes that roam around our galaxy. But because they’re solitary, they’re extremely difficult to find. Until recently, these so-called rogue black holes were only known through theory and calculations.

“They are ghosts, so to speak,” says Lu, who has made it her mission to find the Milky Way’s free-floating black holes.

Earlier this year, two teams of space researchers separately revealed detections of what just might be one of these roaming black holes. One of those teams was led by Casey Lam, a graduate student in Lu’s lab. The other was led by Kailash C. Sahu, an astronomer at the Space Telescope Science Institute. Both teams posted their papers on an open-access website without expert review.

The scientists will get more data from the Hubble Space Telescope in October that Lu says should help “resolve the mystery of whether this is a black hole or a neutron star.” “There’s still a lot of uncertainty about how stars die and the ghost remnants that they leave behind,” she notes. When stars much more massive than our sun run out of nuclear fuel, they’re thought to collapse into either a black hole or a neutron star. “But we don’t know exactly which ones die and turn into neutron stars or die and turn into black holes,” adds Lu. “We don’t know when a black hole is born and a star dies, is there a violent supernova explosion? Or does it directly collapse into a black hole and maybe just give a little burp?”

With star stuff making up everything we know in the world, understanding the afterlife of stars is key to understanding how we, ourselves, came to be.

How to spot a black hole on the loose

Black holes are inherently invisible. They trap all light that they encounter, therefore there’s nothing for the human eye to perceive. So astronomers have to get creative to detect these dense, dark objects.

Typically, they look for anomalies in gas, dust, stars, and other material that might be caused by the intensely strong gravity of a black hole. If a black hole is tearing material away from another celestial body, the resulting disk of debris that surrounds the black hole can be brightly visible. (That’s how astronomers took the first direct image of one in 2019 and an image of the black hole at the center of the Milky Way earlier this year.)

But if a black hole is not inflicting chaos with its gravitational force, there’s hardly anything to detect. That’s often the case with these moving black holes. So astronomers like Lu use another technique called astrometric or gravitational microlensing.

“What we do is we wait for the chance alignment of one of these free-floating black holes and a background star,” Lu explains. “When the two align, the light from the background star is warped by the gravity of the black hole [in front of it]. It shows up as a brightening of the star [in the astronomical data]. It also makes it take a little jaunt in the sky, a little wobble, so to speak.”

The background star doesn’t actually move—rather, it appears to shift off its course when the black hole or another compact object passes in front of it. That’s because the gravity of the black hole warps the fabric of spacetime, according to Albert Einstein’s General Theory of Relativity, which alters the starlight.

Astronomers use microlensing to study all kinds of temporary phenomena in the universe, from supernovae to exoplanets transiting around their stars. But it’s tricky to do with ground-based telescopes, as the Earth’s atmosphere can blur the images.

“In astrometry, you’re trying to measure the position of something very precisely, and you need very sharp images,” Lu explains. So astronomers rely on telescopes in space, like Hubble, and a couple of ground-based instruments that have sophisticated systems to adapt for the atmospheric interference. “There are really only three facilities in the world that can make this astrometric measurement,” Lu says. “We’re working right at the cutting edge of what our technology can do today.”

It was that brightening, or a “gravitational lensing event” as Lu calls it, that both her and Sahu’s teams spotted in data from the Hubble Space Telescope in 2011. Something, they surmised, must be passing in front of that star.

Figuring out what caused the wobble and change of intensity in a star’s light requires two measurements: brightness and position. Astronomers observe that same spot in the sky over time to see how the light changes as the object passes in front of the star. This gives them the data they need to calculate the mass of that object, which in turn determines whether it’s a black hole or a neutron star.

“We know the thing that’s doing the lensing is heavy. We know it’s heavier than your typical star. And we know that it’s dark,” Lu notes. “But we’re still a little uncertain about exactly how heavy and exactly how dark.” If it’s only a little bit heavy, say, one and a half times the mass of our sun, it might actually be a neutron star. But if it’s three to 10 times as massive as our sun, then it would be a black hole, Lu explains.

As the two teams gathered data from 2011 to 2017, their analyses revealed distinctly different masses for that compact object. Sahu’s team determined that the roaming object has a mass seven times that of our sun, which would put it squarely in black hole territory. But Lam and Lu’s team calculated it to be less massive, somewhere between 1.6 and 4.4 solar masses, which spans both possibilities.

The astronomers can’t be sure which calculation is correct until they get a chance to know just how bright the background star is normally and its position in the sky when something isn’t passing in front of it. They weren’t focused on that star before noticing its uncharacteristic brightness and wobble, so they’re just now getting the chance to make those baseline observations as the lensing effect has faded, Lu explains. Those observations will come from new Hubble data in the fall.

What they do know is that the object in question is in the Carina-Sagittarius spiral arm of the Milky Way galaxy, and is currently about 5,000 light years away from Earth. This detection also suggests that the nearest roaming black hole to could be less than 100 light years away, Lu says. But that’s not reason for concern.

“Black holes are a drain. If you get close enough, they will consume you,” Lu points out. “But you have to get very close, much closer than I think we typically picture.” The boundary around a black hole marking the line where light can still escape its gravity, called the event horizon, typically has a radius of under 20 miles.

Regardless of whether the first teams detected a roaming black hole or a neutron star, Lu says, “the real revolution that these two papers are showing is that we can now find these black holes using a combination of brightness and position measurements.” This opens the door to discoveries of more light-capturing nomads, especially as new telescopes come online, including the Vera C. Rubin Observatory currently under construction in Chile and the Nancy Grace Roman Space Telescope scheduled to launch later this decade.

The way Lu sees it, “the next chapter of black hole studies in our galaxy has already begun.”