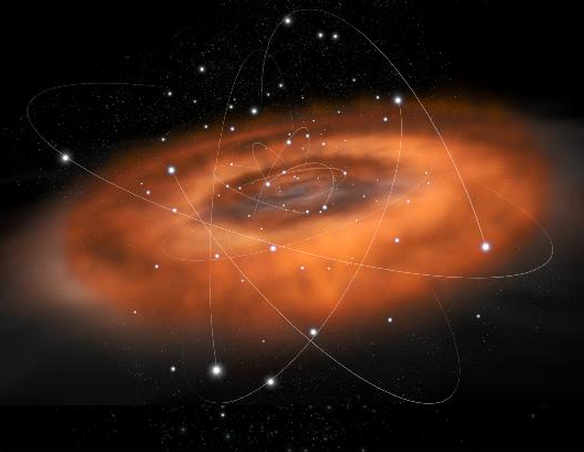 Later this year, the supermassive black hole at the center of the Milky Way will dine on a small passing cloud of gas, which wandered too close and is now spiraling toward the black hole’s maw. But that may only be a first course, according to new observations.

The Herschel space telescope spotted a vast amount of surprisingly hot molecular gas near the galactic center. It might be falling in towards the black hole, or just orbiting it. The black hole is located near a radio source called Sagittarius A*, or Sgr A*, so sometimes the black hole is referenced with that name.

Herschel could see it because its far-infrared eyes can peer through the dust between us and the black hole. Scientists working with Herschel saw several types of gas molecules at the Milky Way’s heart, and found it is extremely hot, around 1,000ºC or 1,823ºF. By contrast, typical interstellar clouds are usually only a tad warmer than absolute zero. Astronomers think the gas might be hot because of shockwaves from magnetized gas, and from ultraviolet radiation streaming from the stars that live near the galactic center.

Meawhile, this superhot gas may be speeding toward Sgr A*, according to Javier Goicoechea of the Centro de Astrobiología in Spain and lead author of a new paper reporting the results.

“Our Galaxy’s black hole may be cooking its dinner right in front of Herschel’s eyes,” he said in a statement.

The findings are a step toward understanding the mechanics of a supermassive black hole, and it just happens to be the one in our cosmic backyard. The paper is scheduled for publication in Astrophysical Journal Letters. 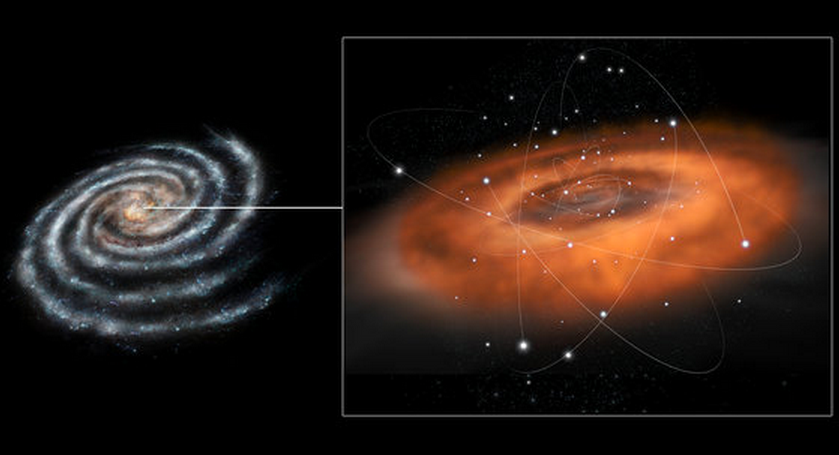 Gas Falling Into Sgr A*

The center of the Milky Way hosts a supermassive black hole known as Sagittarius A*, or Sgr A*, with a mass of about four million times that of our Sun.
milky way galaxy
Telescopes