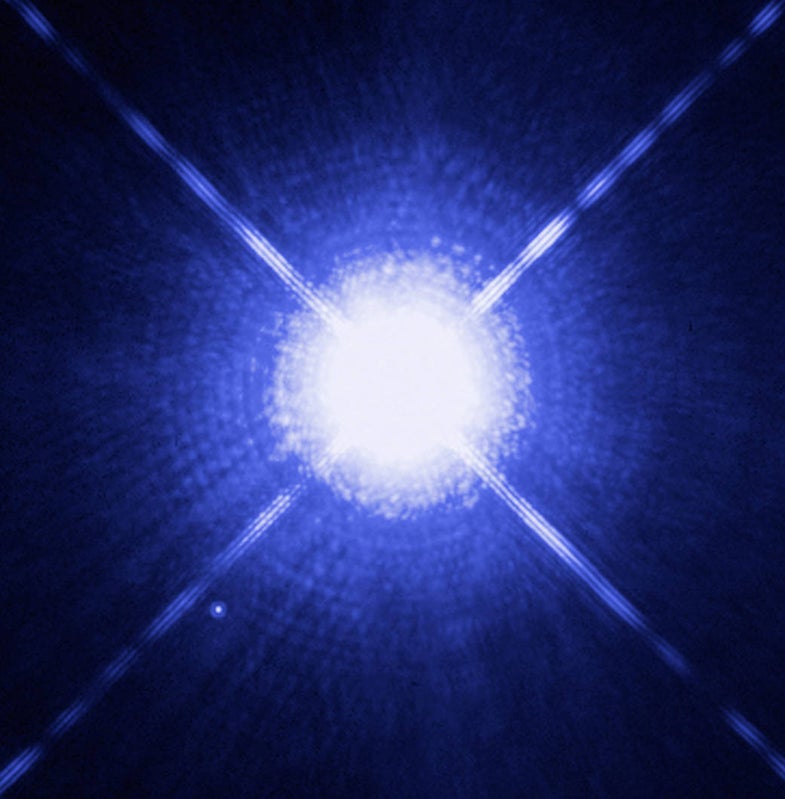 When our sun one day exhausts all its fuel and sloughs off its outer layers, the cooling ember of its core will end up as a white dwarf, a fate that more than 97 percent of all stars in our galaxy will share. These dim, fading stellar centers pack about 40 to 90 percent of the mass of our sun into an Earth-size ball.

These bright tombstones are common throughout the universe, but astrophysicists still have a lot to learn about their formation. Now, a study recently submitted to the Monthly Notices of the Royal Astronomical Society: Letters finds that roughly one in 10 white dwarf stars may actually be the result of two white dwarf stars that slammed into one another.

Previous research analyzed the roughly 100 white dwarfs within about 65 light years of the Sun and found that only about a quarter of them were paired up in binary systems. In contrast, 50 percent of regular “main-sequence” stars are in binary systems. Since main-sequence stars (small stars like our sun) are precursors to white dwarfs, the two ratios should have been roughly the same. The anomaly between the two suggested that some white dwarfs in binary systems might collide with one another to merge into a single larger white dwarf, says study lead author Mukremin Kilic, an astrophysicist at the University of Oklahoma.

To explore this possibility, Kilic and his colleagues examined data from the European Space Agency’s Gaia space observatory to analyze nearly 14,000 white dwarfs within about 325 light years of the sun. The color and brightness of the dead stars helped the scientists estimate their masses.

The researchers found that a significant fraction of these white dwarfs were heavier than one would expect, given the range of masses of the regular stars in the same area they likely evolved from. This suggested that “many of them must have formed through mergers in previously binary systems—we estimate a merged fraction of about 11 percent,” Kilic said.

Kilic explained that this might happen when binary systems of main-sequence stars evolve into pairs of white dwarfs. As the dying stars lose their outer layers, the expanding hot gas may create a common envelope around the couple. This shroud may bring the white dwarfs closer together, helping explain why so many end up colliding. “Some of the simulations that we have run for a 10-billion-year-old galactic disk population shows that as many as 15 to 30 percent of binary main-sequence stars may lead to single white dwarfs that form as a result of mergers in a binary system,” Kilic said.

These wouldn’t be the first collisions in space leading to mergers of astronomical objects.. Binary main-sequence stars can merge to form unusually hot, bright stars known as blue stragglers, and gravitational-wave observatories recently witnessed mergers between pairs of black holes and pairs of neutron stars.

However, white-dwarf mergers may far outnumber these other kinds of mergers. Blue stragglers appear rare, and “white dwarfs outnumber black holes and neutron stars by orders of magnitude,” Kilic said.

These preliminary findings may confirm previous suggestions that a large number of white dwarfs form through collisions, said Stephane Vennes, an astrophysicist now retired from the Astronomical Institute of the Academy of Sciences of the Czech Republic, who did not take part in this research. However, more work examining all new data that Gaia captured on these white dwarfs to confirm whether they did actually form via mergers, he noted. “The merger process itself is not well understood, and it is unclear whether the merged object should retain all the original material,” Vennes said. “That is one aspect that will require much investigation.”

If two merging white dwarfs have a combined mass greater than 1.4 times the sun’s, they will explode, resulting in a type Ia supernova, “which we now detect daily,” Kilic said. He notes these new findings could help solve mysteries regarding how these catastrophic outbursts happen. Vennes agrees—”Theory still has a hard time coming up with a clean explosion for these mergers,” he says..