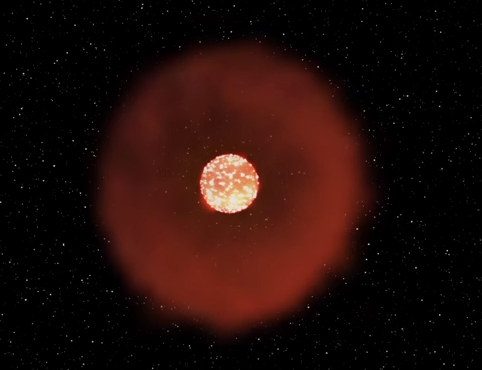 A supernova starting in a cocoon of gas. NASA
SHARE

It appeared as a flash of light on the arm of a distant spiral galaxy. It outshone neighboring stars, an attention-grabbing display of brilliance that peaked after 2.2 days in the sky. Then it was gone, dimming slowly into the background even as researchers raced to focus more telescopes on the ephemeral event.

It was too fast for a typical supernova, which tend to gradually build and recede as a star enters that last phase of its life, exploding in an astronomical fireworks show that can persist for months. Astronomers had noticed about a dozen other events like this in the past, a class of stellar phenomenon all their own: fast-evolving, luminous transients or FELTs.

No one was sure what they were. A star that tried and failed to go supernova would be fast, but also much fainter. The afterglow of a gamma ray burst? Possible, but gamma ray bursts are rare, and this didn’t quite fit. Two neutron stars slamming into each other? Also too faint. Something driven by a black hole drawing in surrounding matter? Possible, but the contortions to make the scenario fit the data made it unlikely.

Then, in 2015, the Kepler space telescope noticed this latest FELT on the arm of a distant galaxy. Snapping an image of that segment of the sky every 30 minutes, it provided a more detailed view of the rapid rise and fall of the FELT than had been seen before.

Scientists published those observations in a Nature Astronomy study this week, and think they might know at least part of the mechanism behind the phenomenon. It was a supernova, but one that had been hidden in a cocoon of gas for days before emerging—a dazzling, short-lived butterfly.

The star likely cast off its gaseous shell a few months to a year before its core exploded, explains Armin Rest, an astronomer at the Space Telescope Science Institute and lead author of the paper.

“The shell that gets ejected is normally the lighter elements like hydrogen and helium. It’s also relatively cool,” Rest says. “The ejecta from the supernova is more from the core of the star—it’s already richer in heavier elements. Then the supernova produces even more heavier elements, and heats it up by tens of thousands of degrees Kelvin.”

Ultimately, Rest explains, you wind up with really fast—and really hot—heavy elements slamming into relatively cool and light elements. The collision is violent and sudden, like a car hitting a wall. Light and heat rapidly spew out into space and then quickly die down, with the energy from the stellar vehicle sputtering out quickly after the collision.

The scenario matches the light curve Rest observed incredibly well. The cloud of gas initially hides the supernova’s light, so when the material from the stellar explosion finally meets the shell of its gassy cocoon, telescopes catch a sudden flash of light. But there isn’t much more material left of the star by that point, so it swiftly fades from view.

That doesn’t leave astronomers like Rest much time to focus powerful slow, ground-based telescopes on the event. Because of Kepler’s current requirements, items seen in the space telescope are only visible here on Earth for a few short hours every day.

The astronomers managed to get one good image of the supernova at its peak, but cloudy skies marred their view when they went back for another look the next night. “The next time we got images was 14 days later, and if you look at the light curve after 14 days it’s nearly gone,” Rest says.

That’s one of the hazards of studying FELTs. There are still plenty of unanswered questions about how they form, and a razor-thin timeline. Researchers are still trying to figure out what could possibly cause that eruption of gas from the star in the first place. The mechanisms behind these events remain elusive, but observations like this one can help pin them down.

“The beautiful thing with this event is that we have this extraordinarily light curve, and what that allows us to do is create a simulation, theoretical models, and we can predict what kind of light curve we will see,” Rest says.

He and his colleagues worked with collaborators in Berkeley to create those simulations. “Now we can constrain what kind of shell there is. How far away from the star is it? How thick is the shell? How much mass is in the shell? Having these parameters allows us to say, ‘ok, whatever event happened, it had to produce a light curve like that.’ In the future this will help us constrain the ‘burp,’ or eruption that actually caused the shell to be ejected.”

Astronomers will keep looking for events like this, using Kepler for as long as its fuel holds out and the next generation space telescope TESS after that. They’ve just got to watch the steady stars and galaxies and jump into action as soon as one of these explosions happens to intersect with their field of view—and hope for clear skies. They’ll only get the astronomical equivalent of a moment with it before it fades forever. Don’t blink.