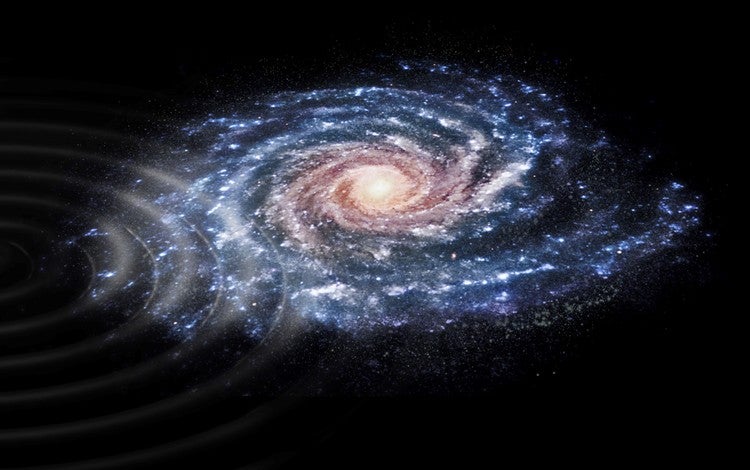 Our galaxy’s history was a lot more turbulent than previously thought. In a new paper published in Nature this week, astronomers found that hundreds of millions of years ago, the Milky Way experienced a near collision that churned the motions of millions of stars within its disk.

From our perspective here on Earth, the Milky Way looks like a bright streak of stars against the night sky. But its actual shape is a more complicated spiral, with curving arms reaching out in a disk around a bulging center. The majority of the Milky Way’s stars are located in this disk and not its central bulge. Astronomers generally assumed the disk’s stars moved in a relatively boring, symmetrical manner around the galactic core, having long-since settled into a composed equilibrium in the more than 13 billion years since the galaxy was born.

To learn more about the origin, evolution and structure of the Milky Way, the European Space Agency’s Gaia space observatory is creating a 3-D map of more than a billion stars across the galaxy with unprecedented precision. In the new study, scientists focused on the positions and velocities of six million stars.

The researchers unexpectedly detected a snail-shell-like spiral pattern in the motions of those stars. Where other stars in the galaxy have relatively staid patterns of movement, these were disrupted, like motes of dust caught in a sudden breath of air. “At first we thought there was some problem in the data, so we spent quite a bit of time to check if it was real,” said study lead author Teresa Antoja, an astrophysicist at the University of Barcelona in Spain.

Previous studies failed to see this pattern because they were less precise and looked at fewer stars. “Although these results are stunning, it’s a very small effect they have found,” said astrophysicist Kathryn Johnston at Columbia University, who did not take part in this research. “It’s a testament to Gaia’s amazing data that we can see anything at all.”

These new findings suggest this pattern started between 300 million and 900 million years ago, when prior work found the Milky Way had a close encounter with the orbiting Sagittarius dwarf galaxy. “By looking at the velocities of stars that we measured today, we can travel to the past of our galaxy and see the perturbation of our galaxy quite strongly,” Antoja said.

The Sagittarius dwarf galaxy possesses a few dozen million stars (the Milky Way has 100 billion to 400 billion) and is currently getting cannibalized by our galaxy. Its last close pass with the Milky Way would have gravitationally tugged at our galaxy’s stars. “We already had hints that dwarf galaxies orbiting around our own galaxy had an influence on our own galaxy, but I think this is the clearest evidence yet that this influence can be quite strong,” Antoja said.

“We tend to think of the galaxy as having a relatively quiet history,” Johnston added. “What these results are showing us more about its history of interactions, which may help us understand more about galaxies as a whole.”

Much remains unknown about this ancient close encounter. “We don’t know which parts of the galaxy were most affected, or if the sun was also affected by this perturbation,” Antoja said.

Future research into this spiral pattern might also help shed light on hidden aspects of the Milky Way, said astrophysicist Lawrence Widrow at Queens University in Kingston, Canada, who did not participate in this study. For instance, this spiral pattern is supposed to evolve over time, becoming more curled in the future and being less curled in the past, and examining the rate at which this spiral curled may shed light on the gravitational field of the Milky Way. This in turn can help yield insights on its mass, which can reveal details about the nature of its invisible halo of dark matter, he said.