What Escapes A Black Hole? 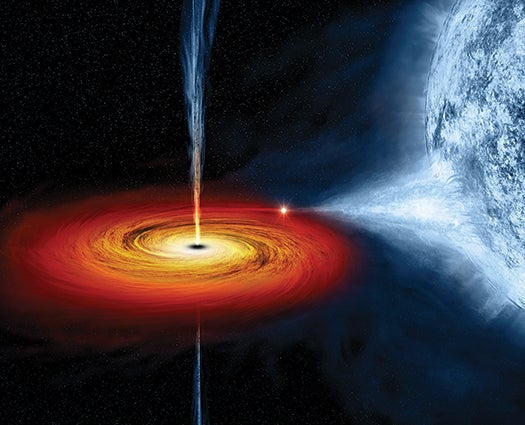 An illustration of a black hole pulling gas and plasma from a nearby star. Illustration by M.Weiss/NASA/CXC
SHARE

Black holes have a bad rap. They’re known for sucking in everything around them, but matter can actually break away from their grasp, in the form of jets. Although astronomers have been aware of this for half a century, they didn’t know what exactly the jets were made of until last fall. After observing a black hole in the Milky Way estimated to be 10 times the mass of our sun, an international team of astrophysicists discovered that the jets are composed primarily of electrons and atomic nuclei, including those from heavy metals, such as iron and nickel. With heavier nuclei, the jets carry large amounts of mass and energy from the black hole into space. In some cases, they’re so powerful that they can create shock waves that collapse surrounding gas clouds—triggering the birth of new stars.