Colliding Black Holes May Disrupt The Space-Time Continuum In 100,000 Years

But it won’t be the end of the world--not ours, anyway 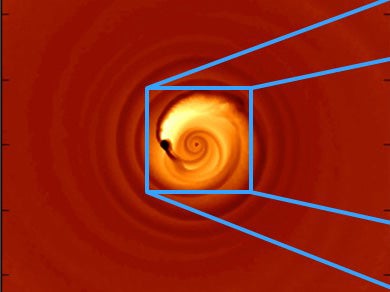 Illustration of two black holes orbiting each other

Talk about a fatal attraction. In a galaxy far, far away, two black holes are dancing around each other, drawn together by each others’ immense gravity. Eventually the two may collide, triggering a blast with the power of 100 million star explosions.

That won’t happen for at least 100,000 years, and its effect on Earth will be subtle. The black hole duo is located about 3.5 billion light-years away, but the encounter will send out ripples in the space-time continuum that will allow scientists to better study the theory of general relativity.

A paper in Nature today provides new evidence that the two black holes in the quasar PG 1302-102 may indeed be merging. (One of the paper’s authors, Zoltain Haiman, was named one of Popular Science‘s Brilliant 10 in 2002.)

The scientists found that the black holes at the heart of PG 1302-102 are closer together than any other known pair of black holes. They are separated by a space about the size of our solar system—a stone’s throw, cosmologically speaking.

Most galaxies have a black hole at their centers, and when two galaxies merge, the two black holes tend to orbit each other. That’s how PG 1302-102’s black holes met. But under normal circumstances, the two holes generally don’t get close enough to collide.

If these two black holes really are on a collision course, it’s going to make for a great show. Not only will they blow away nearby stars, but they could emit gravitational waves—ripples in space-time that Einstein predicted 100 years ago but have never been proven to exist.

If you’re not willing to wait 100,000 years to watch two black holes crash into each other, there’s hope: the study authors think their technique could help to locate other colliding black holes.