With the arrival of Africa’s next radio telescope, Namibia sees a new dawn in astronomy

The upcoming addition to the Event Horizon Telescope network will unlock cosmic secrets—and new doors for the next generation of Southern African astronomers. 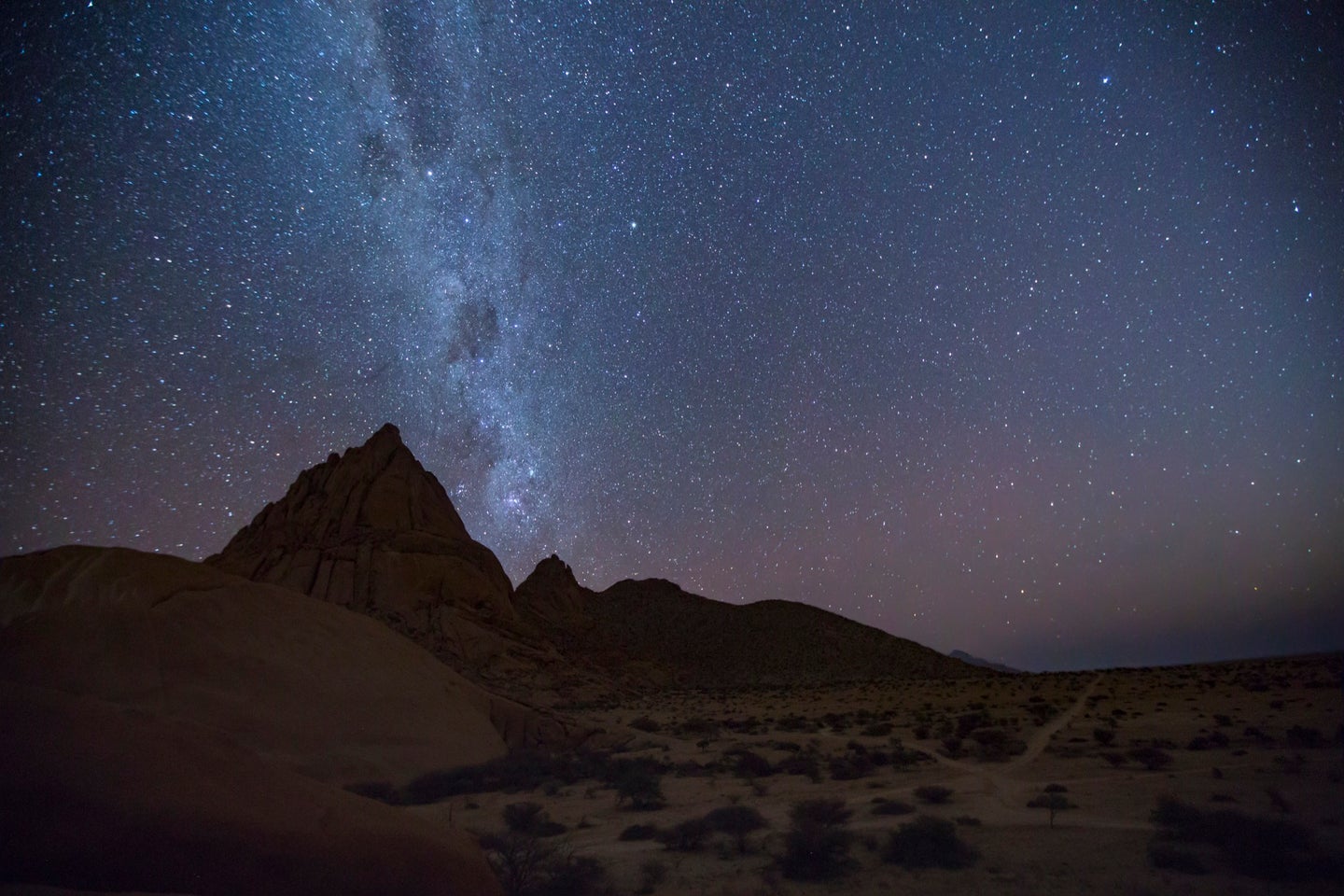 When the sun dips below the horizon in South Africa, the Namibian desert is plunged into a cold darkness. This stretch of sky is free from frequent cloudy rain storms and the obstructive glow of city-light pollution. On moonless nights, stars are the only source of illumination—dotting the sky’s black canvas like precious, glittering jewels. This clear, adumbral sky is an astronomer’s paradise.

“Africa is a beautiful continent,” says Susan Murabana, a science educator based in Kenya. “We are privileged to have dark and unpolluted skies.”

Native Africans have long relied on the position of stars and planets to log time and seasons, and shape society and ideologies. Many of the mathematical elements that make up their cultures have since been recognized in other myths, legends, and societies around the world. But the larger space community is only now catching on.

Over the last few decades, Africa has become a prime location for world-class telescopes that have helped to fuel a local astronomy renaissance. Today, there are 36 observatories across the continent. That includes the High Energy Stereoscopic System (HESS) in Namibia’s high plateau Khomas region, which looks for traces of cosmic rays from supernova and pulsar wind nebulae. Meanwhile, in the arid desert Karoo region of Northern Cape, the South African Large Telescope (SALT) tracks galaxies and quasars.

The next observatory to join the ranks is Africa’s first millimeter telescope, also called the Africa Millimeter Telescope or AMT, which will use radio waves to detect objects in the darkest parts of the cosmos. While revealing new secrets about the universe, the AMT could also open new opportunities to locals. Southern African scientists see the telescope as one step in a larger movement to grow a new generation of researchers and rebuild astronomy in the area.

“The AMT is a project that many of us on the African continent are excited about,” says Eli Kasai, the head of the Department of Physics, Chemistry and Material Science at the University of Namibia. “The change in the amount of local expertise in the field is another exciting development we look forward to as a university and a country.”

The AMT will be built on Mount Gamsberg, which is situated in a protected nature reserve in the southwestern country of Namibia. The remote location of the 7,700-foot plateaued summit is 77 miles from the country’s capital Windhoek, far enough from human activity and dense cities that fill night skies with light pollution. The area also gets few showers and even fewer clouds throughout the year, giving it a unique geological and atmospheric advantage for celestial observations.

Scientists at the University of Namibia in Windhoek have partnered with the Radboud University Nijmegen in the Netherlands to complete the estimated $25-million project, and plan to start operations in about five years. Once online, the nearly 50-foot telescope will participate in a multitude of experiments, such as tracing gas in the Milky Way to study the birth of stars, monitoring faraway active galaxies, and collecting clues about the mysterious cosmic cannibals better known as black holes.

Astronomers have called the observatory a “missing link” for the future of black hole research, as the AMT will join the ranks of the Event Horizon Telescope (EHT) Collaboration, a global network of synchronized radio observatories aimed to explore the nature of these elusive entities.

Astronomers widely believe that supermassive black holes reside at the heart of many galaxies, including the Milky Way. The EHT piled on more strong evidence to this theory when it captured the first-ever picture of a black hole in 2019. Multiple patterns of light around the black hole at the center of the galaxy Messier 87 allowed researchers to measure and observe the basic properties of these celestial bodies, including its edge or the event horizon. This “point of no return” is a boundary where the velocity needed to escape its grasp exceeds the speed of light. Anything that passes this point is literally sucked out of the universe. To date, there is no human-made force as strong. While the image and data did shed light on these massive stellar maws, they also drummed up new questions about the intricacies of our universe.

“[The] next step of the EHT is literally to move from taking an image to taking a video of black holes,” says Michael Backes, an associate professor at the University of Namibia. But to do that, one thing was made painstakingly evident: More telescopes around the world were needed.

As of 2022, the EHT network is made up of 11 international telescopes, all of which work in some capacity to help study the physics of black holes. The network is mainly centered around the Americas, with the majority of telescopes residing in the Northern Hemisphere. An additional telescope in the Southern Hemisphere will allow for better communication and a broader data set between the rest of the telescopes. That’s where the AMT comes in: The new addition will be a significant boost to EHT’s coverage of the night sky.

Now, the AMT’s team is in the critical design review phase, which involves canvasing Mount Gamsberg to determine the exact site for the observatory. The foundation of the telescope will be refurbished from parts of the 2003 decommissioned Swedish-ESO Submillimetre Telescope, and enhanced with new technology to detect electromagnetic waves, specifically millimeter radio waves emitted from distant cosmic objects and activity. This will enable the single-dish radio telescope to observe characteristics such as the differences in the brightness of small and large black holes. While allowing for higher-quality images and videos of supermassive black holes, the AMT could increase the EHT’s overall observation time by about 30 percent, an uptick which could allow astronomers to continuously view the sky for longer periods.

A new avenue for African astronomers

Even as it shores up the EHT collaborators’ knowledge of the universe, most of the telescope’s time will actually be dedicated to helping local astronomers develop their own research. Southern African researchers hope that it will also provide opportunities for Namibia’s small, but growing astronomy community to thrive.

This isn’t the first time Namibia has kickstarted space research efforts: The country has a long history of drumming up interest and activity in local astronomy. In 2016, for instance, Namibian researchers helped prove the existence of a high-energy “trap” in the middle of the Milky Way consisting of concentrated cosmic rays—particles traveling through space almost as fast as the speed of light. But logistical and economic challenges have blocked the country from further expanding these scientific avenues.

“[Astronomy] can feel like a very distant science for a certain group of people or for certain parts of the world,” says Murabana.

As a little girl, Murabana had been enamored with astronomy, but her rural village in Kenya had few opportunities to get hands-on experience. She was 20 years old when she finally got the chance to look at the sky through a telescope. While younger generations might have an interest in space and astronomy, Murabana says, there are relatively speaking, few African resources and experts to encourage them to stay in the field.

In Namibia, a country with 2.5 million people, there are two public universities and one private institution serving approximately 60,000 students. The Namibia University of Science and Technology and University of Namibia offer undergraduate and graduate programs in physics and concentrations in astrophysics, while the private International University of Management does not offer any science degrees. According to Backes, Namibia does not have enough local astronomers at universities. He attributes some of it to low student numbers and a lack of funding opportunities, but says a larger part of the issue is how many promising Namibian students end up studying and then staying abroad. This “is a significant loss for the system” for a small country with a limited population in higher education, says Backes.

Scientists and community leaders like Backes and Murabana are leading efforts for local astronomy research to take root in places like Namibia and Kenya. For instance, Murabana now teaches kids through the Traveling Telescope, a mobile exhibit in Kenya that she founded to increase access to science and technology through astronomy. Murabana says that the rising interest in the space industry is especially promising for the next generation.

The AMT is at the center of this research movement, pushing the country to become a greater powerhouse in astronomical science. The project plans to have its own education and outreach program to encourage the next generation of Southern African astronomers and astrophysicists—part of which is already set in motion. In addition to supporting scholarships and fellowships, the AMT will boast a mobile planetarium, an inflatable dome where interactive images of the night sky can be projected. The electric-powered planetarium will visit schools all over Namibia. The dome will aim to give more than 150,000 children a glimpse of the universe at once, and train teachers about the program to ensure the lessons brought back to the classroom continue to stick in the years ahead.

“The goal is to pique the interest of such children not only in the field of astronomy, but in [all] STEM fields,” says Kasai. “This also increases the prospects of training more Namibians in the near future in astronomy to actively undertake research and collaborate with the rest of the global astronomy community.”

This global recognition could also bring an influx of researchers and funding from abroad, giving the local scientific community international support. And while the continent has already improved its relationships with many international institutions and research groups, some in the community think African nations must come together to encourage interest in the sciences. As more people recognize the importance of satellite technology, rocket engineering, launches, and all aspects of space exploration, Murabana believes it’s an exciting time not just for astronomy, but for science in Africa to bloom.

“I think everyone loves science and everybody’s a scientist, irrespective of where they come from,” she says. “It’s just our time as Africans to produce more scientists.”