The truth about Area 51 UFO sightings, according to a local expert

Decades of government secrecy have led to a rash of extraterrestrial reports in Nevada. Author Sarah Scoles set out to see for herself. 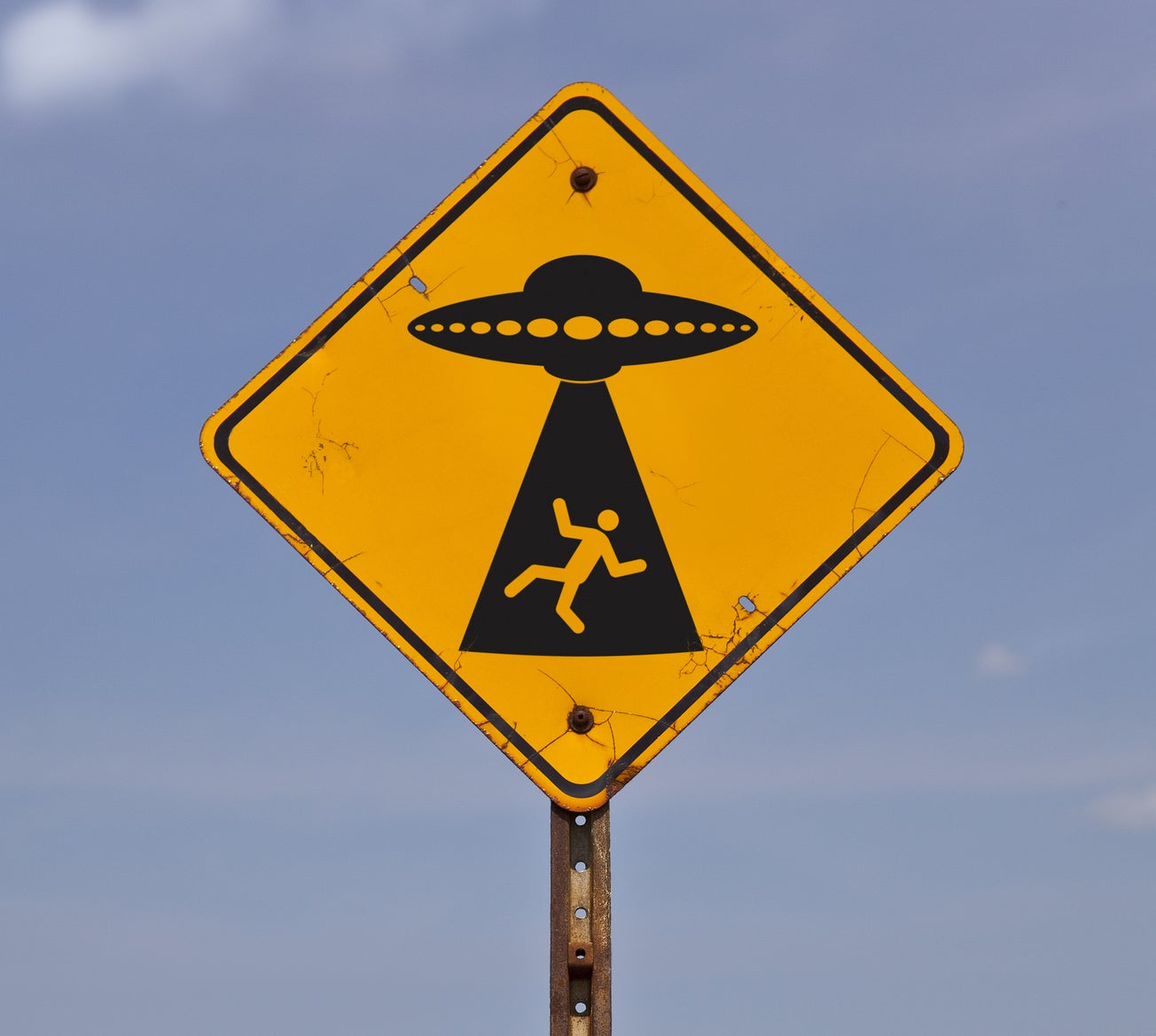 Reprinted with permission from They Are Already Here: UFO Culture and Why We See Saucers by Sarah Scoles. Published by Pegasus Books. © Sarah Scoles.

Arnu arrives at the A’Le’Inn in a big SUV, pulling up and saying hi to the hungover twentysomethings rocking in rocking chairs out front before he greets us.

“You ready?” he asks, and we pack into his Tahoe and head right back out on the Extraterrestrial Highway.

Arnu has owned property in Rachel since the early 2000s. Back in its boom, when the tungsten mine near Tempiute Mountain was still digging wealth out of the planet, around 500 people lived here. Today, it’s a small town—just around fifty residents, who meet up at the collective mailbox when the Postal Service arrives. Young people, Arnu says, tend to leave. There’s no TV reception. There’s just a squeak of cell phone service. Few places exist to build a career, none to go to college. Some people work at what they simply call “the test site,” an umbrella term that could refer to any of the secret-squirrel operations nearby—the Nevada National Security Site, the Tonopah Test Range, or Area 51.

Around ten people also work at the A’Le’Inn, by far Rachel’s biggest employer. They’re always hiring, because people are always leaving. But people are always showing up, too. “Sometimes they come up here because they are interested in Area 51,” says Arnu, “and they just get stuck.”

That’s what happened to Arnu, decades ago now. It all started with online research into Area 51, reading a website run by a former programmer and airline worker named Glenn Campbell. In the 1990s, Campbell ran the Area 51 Research Center and two UFO newsletters—The Groom Lake Desert Rat and the just plain Desert Rat. The newsletter logo featured a sentient rodent with safari shirt, walkie-talkie, and binoculars, underneath the tagline “The Naked Truth from Open Sources.”

Recalling this, Arnu speeds along the straight road. “He was one of the first that brought the attention of the general public,” he says. But Campbell was mysterious, evasive. “I wanted to know what’s really going on here. Are there UFOs are there no UFOs?”

So Arnu took a day trip, traveling from his home in San Francisco. And when he arrived, he found a place that was fascinating as much for its terrestrial qualities as its celestial hypotheticals. “I had never really experienced the desert in this way,” he says. “And it was just like, ‘Oh my God, this is a whole different world.’ ”

He thought of it, thinks of it now, in terms of motorcycle trips—a hobby of his that he just calls “riding.” “It’s always my thing: I want to see what’s behind the next turn, the next hill,” he says. And despite how this highway feels—unchanging, flat, forever—if you veer from it, turns and hills and the secrets behind them abound.

Arnu went back home knowing he would return. The presence of the place loomed over him, shook him. Soon enough, the labor market gave him a chance: His company downsized, so he took a severance package and car-camped around Rachel.

Soon after that, Arnu started his own website, mostly a blog detailing his daily exploits: As he summarizes it, Today I went out to this gate, this is what I found, check out my pictures. More important than anything he wrote, though, were the comments sections.

“It’s like people were only waiting for a place to congregate,” he says. He soon started a forum—still going strong today—dedicated to such interaction. “We’re geeks,” he says. “We’re loners. But at the same time we also want to discuss what we do with like-minded people.”

He moved to Vegas in 2002 and then bought the property in Rachel, working remotely a lot so he could spend a week at a time in the remote desert.

“And here I am,” he says. “Years later. Still unraveling the mystery of Area 51.”

Arnu looks through the Tahoe’s windshield and points at a prominent peak ahead of us. If you can get to the top, you can see inside Area 51, which would then be 26 miles away. This high spot is the only one left with that view, the military having gobbled up all closer vantage points in a series of land grabs. Here’s what the base looks like from up there: Dark, if you’re doing it right, because the interesting stuff happens at night. But all of a sudden, way across the valley, a runway illuminates itself, a long line of lights dotting the landscape. “You know something is about to happen,” Arnu says. Aircraft bulbs streak along the runway, as a Whatever speeds to takeoff. And as soon as the Whatever is airborne, its lights blink out of existence, and so do the runway’s. The Earth becomes as optically opaque as it was before.

It’s not that they appear. It’s that they disappear.

Nevertheless, the base continues to give away information invisibly: Pilots talk on radios, and if the chatter is not so secret, you may be able to catch a monologue.

Arnu has a radio scanner, which he now turns on, mounted to the dash of his Tahoe. It runs through many Hertz in search of such communication. As the display rolls across frequencies, I prepare to tell Arnu about what we saw last night, feeling silly and like every other overexcitable person who’s ever visited the region.

I know from our prior emails that Arnu doesn’t ride the alien train. Sure, creepy stuff happens here. Sure, there are strange lights, technologies we can barely fathom. But they don’t require invocation of the extraterrestrial: They’re just the government, doing things the world isn’t privy to—the growing up of projects perhaps born classified, just like it always has here.

That started with the U-2, which flew twice as high as a commercial jet, and much higher than anything else at the time. Workers commuted daily on passenger jets—a secret service people call, in its modern incarnation, “Janet airlines”—partly so that permanent residences would not reveal the scale of efforts here. U-2 pilots, though they worked for the CIA, wore civilian clothes and pretended to do weather-related research, according to the book Area 51 by investigative journalist Annie Jacobsen.

Later, Area 51 hosted the Oxcart spy plane project, the U-2 successor that also flew close to the sun but showed up dimmer on radar. Jacobsen writes that FAA and NORAD employees were instructed “not to ask questions about anything flying over 40,000 feet.” And when commercial flights crossed paths with an Oxcart, and a pilot did report it, the FBI would meet the plane at the gate, asking passengers to sign nondisclosure agreements.

Around the country, people nonetheless spotted spy planes and reported them as UFOs. Says a CIA report from 1997, “Over half of all UFO reports from the late 1950s through the 1960s were accounted for by manned reconnaissance flights (namely the U-2) over the United States.” Many, including UFO skeptics, dispute this take, but it doesn’t seem absurd that the government would use UFO reports to understand how conspicuous its technology would look in less friendly skies. And it doesn’t actually want people to see skylights and think “spy planes.” So it is sometimes in the feds’ best interest to let people attribute the phenomenon to something mysterious, unearthly, not them. And—bonus—because many people thought UFOs were woo-woo and not “real,” whoever heard about these UFO sightings would likely dismiss the very real U-2 or A-12 their kid had just seen. The government’s secrets could stay secret. If you wanted to create a theory about why the military hasn’t come out swinging against some of its pilots’ more modern sightings, you might consider this part of the past.

“ ‘Oh, well, these people just saw another UFO,’ ” mimics Arnu. “In actuality they may have seen something super-secret … If you make people look like fools when they say they saw something, if they say they saw something super secret, what better way to discredit them?” Given the government’s history of passive deception, and active secret-keeping, here, is it any surprise that people suspect it could be hiding something more inside Area 51?

But I want to know what Arnu, who sees this stuff every day, thinks of my sighting. So I describe the on-off lights, their hovering, and my theory that this was some kind of hide-and-seek exercise.

Arnu frowns in concentration. “Were the lights kind of orange?” he asks. “A bright orange color?”

“Yes!” says Carolyn from the backseat. Arnu nods and then goes on to describe exactly what we saw, detail for detail, as if he were there.

“That was flares you were seeing,” he says. A plane chases another plane, and the chaser sends off a (fake) heat-seeking missile. The chased plane drops flares, which burn so hot that they distract the missile, which then chases them instead of the jet’s exhaust. These planes drop flares in patterns—disc shapes, sometimes—to send the missiles clear off course.

Hearing this incident repeated back, with more meaning, makes me feel the way people do when they discover their seemingly singular experience is, in fact, universal: equal parts relieved and disappointed.

Arnu’s first UFO sighting, turns out, was also flares. He had been camping right where we did, in the gravel parking area. “I looked over Tikaboo,” he says, referring to one of the peaks, “and all of a sudden, I see this disc-shaped object of orange orbs hanging in the sky.”

It’s all true, he recalls thinking. They’re coming to get me.

But they weren’t and they didn’t. He was just primed: He thought he had witnessed a UFO because that’s what he expected to witness. “Your eyes see what you want them to see,” he says.

He then begins to talk about YouTube videos of cars disappearing on the Extraterrestrial Highway. They’re not disappearing, he says: They’re coming down from summits, hitting dips.

“We saw that!” I say, and describe how I scared ourselves into thinking that the guards had set a trap.

“That’s why I’m such a skeptic,” says Arnu. “Because I’ve seen it. And I know for a fact what they’re describing is very explainable.” Talking to Arnu feels like seeing a therapist who understands, even when you don’t, that your problems are all because of your mom.