Scientists found something surprising at the heart of these jellyfish galaxies 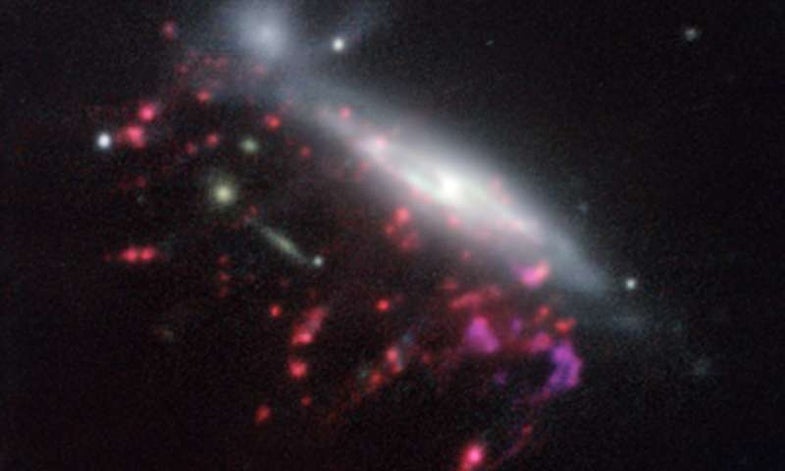 This picture of one of the galaxies from ESO's Very Large Telescope in Chile shows material streaming out in long tendrils to the lower-left. ESO/GASP Collaboration
SHARE

Our galaxy, the Milky Way, is a spiral, making its way through space with a classic, carefree pinwheel shape that we all know and love. Nothing wrong with that, spirals are great. But other galactic shapes are far more mysterious and intriguing to astronomers.

Take jellyfish galaxies, for example. They’ve got blobby bodies with long, tentacled arms of stars and gas trailing out behind them. Astronomers are pretty sure that jellyfish form when one cluster of galaxies slams into another. As stars collide with the gas that lies between galaxies within clusters, the force sends matter out in all directions. Super-hot, x-ray emitting gasses between the galaxies strip away stars and other gasses from inside, drawing them out into long, distinctive tentacles.

That violent pushing and stretching is called ram-pressure stripping. In a new paper published in Nature, an international team of scientists from research institutions in Italy, Australia, Chile, Vatican City, and the United States found that ram-pressure stripping might be responsible not only for the tentacles of jellyfish galaxies, but also for the formation of an incredibly luminous buildup of matter called an active galactic nuclei towards the center of the galaxy, near a supermassive black hole.

“We were not planning to study active galactic nuclei at all,” says Bianca Poggianti, lead author of the study and Research Director at the Astronomical Observatory of Padua. The team was working on a much larger project, using data collected from international observatories to study the evolution of galaxies—and in particular, how galaxies lose their gasses.

Gasses are critically important to a galaxy’s development. Every galaxy, Poggianti explains, has stars, gasses, and dark matter. “Gas is the key because it’s the fuel for new stars to form,” Poggianti says. Take away the gas, and soon your galaxy starts to change, age, and eventually fade. But the question of how galaxies pass their gas remains somewhat of a mystery.

But as Poggianti and her colleagues pulled together data on seven jellyfish galaxies with long, distinctive tentacles, they were surprised when they noticed that six of them had active galactic nuclei.

One hypothesis in the new paper says that the same ram pressure stripping that shoves gas out into long tentacles might also help form a glut of matter towards the center of the galaxy, with the intense pressures that peel off stars and gas also working to pile up parts of that galaxy towards the middle. Another variation on the hypothesis suggests that the ram-pressure works with the galaxy’s magnetic field to accumulate that matter towards the center.

As those gasses and matter build up around the pull of the black hole, they begin to tumble in, converting the matter’s gravitational energy into heat and light across all wavelengths of the spectrum. That creates a brilliantly bright, long-lasting signal that can be detected across the Universe—an active galactic nucleus.

These seven galaxies were just the start. The next step will be to figure out how this fits into the larger pattern of galaxy evolution. Poggianti and her colleagues are gathering data from an additional 107 galaxies at various stages of development to see how they change over time. In the end they’ll have 114 galaxies, and a more complete picture of a galaxy’s life cycle.