But our days of massive exoplanet dumps may be numbered. 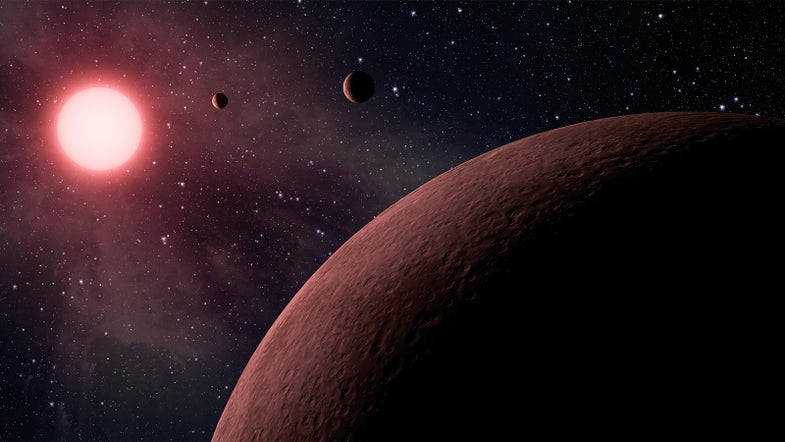 NASA's Kepler team spotted a bunch of new planet candidates, and a few might be habitable. NASA/JPL-Caltech
SHARE

It might seem like NASA is constantly announcing a brand-spanking-new “Earth-like” exoplanet—some far-away world that might possibly maybe have the basic requirements for life as we know it. And it seems that way because, well, that’s pretty accurate: it’s all thanks to NASA’s wildly successful Kepler Space Telescope, which uses the blinking and dimming of distant alien stars to spot planets that might orbit around them. But the latest Kepler finds (219 new planetary candidates, 10 of which are Earth-size and the right distance from their host star to hold liquid water) mark something of an end: this represents the final official planetary search results from Kepler’s mission data.

This requires a little bit of unpacking. After all, as you may know, the Kepler Space Telescope is still out there in space finding new planets—and will probably continue doing so for about another year. But the telescope’s primary mission ended prematurely when the darn thing broke in 2013: the telescope has four wheels meant to keep it pointed at one patch of sky so it can stare down any subtle star flickers indicating the presence of a plant. Then two of the wheels broke. Instead of giving up on the craft entirely, NASA engineers figured out how to use the sun as a virtual reaction wheel; the physical force of light pressing against Kepler’s solar panels keeps it in place as the other wheels push back. So Kepler had a second chance, with a new mission dubbed “K2“.

K2 has already found several exoplanets in its own right, but the mission is a little different. In its first mission, Kepler stared at one patch of sky, looking for signs of planetary activity around 150,000 stars in our cosmic backyard. K2 is subject to the sun’s position; it can’t just point anywhere scientists want to point it. And once they pick a target that works—one with stars worth looking at, but that’s in the right spot for the sun to give an assist—the team only has about 80 days before the telescope has to move again. K2 has spotted (and will continue to spot) new planets, but it doesn’t produce the glut of data that the original mission provided.

And that brings us back to NASA’s latest news: four years after Kepler’s hardware failure, the massive catalog of data it produced has finally been combed through to NASA’s satisfaction in its entirety.

“All the data from the original Kepler mission has been analyzed, much of it several times,” Kepler and K2 mission manager Charlie Sobeck told PopSci in an email. “This latest catalog is a reanalysis using improved software that has been well characterized, which makes the catalog particularly good for drawing statistical conclusions. This represents the final planet search results that the mission will deliver.”

The new data analysis brings the total number of planetary candidates (possible planets that haven’t necessarily been confirmed) to 4,034. Just over half of those have been verified using other telescopes. Of the 50 planets thought to be Earth-size and in their star’s habitable zone (10 of which were announced in the new batch) just 30 are confirmed.

The new findings also revealed something about the planetary family tree: in measuring the precise size of some of the Kepler planets, scientists determined that “small” planets (ones smaller than gas giants like Jupiter) fall into two clean-cut categories. They’re either relatively close to Earth-size (some so-called super-Earths) are several times more massive than our own planet, but that’s pretty close in the cosmic scheme of things) or they’re all the way over on the relatively-Neptune-like end of the spectrum, forming “gas dwarfs” or “mini-Neptunes”. The findings suggest that it’s relatively common for new planets to be close to Earth-size, but that some of them get a dose of gas that sends them sprinting into the heavier weight class.

“We like to think of this study as classifying planets in the same way that biologists identify new species of animals,” Benjamin Fulton, a doctoral candidate at the University of Hawaii in Mano, said in a statement. “Finding two distinct groups of exoplanets is like discovering mammals and lizards make up distinct branches of a family tree.”

Figuring out where Earth and its close cousins sit on the planetary spectrum can help us determine how planets tend to evolve—and by extension, how commonplace it is for them to evolve with all the components that make life possible on Earth. Kepler has done some amazing work in pushing planetary science forward. And even though it’s technically done with part one of its mission, chances are that scientists will continue to identify the odd planet now and then from its massive data set.

“I expect that the scientific community will continue to scour the data set for decades, finding new planets and new features of the stars themselves,” Sobeck said. “So you can expect to see future exoplanet announcements based on the data, but probably not from the mission itself.”