The biggest and baddest ground-based telescopes are on their way 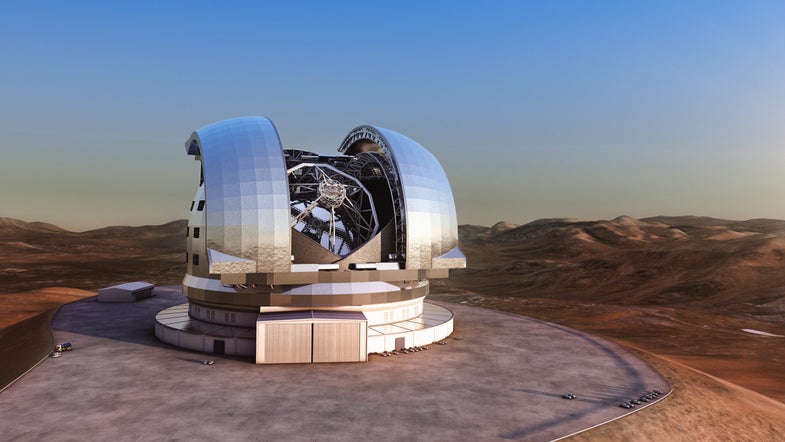 Location: Cerro Amazonas, Chile Groundbreaking: June 2014 Expected First Light: 2024 The aptly named E-ELT features the most traditional dome design of the three new telescopes. Although shaped like the Keck domes, it’s built with 10 times as much steel. A concrete base and thermal insulation will help keep the 8.8 million cubic feet of air inside it cool—essential for clear pictures just after sunset. Even with the insulation, the observatory’s air conditioners will require as much electricity as 1,600 homes. ESO/L. Calçada via Wikimedia Commons
SHARE

Astronomers recently held groundbreakings for three huge telescopes in five months, the first of which should begin observations by 2021. The scopes’ light-collecting mirrors—each 80 to 126 feet across—will dwarf those at the W.M. Keck Observatory, whose twin 33-foot mirrors are the benchmark today.

With telescopes this large, one challenge is to develop a design that swings easily across the sky and minimizes the atmosphere’s blurriness. Overcoming these hurdles, engineers have created observatories that will take pictures of the cosmos at resolutions 100 times higher than the current generation of telescopes. Astronomers will use them to study stars born just after the big bang, detect the expansion of the universe in more detail, and hunt for signs of life on planets around other stars. Even more tantalizing is the prospect of the unknown—the questions astronomers don’t yet know to ask but will inevitably stumble upon with new, more powerful tools.

In some ways, three groundbreakings in five months isn’t as surprising as it may seem: Over the past century, design leaps have occurred roughly every 30 years, so this crop is right on schedule. Gary Sanders, project manager for the new Thirty Meter Telescope, explains that three decades is simply the time it takes technology to advance enough to warrant new facilities. Upgraded capabilities come at a price; the observatories will cost more than $1 billion apiece and likely direct resources away from existing facilities, such as Keck. But Sanders is confident that astronomers will make good use of them. “There are only 365 nights in a year,” he says, “and a lot of questions to answer.”

“With each generation of new telescopes, we open up new things we never anticipated. It’s the serendipity that really drives the science.”

Eyes On The Skies

The size of a telescope’s primary mirror—the glass that concentrates light from the sky onto the detector—determines its observing power. Bigger mirrors make for finer-detailed images. Here’s how the next generation of mirrors stack up against Keck I and II.

Mirrors That Erase The Atmosphere

Adaptive optics (AO) systems—which compensate for the blurring effects of the atmosphere—were tacked on to the current generation of big telescopes years after they were built. In the new machines, AO is a standard feature. About 800 times per second, actuators adjust the curvature of a mirror in the telescope’s light path by a few microns. Luc Simard, the TMT’s lead instrumentalist, says AO will allow these observatories to take pictures 10 times clearer than Hubble, whose price tag was four times more than these billion-dollar scopes.

This article was originally published in the January 2015 issue of Popular Science, under the title “Colossal Scopes On The Horizon.” 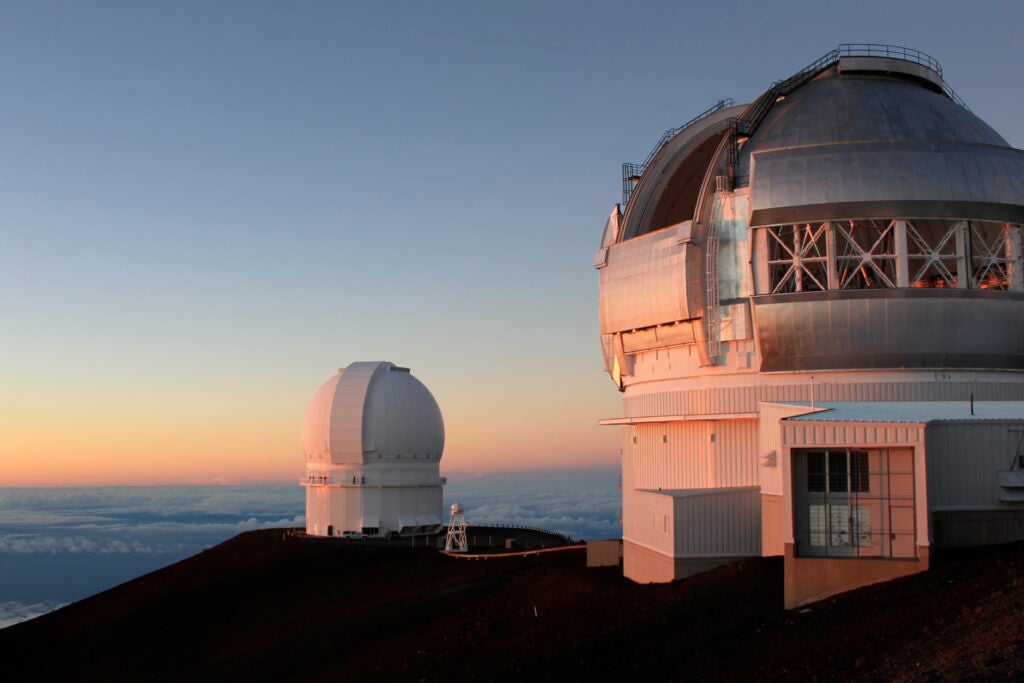 Location: Mauna Kea, Hawaii First Light: 1992 When it came online in 1992, Keck was twice the size of the biggest telescopes at the time. So many astronomers wanted to use it that the designers quickly built another nearly identical scope: Keck II, equipped with different instruments, which saw first light in 1996. Since then, the pair has yielded major discoveries, including dark energy, which won a 2011 Nobel Prize. 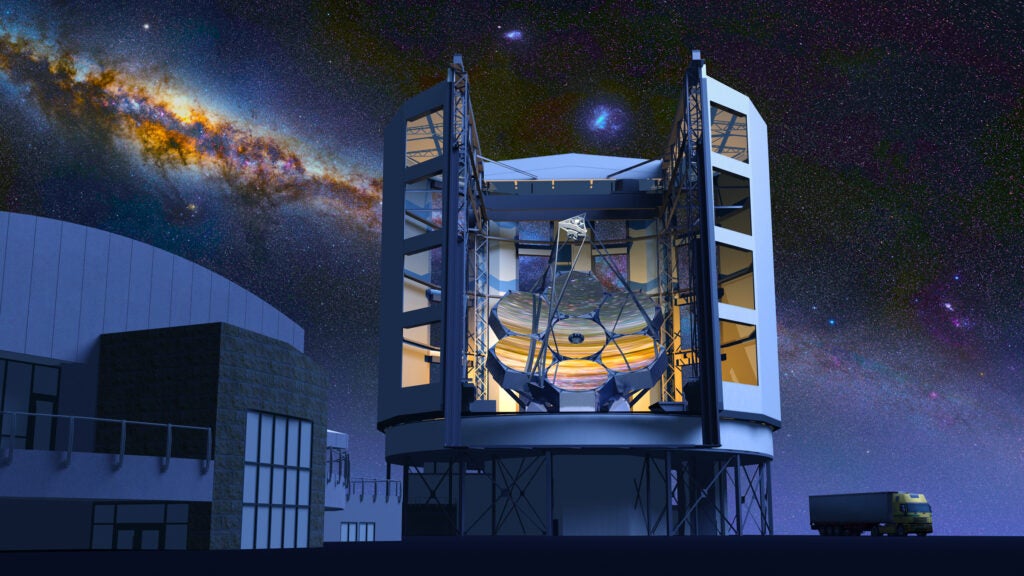 Location: Las Campanas, Chile Groundbreaking: November 2014 Expected First Light: 2021 The GMT’s engineers created a novel cylindrical carousel for the telescope’s dome. About 40 percent of the structure’s surface area is covered in vents. When they open at nightfall, the temperature inside the dome quickly drops to that of the outside air, preventing mismatched temperatures and the distorting turbulent air that comes with them. 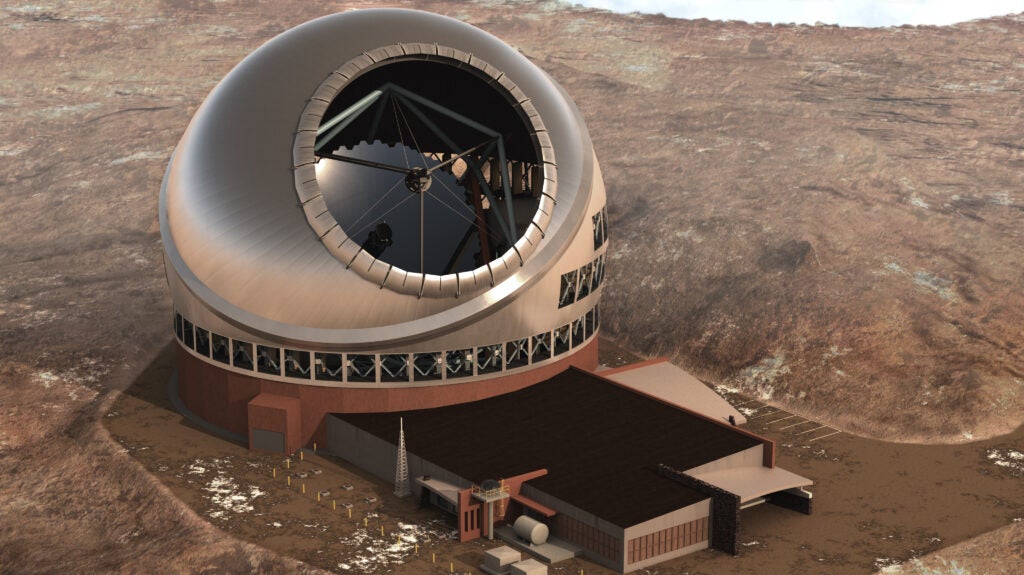 Location: Mauna Kea, Hawaii Groundbreaking: October 2014 Expected first light: 2023 From among three candidate designs, the TMT’s planners chose the most unconventional, with a circular opening that’s capped with aluminum during the day. The dome will consist of two nested rings that spin independently. The benefit? Speed. It can turn toward a star on the opposite side of the sky in just five minutes. 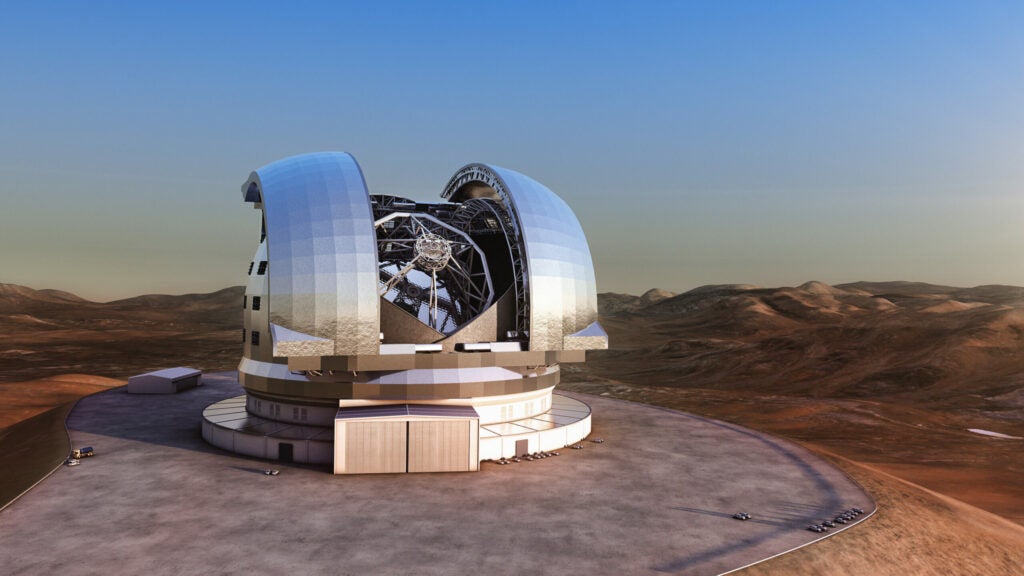 Location: Cerro Amazonas, Chile Groundbreaking: June 2014 Expected First Light: 2024 The aptly named E-ELT features the most traditional dome design of the three new telescopes. Although shaped like the Keck domes, it’s built with 10 times as much steel. A concrete base and thermal insulation will help keep the 8.8 million cubic feet of air inside it cool—essential for clear pictures just after sunset. Even with the insulation, the observatory’s air conditioners will require as much electricity as 1,600 homes.
Space
galleries