Researchers monitored microbes on a mock flight to Mars. 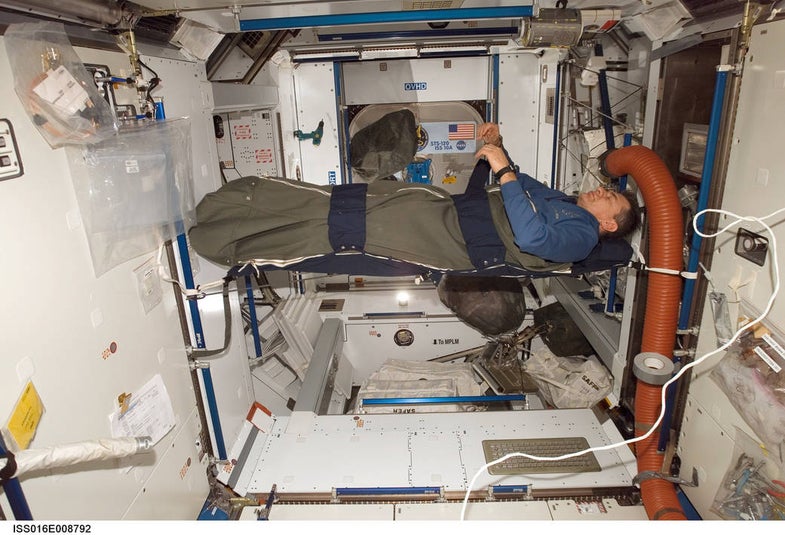 Space missions are meticulously planned. To ensure that nothing goes awry, the crew and those on the ground account for everything that enters and exits the craft. But there are a few stowaways they can’t control: the bacteria that astronauts bring with them. Though undetectable to the naked eye, these tiny organisms have the potential to wreak havoc on both human health and the functioning of a spacecraft—and scientists are beginning to understand the effects the bugs can have on long term space missions, including ones that could take us to Mars.

Humans have billions of bacteria living on their bodies at any given time, including the microbes in our guts and on our skin. But their presence is nothing to scoff at (or kill off) before a trip to space. Our microbiomes—the term for our collective conglomerate of bacteria and other bugs—are vital to human health. At the same time, their presence in a confined space and altered gravity can pose a risk to the flight crew and the equipment inside, especially on long-term space mission.

Researchers have been studying these microbes’ effects on short term space missions, as well as how they grow and thrive on the International Space Station (ISS). But until now, scientists haven’t looked deeply into their behavior on much longer outer space endeavors. In a study out this week in the journal Microbiome, researchers tracked the microbial diversity inside a mock-up spacecraft housing astronauts for 520 days: roughly the amount of time it should take us to get to Mars.

The project, called MICHA (Microbial ecology of confined habits and human health) was just one part of the Mars500 project, which tracked six crew members living in a confined “spacecraft.” The astronauts conducted science experiments, prepared and ate meals, and cleaned the cabin as they would during a real mission. They also collected samples of microbes from their skin and surfaces all around the spacecraft.

“Ours is the first comprehensive long-time study that investigates the microbial load, diversity, and dynamics in a closed habitat [for] the full duration of a simulated trip to Mars,” Petra Schwendner, an astrobiologist at the University of Edinburgh, said in a statement.

The researchers found that over the entire duration, the number of bacteria stayed within acceptable microbial limits set for the ISS. They also found that despite being contained in an environment entirely unlike Earth, the colonies of different bacteria strains stayed fairly dynamic, meaning that one type of bacteria didn’t end up taking over the entire area. However, they also found that the diversity of microbes decreased over time, meaning that there were fewer species at the end of the 520-day test mission than at the start.

That last finding is incredibly important. In general, microbes are most beneficial when they come in a diverse, evenly mixed bunch. For example, Streptococcus bacteria are present all over the human body, especially inside the nose. That’s generally not dangerous. But the microbes can cause dangerous staph infections if something allows them to outcompete other kinds of bacteria and flourish.

One of the biggest concerns on long-term space missions—or any multi-day trip to space—is that in a very confined space, bacteria might grow in ways that could turn infectious. And no one wants a staph infection while they’re floating in a tin can.

The researchers also note that spaceflight conditions (being confined in one particular area, stress, and altered physical conditions like microgravity, for example) can all affect the human immune system. “[They] can even cause an increased reactivation of latent viral infections, potentially making the human crew more susceptible to infections,” the authors write.

And humans aren’t the only ones at risk. Bacteria can grow uncontrollably on the surfaces and inside certain equipment on the spacecraft, too. When this happens the little bugs can form biofilms; thin, microscopic layers of bacteria that stubbornly stick to their surfaces. Once the growth gets going, it can actually cause damage to some kinds of metal equipment. According to the authors, such instances have been reported on historic space missions, and on the ISS.

There’s still a lot to learn about how our tiniest travelers will adapt to space travel. It’s likely that longterm spaceflight will require some kind of intervention, or at least close microbial monitoring, to keep things from getting out of hand. The goal, the researchers say, is to avoid any surprises.