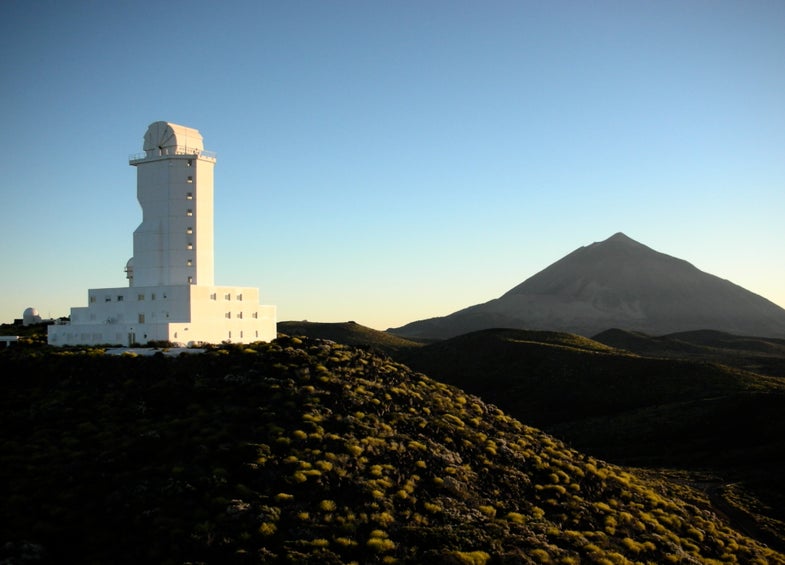 Anyone who has ever owned a telescope understands the feeling of anticipation that comes with a cloudless, moonless night. Whether it’s humid and mosquito-y or freezing cold, when the stars show themselves, you do what it takes to prepare for a night outside. What should I look for tonight? Maybe a nice globular cluster; maybe Jupiter at opposition, looking graceful through new color filters.

Now imagine answering these questions from home while commanding a 14-inch robotic telescope at Tenerife, in the remote Canary Islands. Where would you look? Francisco Sanchez, director of a new worldwide networked telescope project based in Spain, would like to hear your ideas.

Starting next year, the telescopes at Tenerife and 13 other institutions around the world will all be accessible online, free for anyone to log in and control. The GLORIA project, for “GLObal Robotic-telescopes Intelligent Array,” will encourage amateur astronomers to make new discoveries that will not only improve astronomy education, but answer new questions for research.

Gloria already has 13 partners, who together own 17 research telescopes that can be connected to the Internet. Sanchez hopes to have at least six or seven of them online by next year. His goal is to connect as many remotely-controlled scopes as he can — from university observatories to backyard installations. The $3.4 million (€2.5 million) project is slated to last three years, but could be extended.

A 10-inch Meade telescope at Spain’s Montegancedo Observatory serves as the project’s model. That open-access telescope, located at the Universidad Politécnica de Madrid’s Facultad de Informática, can already be remotely operated through the Internet, using software called Ciclope Astro. Its primary goal is to observe the sun in the H-alpha band and spot new solar protuberances. Sanchez, who directs the observatory, said Gloria will use the same software. The goal is a new robotic telescope social network — the website is gloria-project.eu — with a vibrant, autonomous community, voting on its own choices and self-policing its members.

This “karma” method may be one of Gloria’s most unique aspects. Members will vote on the ideas and productions of other members, establishing and maintaining reputations to get telescope time, Sanchez said. He’s still working on the metrics, but member karma will be calculated every day, which will help determine who gets to control which telescope.
“If we have 1 million people connected to Gloria, we cannot have a committee of experts making a decision. But this is the traditional way of doing science — when you have a big telescope, a lot of money is dedicated to that,” he said. “But we’ve been doing that for 200 years. We can do something more dynamic.”

A screengrab shows what a robotic telescope network user would see, using the Ciclope Astro software. A new network called GLORIA, for GLObal Robotic-telescopes Intelligent Array, will connect robotic telescopes around the world, and make them available for free use by amateur astronomers. This shows an unfocused image of Jupiter and two moons.

It works, for the most part, on websites like Digg, YouTube and eBay, where community members vote and rank members, Sanchez said. Quality producers rise to the top. “Nobody is controlling it; it’s controlled by the community,” he said.

Along with amateur astronomy, citizen astronomy is a rich and growing field, with legions of volunteers signing up for assignments through the Zooniverse project. Since it started in 2007, hundreds of thousands of volunteers around the world have logged into the Zooniverse and studied solar diagrams, Hubble telescope images, Kepler space telescope light curve data and more — for fun, sure, but also for real science. Sanchez hopes Gloria will inspire the same excitement. Organizers have not determined a goal yet — amateurs might be asked to look for exoplanets, sunspots or near-Earth objects. But they’ll also be able to look for whatever they want, a prospect that intrigues amateurs like Mike Markiw, a Pittsburgh-based astronomy enthusiast who has worked with Planet Hunters.

“Everything I have done in the past has been more on the data analysis side. With Galaxy Zoo and Planet Hunters, they have already gathered the data with professional observatories or automated sky surveys, and the people that contribute to those projects analyze the data,” he said. “Gloria is a much different concept. This gives us a chance to generate the data, which some professional astronomer somewhere might go, ‘You know, that’s interesting, and that may apply to this thing over here.’ In a lot of ways, it’s very new for a citizen science project of this scope.”

Markiw said he would probably sign up, connecting to international telescopes along with his own 3.5-inch refractor and 8-inch Dobsonian.

Sanchez said Gloria will likely start with viral invitations, allowing new users to invite their friends, a method that has worked for other social networks like Spotify and Google. He’s confident it will catch on quickly, judging by past success with SkyLive, a worldwide Internet service that broadcasts solar flares and eclipses. The July 11, 2010 solar eclipse from Easter Island aired at the same time as the FIFA World Cup final — between the Netherlands and Sanchez’s home country of Spain, no less — and it still had 50,000 viewers, he said.

“So this is a very important audience,” he said. “If you say you are going to give telescope time for free, many people will participate.”