ALMA is the best way to see these births in super-fertile galaxies, which helps scientists understand how galaxies form. 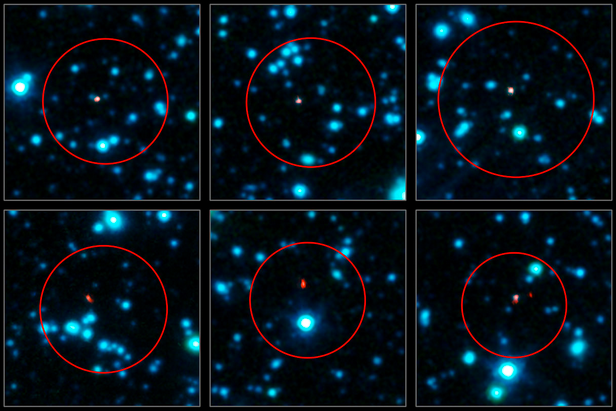 Birth is messy, for stars as for anything else, and it can be hard for astronomers to see through the dirt and crud. This is especially true in distant, very old galaxies, which also happen to be some of the most fertile galaxies. To better understand how stars in these galaxies are born, astronomers need to see through the dust surrounding them–the interstellar afterbirth, if you will. This takes a telescope that can see long wavelengths of light, around one millimeter. It takes a telescope with some soul.

The newly christened Atacama Large Millimeter/submillimeter Array can do it better and faster than any observatory to come before it. This week, astronomers report using ALMA for just a few hours, and making new sensitive observations of these star-forming regions in the early universe. ALMA is so powerful that it did in a few hours what it took other telescopes decades to achieve.

“ALMA is so powerful that it has revolutionized the way that we can observe these galaxies, even though the telescope was not fully completed at the time of the observations,” said lead study author Jacqueline Hodge of the Max Planck Institute for Astronomy in Germany, in a statement.

Prior to ALMA’s observations, the best map of these galaxies was with an ALMA precursor, the Atacama Pathfinder Experiment (APEX). Perched at the ALMA site 16,400 feet above sea level in the Chilean Andes, APEX’s 12-meter dish surveyed a piece of sky in the southern constellation of Fornax (the Furnace) about as big as the full moon. It found 126 galaxies, but they were fuzzy blobs, and so not very useful to study. ALMA is an array of 66 of these dishes (16 of those are slightly smaller), making it much more sensitive.

ALMA was able to spot the same galaxies within two minutes each, pinpointing them in a region 200 times smaller than the APEX blobs and at triple the sensitivity. Put another way, ALMA doubled the total number of these observations ever made–spread over more than a decade–in a couple hours, and with unmatched precision.

The main reason this is helpful: ALMA was able to tease out the blobs and identify numerous galaxies, where in other observations, what looked like a single blob was actually numerous objects. This makes astronomers more comfortable, because it means the blobs were not birthing ludicrous amounts of stars, which would have made them unstable. “The ALMA images revealed multiple, smaller galaxies forming stars at somewhat more reasonable rates,” said Alexander Karim of Durham University in the UK.

The paper is published in the Astrophysical Journal. Go here to read more about the amazing ALMA telescope.