It's the first picture of Sagittarius A*, the Milky Way's central black hole. 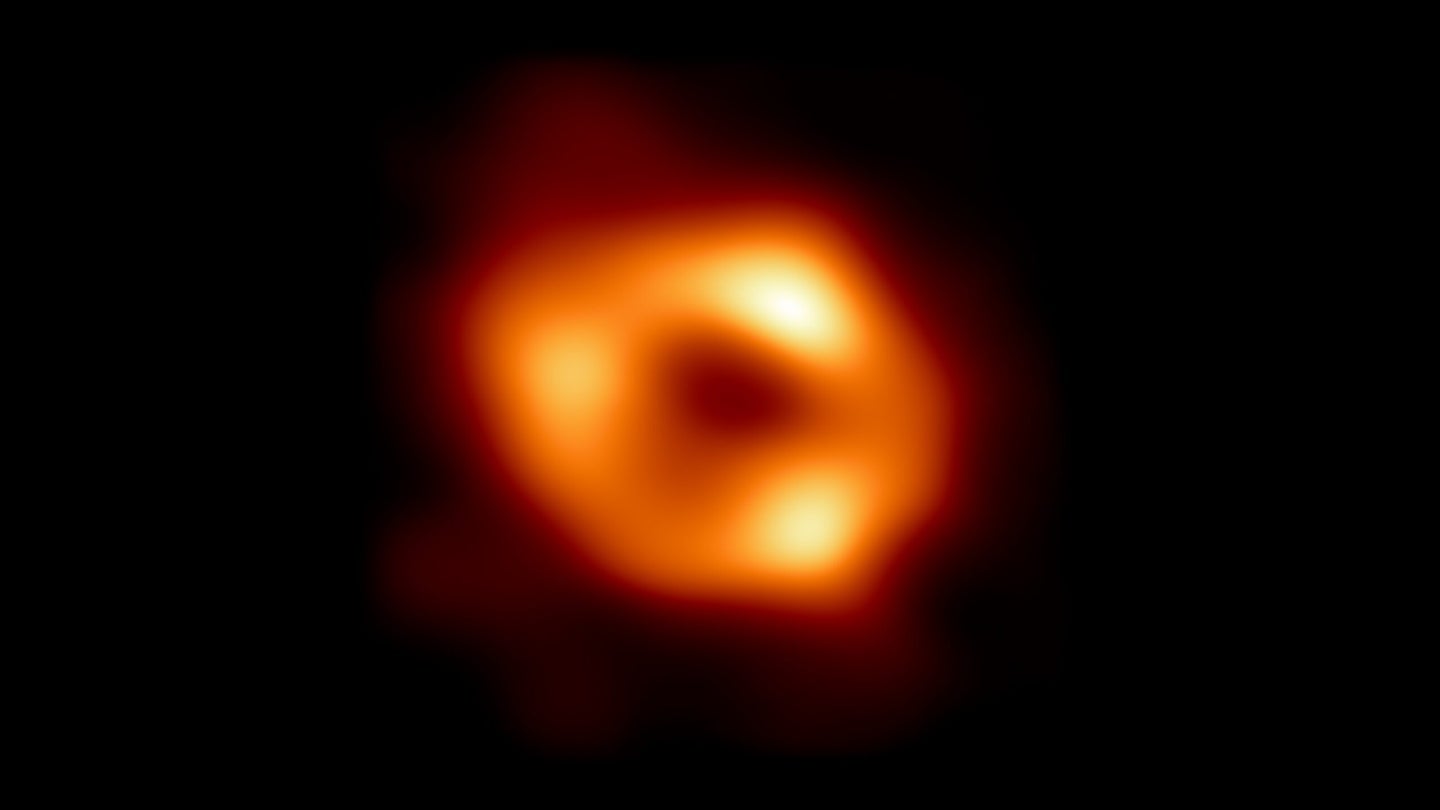 The black hole was captured by the Event Horizon Telescope, an array linking together radio observatories across the planet. EHT Collaboration
SHARE

Astronomers have just revealed the first image of Sagittarius A*, a supermassive black hole in the center of our Milky Way galaxy—so heavy that it warps spacetime such that even light can’t escape. The Event Horizon Telescope, an international collaboration of radio observatories, released the picture Thursday, which appears as a glowing wreath of superhot gas surrounding a void of light that is the black hole’s event horizon.

The findings are the best evidence yet that there is a supermassive black hole in the center of our galaxy, 27,000 light-years away. And it appears to be spinning. This groundbreaking achievement follows the team’s first image, made public in 2019, of a distant black hole called M87* that’s located beyond our galaxy. What’s more, the shape and size of this black hole further confirm what Albert Einstein’s theory of general relativity would have predicted.

The new result is “massively exciting,” especially because it’s from our own Milky Way, says Vikram Ravi, an astronomer at the California Institute of Technology who was not involved in the project. Pairing this image with other observations of black holes will help astronomers understand the life cycle of black holes.

The Event Horizon Telescope uses telescopes from all over the world that work together to make one Earth-size camera for imaging black holes. The collaboration involves over 300 scientists from institutions in more than 20 countries.

They took thousands of pictures of the black hole and used an algorithm to combine them to emphasize the common features that showed up across many photos. The resulting orange-on-black image is a composite of these images.

With a diameter of about 3.7 million miles, Sagittarius A* has a mass “4 million times greater than that of our sun,” project member Sara Issaoun, an astronomer at the Center for Astrophysics | Harvard & Smithsonian, said during a press conference Thursday at the European Southern Observatory. But it is so far away that the space it takes up in the sky is comparable to how a donut on the surface of the moon would appear to us on Earth.

The image shows a black hole that looks very similar to M87*, although these holes exist in vastly different celestial environments. M87* is about 1,600 times larger and surrounded by a much larger and denser swirl of hot gas, called an accretion disk, that it’s actively feeding on.

Sagittarius A*, though much closer to us, was more difficult to image than M87*. Because the Milky Way is disk-shaped, astronomers had to look through clouds of dust and debris to peer at the dense heart of our galaxy where the supermassive black hole was thought to lie.

The gas orbiting close to both black holes is traveling close to the speed of light. But because Sagittarius A* is so much smaller, that gas takes only minutes instead of days to circle the black hole, creating an ever-changing view that’s much harder to snap a picture of.

But studying a black hole that changes so quickly has some scientific benefits. Astrophysicists can start to understand variability in black holes—what happens to orbiting gas as it flares up, brightens and dims, and eventually falls into black holes.

The result, long-awaited by the astronomy community, “looks spectacular,”  says Matthew Graham, an astrophysicist at the California Institute of Technology who was not involved with the project. Graham is most interested in seeing how scientists can use the technical details of the observation to better fit their models of black holes to real data.

Though the gas around Sagittarius A* is swiftly swirling, the black hole is only slowly nibbling on its surroundings. If the black hole were scaled down to the size of a person, that human-size black hole would eat matter equivalent to just one grain of rice every million years, Issaoun says.